Grunts To Get High-Tech Targeting Goggles In 2019 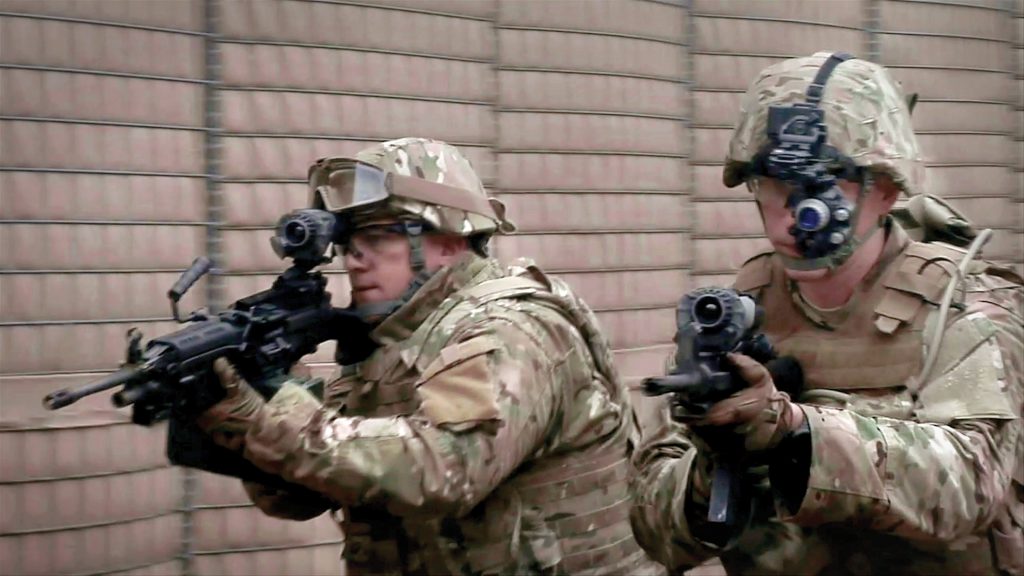 Soldiers testing the newest Enhanced Night Vision Goggle, the monocular ENVG-III, wirelessly linked with FWS-I gunsights on their weapons to improve their aim.

Sometime next year, American infantry will start donning high-tech goggles that show precisely where their weapons are pointing, shaving precious seconds off reaction time in combat. By the end of 2019, they’ll be able to flip a switch and see tactical intelligence from the battlefield network — like pointers to distant friends, enemies, and objectives — superimposed over their field of view like a militarized Google Glass. 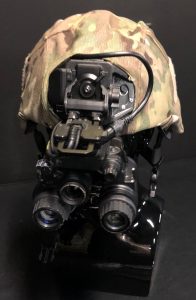 The Army and Marines will buy 10,000 of the ENVG-B augmented-reality sights in the first three years. They ultimately aim to get 108,000, enough to equip every close-combat infantryman, scout, combat engineer, and special operator.

In testing, “we got a 100 percent increase in the soldiers’ ability to hit the target the first time,” the Army’s acquisition chief for individual gear, Brig. Gen. Anthony Potts, told reporters earlier this month at AUSA. Intrigued, I followed up with some of his subordinates in Program Executive Office (PEO) Soldier.

Now, this kind of effort to get fighter-jock technology to ordinary grunts — who do most of the fighting and dying — has enjoyed some high-profile attention in the last 12 months:

But technology like this takes time, and the Army’s been quietly working on these goggles for years. The difference top-level attention makes? Speed and scale. You may not be able to make your engineers invent things faster, but once the tech is ready, you can field it much faster and in much larger numbers. 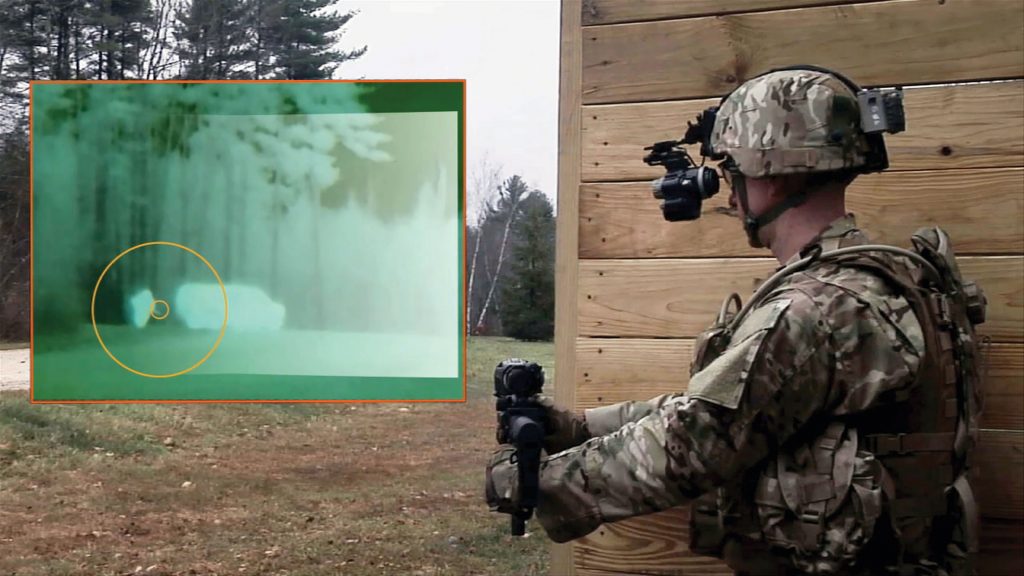 From Night Vision To Augmented Reality

As Lt. Col. Toby Birdsell and Capt. Joshua Redmond, Product Manager and Assistant PM for Soldier Maneuver Sensors, explained to me this afternoon, the service has been taking a step by step approach: 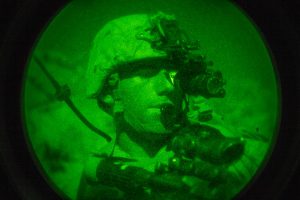 A view of the current Night Vision Goggle, through another Marine’s NVG

Today, most soldiers and Marines have access to Night Vision Goggles (NVGs) with low-light Image Intensification (I-Squared), which picks up visible light and amplifies it into the characteristic grainy green image made familiar by action movies and video games. Most soldiers can also add infrared sights to their weapon, which picks up body heat to pick out targets through darkness, foliage, or camouflage. Threats tend to stand out more obviously in heat vision than in low-light vision, while low-light provides the greater detail you need to identify a threat and aim. But troops can’t look through both goggles and gunsights at once, so they can’t use both low-light and heat vision at the same time. In addition, the gun-mounted sights have a much narrower field of view than goggles. 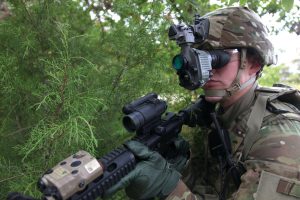 About 15,000 troops — less than 15 percent of the “close combat” force — have Enhanced Night Vision Goggles which combine Image Intensification and infrared in a single scope. So instead of switching from goggles to gunsight and back, a soldier can get both types of vision, low-light and heat, at the same time and with goggles’ wider field of view.

But these early model ENVG-Is and IIs are still pretty bulky. They’re also just night sights, with no added functionality like a built-in targeting crosshairs. But that’s coming soon. 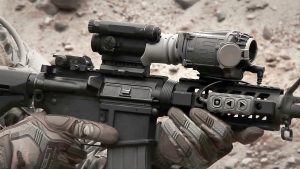 The new FWS-I gunsight (Family of Weapons Sights – Individual) can link wirelessly to the ENVG-III and ENVG-B to improve the wearer’s aim.

Built by BAE and DRS, the next generation ENVG-III — now in final qualification trials and set to enter service in 2019 — is not only slimmer but adds an entirely new feature: Rapid Target Acquisition. In development since 2014, the ENVG-III goggle connects wirelessly with the Army’s new FWS-I gunsight, with data flashing from one to the other in about 60 millseconds, effectively instant.

If the gun’s pointed at something in the goggle’s field of view, the goggles can superimpose crosshairs (a “reticle”) showing exactly where your shot will land. This lets you shoot from the hip with the same accuracy you’d get from throwing the weapon to your shoulder, closing one eye, and peering down the gunsight. In early testing, that saved on average three to five seconds, a potential life or death difference. More subtle, but arguably more important: You no longer have to choose between being able to turn your head freely to look around (using the goggles) or being able to aim precisely (through the gunsight), since the goggles do both functions. That lets soldiers switch much faster from a wide scan for threats to a narrow focus on targets and back again.

If your weapon isn’t pointing at something in your goggle’s field of view, you can switch on a “picture within picture” mode to see what the gunsight’s seeing. That’s potentially distracting, as anyone who’s tried to watch two sporting events at once can attest, but it offers a virtual eye in the back of your head whenever you want it.

As cool as all this is, the Army’s only planning to buy about 19,000 ENVG-IIIs. That’s because the next model will come along months later. 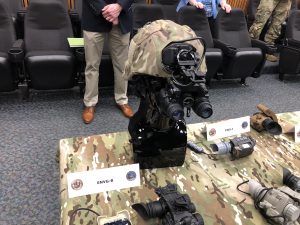 By the end of 2019, the Army will start fielding the ENVG-B. That’s “B” for binocular: All the earlier goggles go on one eye only, giving you monocular vision. Built by prime contract L3, the ENVG-B has a separate tube for each eye, giving you vastly better depth perception.

Being able to judge distances better is helpful not only for aiming but for moving — all the walking, shuffling, running, and jumping over uneven ground that foot troops do to stay alive. Infantry don’t fight on perfectly flat, featureless surfaces: Their ability to cross any terrain and take cover anywhere is their huge advantage over vehicles, the thing makes the individual human being on foot still lethally relevant in modern warfare.

The ENVG-B’s other big advantage is it introduces augmented reality (AR). Popularized in civilian life by consumer novelties like Google Glass and Pokémon Go, AR superimposes virtual imagery over the real world. It’s similar to how the Heads Up Display (HUD) in a fighter cockpit displays pointers to friendly and enemy aircraft too far away to see. For foot troops, the value would be displaying tactical data, whether that’s as simple as a compass bearing — getting lost is a time-honored tradition in the infantry — or as sophisticated as a red warning that enemy troops are over the next hill.

Now, troops already have access to all this data from the tactical network using Nett Warrior or Android Tactical Assault Kit (ATAK) devices , but to see it, they have to look down at a screen. That takes their eyes off the real world around them, never a safe thing to do in a combat zone. ENVG-B’s augmented reality will let them see the data they need while still watching for threats. Squad leaders and even individual soldiers can also customize their displays, filtering out data they don’t need for a particular mission so they can focus without distractions. 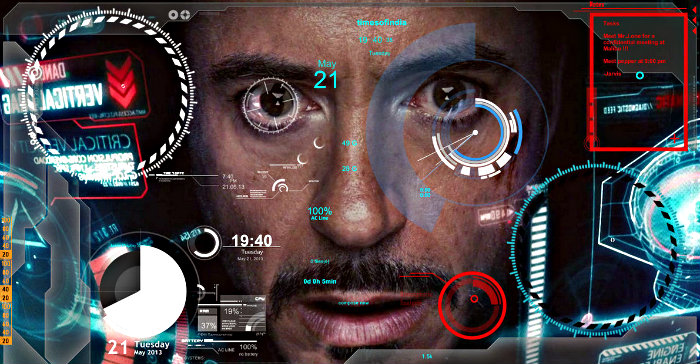 ENVG-B still has significant limitations. Battery life is about 7.5 hours at maximum usage, for a start. That said, most troops won’t walk around with the cross-hairs or picture-within-picture all the time, and the designers are constantly tweaking software to make the system more energy efficient. But on long patrols, you’ll need extra batteries, and that weight adds up.

Most important, the field of view is still only about 40 degrees, twice as wide as a typical gunsight, but a fraction of the 200-plus-degree arc of your unaided eye. (That’s including peripheral vision: While you can’t aim at something out of the corner of your eye, you can see motion and react to the potential threat). 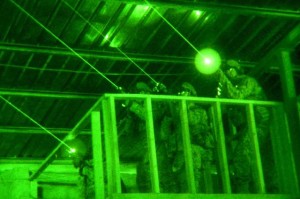 It is a trade off, Lt. Col. Birdsell told me: “You have a much wider field of view when you don’t have a goggle in front of you.” The Army has training and doctrine experts working on Tactics, Techniques and Procedures for various situations, when to use the goggles and when not. Meanwhile he and his acquisition corps colleagues keep working to improve the technology so those limitations go away.

The long range plan is to use the augmented reality to superimpose virtual enemies on real terrain for intense training — Pokémon Go with Russians and terrorists instead of adorable mini-monsters — and to expand the field of view into the infantry equivalent of a fighter pilot’s HUD.

But foot troops aren’t fighter pilots, with their million-dollar training programs: Can they really cope with all this new technology? The Army standard for introducing a new system is two weeks of training. But the program has already had five “soldier touchpoint” events where they handed the still-in-development ENVG-Bs to real troops for testing — a sixth is coming up next month — and soldiers are giving valuable feedback after just four hours of familiarization.

In fact, troops are learning to use Rapid Target Acquisition and the augmented reality overlay “in about an hour or two,” Capt. Redmond told me. “The younger generation, this stuff is intuitive to them.”