Guard Association (NGAUS): We Can Work With CSA Gen. Milley 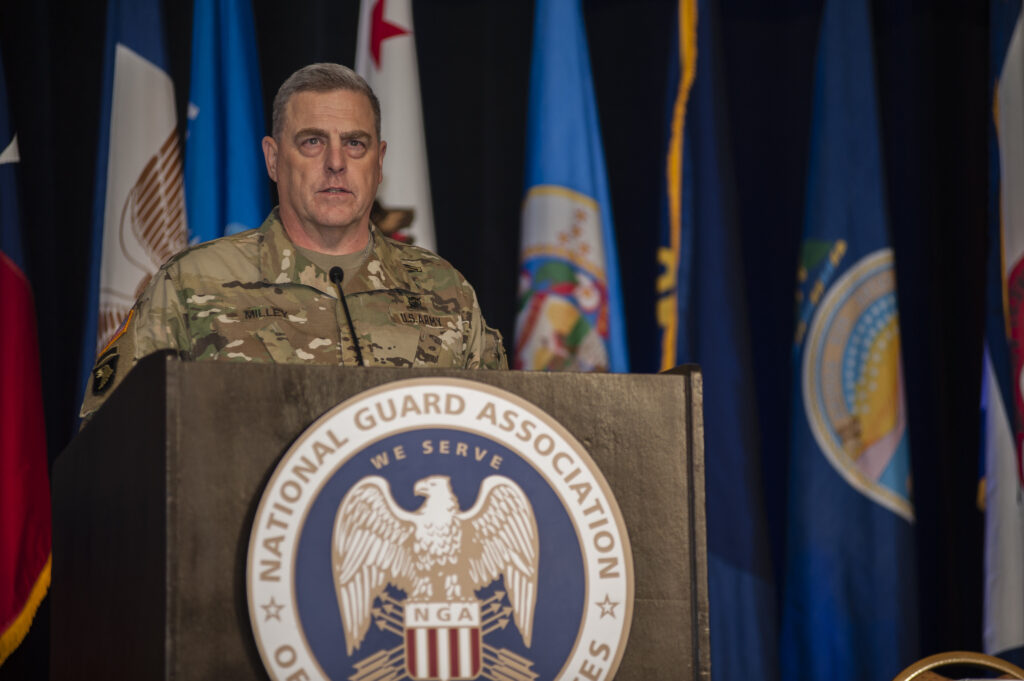 Gen. Mark Milley addresses the National Guard Association of the US

WASHINGTON: The powerful National Guard Association of the US spent a year and a half battling the last Army Chief of Staff, Gen. Ray Odierno, over everything from Apache gunships to readiness. NGAUS president Gus Hargett has a very different take on Gen. Mark Milley, who replaced Odierno August 14.

“I found him to be very refreshing,” said Hargett, who has met with Milley. “There’s a new guy in town who’s going to do things his own way,” the retired Guard two-star told me in an interview. “He will be open to what the Guard’s got to say. He’ll be honest with us if he disagrees with us.” 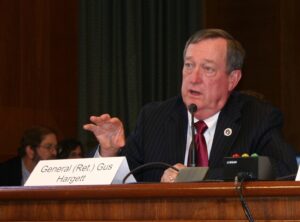 Less than a month after becoming Chief of Staff, Milley spoke to NGAUS’s annual conference — an event Odierno had stopped attending. Hargett said he was encouraged not just by what Milley said in Nashville but by how hard he worked to get there.

First, the newly confirmed Chief shoehorned NGAUS into his schedule between a visit to Fort Campbell, Kentucky and an overseas trip to Asia. Then, on the actual day, bad weather grounded Milley’s aircraft at Fort Campbell. Rather than give up, the Chief and his aides just got into a car and drove. He was late and didn’t have time to change from camo into his dress uniform, but Milley made it.

“That speaks volumes,” Hargett told me. So did the subsequent conversation Milley had with state Guard commanders (called adjutants-general) and Hargett. So do visits to Guard units by Milley’s staff. So does the inclusion of two adjutants-general on Milley’s transition team — old-hat for the Air Force but not in the Army.

In his NGAUS speech itself — by far the most popular video (above) NGAUS has posted in six months — Milley was relaxed, cheerful, and remarkably funny. (He jokingly demoted three generals in a row for asking him difficult questions, which he answered anyway). His rhetoric certainly pleased the Guard crowd, which interrupted him repeatedly with applause.

But how about the substance? Milley made very clear he was making no promises, just thinking aloud and seeking advice. As he did in his confirmation hearing, he deferred major decisions to the ongoing Commission on the Future of the Army, whose report is due Feb. 1st.

Milley demurred especially hard on the single most controversial issue between Army leadership and the Guard, the transfer of all the Guard’s Apache helicopters to regular active-duty units as part of the controversial Aviation Restructure Initiative.

“That ends the conference!” Milley joked, pounding the gavel, when a Guard general asked him about the helicopters. Then he got serious. “I am not going to stand here and say, ‘oh yeah, I’m going to reverse this,’ because that’s a decision made prior to my time as Chief. It was already a decision by the Secretary of the Army. It’s been validated every which way but Sunday…I’m not going to make false promises in front of a crowd [where] I know it would be really popular.”

On other fronts, however, Milley said things that — while not promises — sounded surprisingly encouraging to Guard ears. He proposed restoring “roundout” units in which a Guard force is an integral part of a larger regular active-duty formation, called up to “round it out” in times of war; or, he said to Guard applause, maybe an active unit will round out the Guard. He suggested the Guard might need more paid days of training than the traditional 39; Guard leaders often complain of the unpaid time their more technical troops must put in to stay current. He said Guard units might need larger cadres of active-duty personnel assigned to them, on the model of the Marine Corps Reserve.

Most dramatically, Milley wants to double, from two to four, the number of Guard combat brigades that annually attend wargames at top-flight Combat Training Centers. The Army’s been hard-pressed in recent years to fund CTC rotations for active-duty units, let alone the Guard, so for Milley to make this a priority is significant. How quickly Guard units can get combat-ready in a crisis is a bone of bitter contention, and Milley’s measure — if funded — would double the number of Guard brigades at the highest level of readiness.

That said, going from two brigades to four is still a relatively small part of the force. The Guard alone has 28 brigade combat teams: seven armored brigades that would train at Fort Irwin, California; 20 infantry brigades that would train at Fort Polk, Louisiana, and one Stryker brigade (infantry in light armored vehicles) that could go to either. At Milley’s suggested four rotations a year — assuming two at Irwin and two at Polk — Guard soldiers in armored units would get top-level training at a CTC once every four years, but infantry only once a decade.

“Down the road,” Hargett told me, “maybe the answer’s five, maybe the answer’s six [Guard brigades going to CTCs a year].” But there are both fiscal and organizational costs to consider, he said: Sending a brigade is hard not just on the unit itself but on the state that supports it.

Nevertheless, the bottom line is that going from two-CTC trained Guard brigades to four, “you double your readiness,” Hargett said. “It gives you more brigades ready to deploy.”

In general, “it’s readily obvious to me that I need to employ more of the Guard, not less,” Milley told the Guard conference. “There are operations around the world today that are ongoing, and there are contingencies that are always a potential [e.g. a war], and I believe that I can get the guard into those missions.”

“We’re going to get smaller,” Milley said bluntly, pointing to the ongoing budget agonies. “Because of that…. I’ve got to maximize every amount of capability out of all the piece parts of the Army. And I believe — because of what I’ve seen over the last 10-15 years — I believe that I can get a lot more out of the Guard.”

“Exactly how that translates into dollars,” Milley said, “I don’t know yet, but I should know relatively shortly.”

Then Milley turned on an aide: Got those figures yet? Well, sir, the staffer replied, it depends on which missions you want them to do….

Milley’s decision-making process is “transparent,” Hargett said approvingly. In the past, Army leadership often came to decisions behind closed doors and handed them down from on high, much to the Guard’s frustration, Hargett said. “I don’t think you’re going to see him be that way.”

But is Milley merely enjoying a honeymoon period, simply by the virtue of not being Odierno, of not having been on the frontline of the fights with the Guard — not yet? Will the same fundamental tensions and tightening budgets lead Milley and the new Army leadership into the same conflicts, or is he different enough to achieve a different result?

“I believe that he is different enough, with a different leadership style, and will be inclusive enough that he will be able to make decisions without alienating all of the components of the Army,” Hargett said.