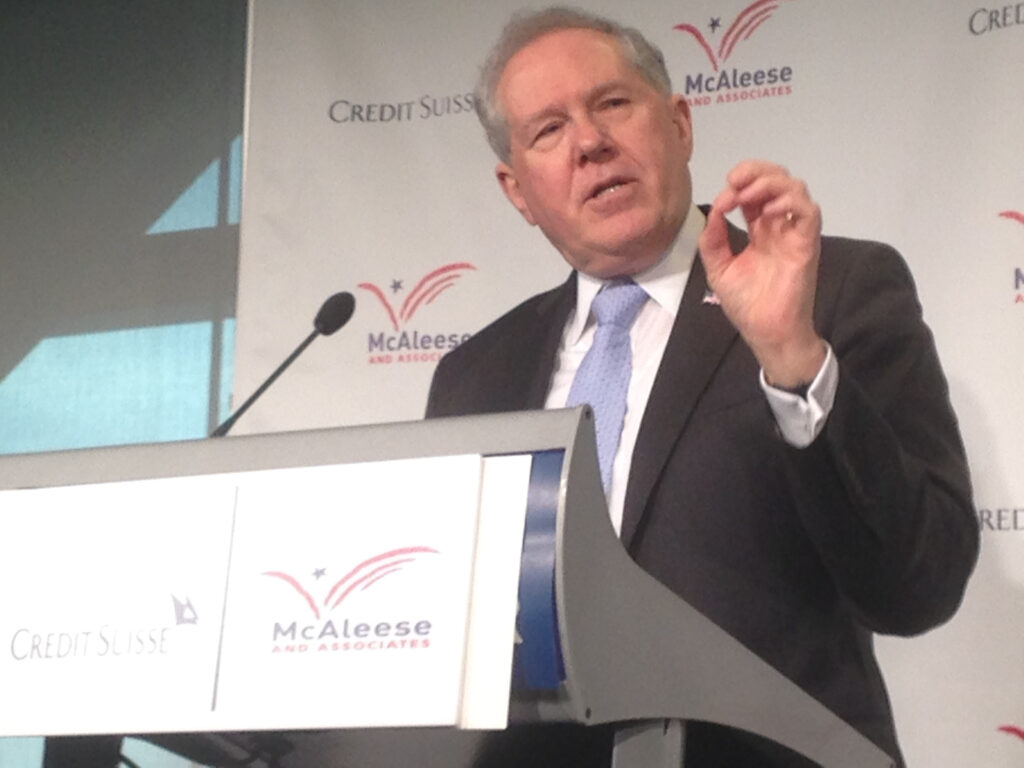 WASHINGTON: The Defense Department has told its big industry partners for most of the last 15 years that there’s no need for consolidation at the top. Lockheed Martin, Boeing, BAE Systems, Raytheon, General Dynamics and Northrop Grumman are big enough, they said. Mergers of prime contractors would limit competition, Ash Carter, Frank Kendall and other officials told industry year after year.

Then Lockheed Martin bought Sikorsky. Most close observers thought this would be approved and it was. After all, Sikorsky makes helicopters, Lockheed doesn’t. But something about the deal prompted a reaction from the top acquisition official at the Pentagon.

“The Department of Defense (DoD) is concerned about the continuing march toward greater consolidation in the defense industry at the prime contractor level. While the Lockheed-Sikorsky transaction does not trigger anti-trust concerns of having a negative impact on competition and we understand and agree with the basis upon which the Department of Justice (DOJ) decided not to issue a request for additional information about the transaction, we believe that these types of acquisitions still give rise to significant policy concerns,” Kendall, undersecretary for acquisition, technology and logistics said in a statement.

While Kendall made clear under reporters’ questions that he was not talking about the Lockheed-Sikorsky merger alone, he went on to say this: “However, this acquisition does result in a further reduction in the number of weapon system prime contractors in the Defense Industrial Base. Over the past few decades, there has been a dramatic reduction in the number of weapon system prime contractors producing major defense programs for the DoD. This transaction is the most significant change at the weapon system prime level since the large scale consolidation that followed the end of the Cold War. This acquisition moves a high percentage of the market share for an entire line of products – military helicopters – into the largest defense prime contractor, a contractor that already holds a dominant position in high-performance aircraft due to the F-35 winner-take-all approach adopted over a decade ago.”

Lockheed took the pretty extraordinary step of using the megaphone of my Reuters colleague Andrea Shalal to fire back at its biggest customer, the Pentagon. “There is no evidence to support the view that larger defense companies reduce competition or inhibit innovation,” Lockheed spokesman Dan Nelson told her in a statement. “We believe that defense contractors should continue to be assessed based on the performance and effectiveness of the products and solutions offered, not on the size of their company.”

But Kendall’s argument is subtle and pretty compelling: “With size comes power, and the Department’s experience with large defense contractors is that they are not hesitant to use this power for corporate advantage. The trend toward fewer and larger prime contractors has the potential to affect innovation, limit the supply base, pose entry barriers to small, medium and large businesses, and ultimately reduce competition – resulting in higher prices to be paid by the American taxpayer in order to support our warfighter.”

And he made clear that there may be the need for legal changes to protect that innovation and competition, saying, “the Department is convinced that we should work with the Congress to explore additional legal tools and policy to preserve the diversity and spirit of innovation that have been central to the health and strength of our unique, strategic defense industrial base, particularly at the prime contractor level.”

He didn’t offer any details, but Kendall did offer a hint when he told reporters that the Department of Justice review of the merger focused on “direct competition. And Lockheed is not a helicopter manufacturer. That was at the heart of the Department of Justice determination.” Then he said that an “obvious” legal change would be  to include “a provision that took national security considerations into account.”

The powerful Aerospace Industries Association weighed in, with its president, David Melcher, saying “we feel consolidation is occurring as a natural result of decades-long trends in defense acquisition. Consolidation is market-driven and enhances the efficiency with which we deliver the world’s best equipment to the American warfighter.” Melcher offered the interesting counterargument that industry is “seeing fewer and fewer new programs which start farther and farther apart. With fewer programs for which to compete, the stakes for individual companies grow ever higher – loss of a contract competition could mean the end of a company’s ability to compete for defense work.  In this environment, it’s no surprise that industry is looking to become leaner and more efficient.”

He compared the present situation to that which preceded the famous Last Supper. “We’ve seen how this works in the past – sweeping defense industry consolidation happened during the last downturn in defense spending in the 1990s.  Many of the same conditions are apparent now,” Melcher said. “The size of the prime contractor shouldn’t matter in any case, as most of the work flows into the supply chain through subcontracts.”

The Lockheed-Sikorsky merger was not the first of two large companies in this new era. So far, we’ve seen ATK and Orbital merge, And BAE famously and unsuccessfully tried to buy Airbus (then EADS).