Posted by Theresa Hitchens on September 11, 2019 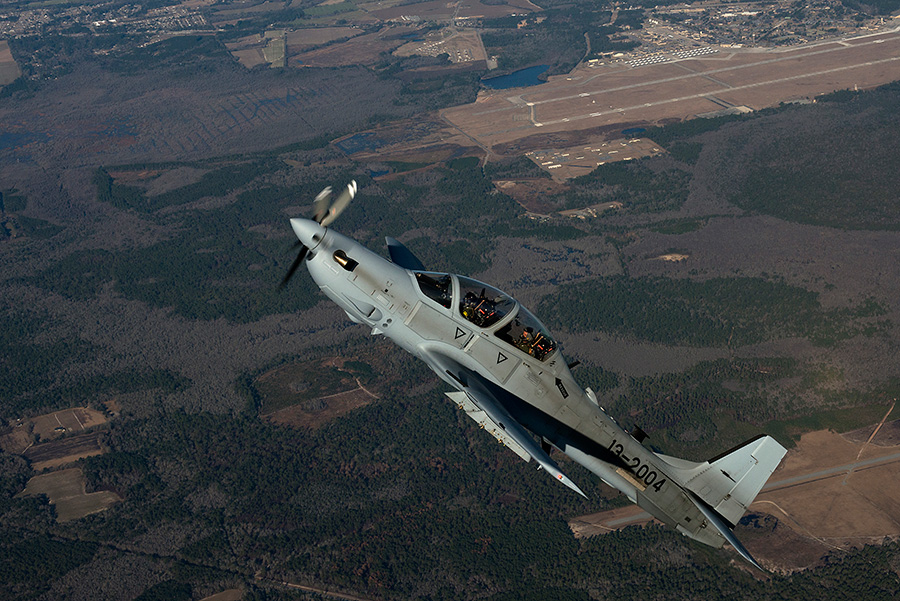 CAPITOL HILL: A handful of congressmen are pushing hard for the House-Senate Conference Committee on the 2020 NDAA to include a provision that would transfer procurement authority for the Light-Attack Aircraft (LAA) to Special Operations Command if the Air Force does not proceed with a buy.

“My frustration is almost palpable at why it is taking so long to get this platform out where the warfighters need it,” Rep. Mike Waltz, a retired Green Beret and a member of the House Armed Services Committee (HASC), told a Mitchell Institute briefing today. “In that vein, if the Air Force can’t or doesn’t want to or isn’t moving fast enough to get it out there, then we’ve introduced legislation to shift that authority over to Special Operations Command.”

The Light Attack Aircraft debate has been “inching along” since at least 2009, Waltz said. “This is a capability and need that special operators serving in 60 or 70 countries around the world need, and have needed for many years.”

Rep. Jason Crow, a former Army Ranger also on the HASC, echoed Waltz’s frustration. “My support and interest in this program since joining this Congress was borne out of my personal tactical experience,” he said.

The language, buried in a bipartisan amendment to the House bill sponsored by Rep. John Rutherford, a member of the House Appropriations Committee, would force the funds transfer within 60 days after SOCOM certifies there is a special operations acquisition requirement for the platform, “should USAF not execute the appropriated funds for this program,” Alex Lanfranconi, Rutherford’s press secretary said in an email. He added that: “SOCOM testified several times this year that this is an urgent need for their mission.”

“Currently, the House and Senate versions of the NDAA are being conferenced and he is hopeful that the final version will include his amendment,” Lanfranconi said. (Rutherford will not be a member of the Conference Committee, as those slots are reserved for members of the House and Senate Armed Services Committees. As of yet, membership hasn’t been announced.)

The language was cosponsored by five other representatives — all of whom are from Florida, home to SOCOM’s MacDill AFB in Tampa. Indeed, Crow — who represents Colorado — is the only non-Floridian lawmaker to cosponsor.

The House version of the NDAA included $35 million for the Air Force to continue its current experimentation with the competing Light-Attack Armed Reconnaissance (LAAR) platforms, Textron’s AT-6 and the Sierra Nevada/Embraer A-29, to develop operational concepts. (That experimentation, ongoing since at least 2011, includes looking more closely at their use by allies, such as Afghanistan and Lebanon, who both own small numbers of the A-29, for counter insurgency operations, and assessing how many the Air Force and allies might buy.)

But it made very clear its impatience with the Air Force’s decade-long dithering over whether to buy a light-attack aircraft for close air support, following Acting Air Force Secretary Matt Donovan’s surprise announcement in January that the service had reversed its plans to issue a request for proposal by December. Air Force budget documents released in March included a request for $35 million to continue the LAAR tests, and put down a marker for 24 aircraft over the next five years.

According to the House NDAA language, the Air Force has been planning to “apply $100.0 million in fiscal year 2018 appropriated funding, and plans to request reprogramming authority to realign $25.0 million in fiscal year 2019 appropriated funding, to purchase six test article LAAR platforms (three AT-6 and three A-29  aircraft) to continue Phase 3 experimentation activities.”

Meanwhile, the Senate Appropriations defense subcommittee’s 2020 budget bill passed Sept. 10 recommends “Recommends $210 million for 6 O/A-X Light Attack Aircraft.” O/A-X refers to the Air Force’s rapid acquisition program for the six aircraft — for which the service did not request any 2020 funds. 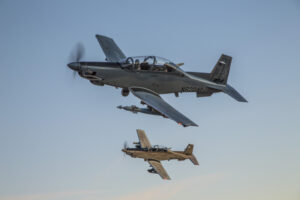 Air Force budget documents say that the LAA eventually could: “provide a deployable and sustainable multirole attack capability, capable of performing a diverse array of attack missions, including but not limited to, Close Air Support (CAS), Armed Reconnaissance, Strike Coordination and Reconnaissance (SCAR), Airborne Forward Air control (FAC-A), and Interdiction. Other tasks for which Light Attack aircraft is expected to be suitable include Combat Search and Rescue (CSAR), Rescue Escort (RESCORT), and Maritime Air Support (MAS). LAA squadrons executing these tasks allows our 4th and 5th Generation fighter fleets to implement a tailored training regimen to address declining core mission readiness and focus on preparing to deter or prevail in conflicts with peer adversaries. LAA will provide a deployable, persistent attack capability that can be employed with low footprint and light logistical support requirements.”

Phil Clay, a former Navy test pilot for the Imminent Fury/Combat Dragon close air support experiments, told the Mitchell meeting that the Air Force should purchase “at least a wing” of the LAA. “While the numbers of aircraft and the capabilities that they bring to the fight for SOCOM as a whole is something that is obviously near and dear to my heart, I believe that the mission they would conduct would be beyond just the special operations mission,” he said, to include the so-called foreign internal defense (FID) mission to combat insurgencies.

A spokesperson for Sierra Nevada Corp. declined to comment.

A spokesperson for Textron Aviation Defense said in an email: “Textron Aviation Defense looks forward to fulfilling the Light Attack Aircraft (LAA) needs of our nation and its allies. We are aware of the recent amendment effort and continue to maintain open lines of communications with U.S. officials regarding future experimentation and acquisition decisions, activities and timelines.”