Posted by Theresa Hitchens on September 12, 2019 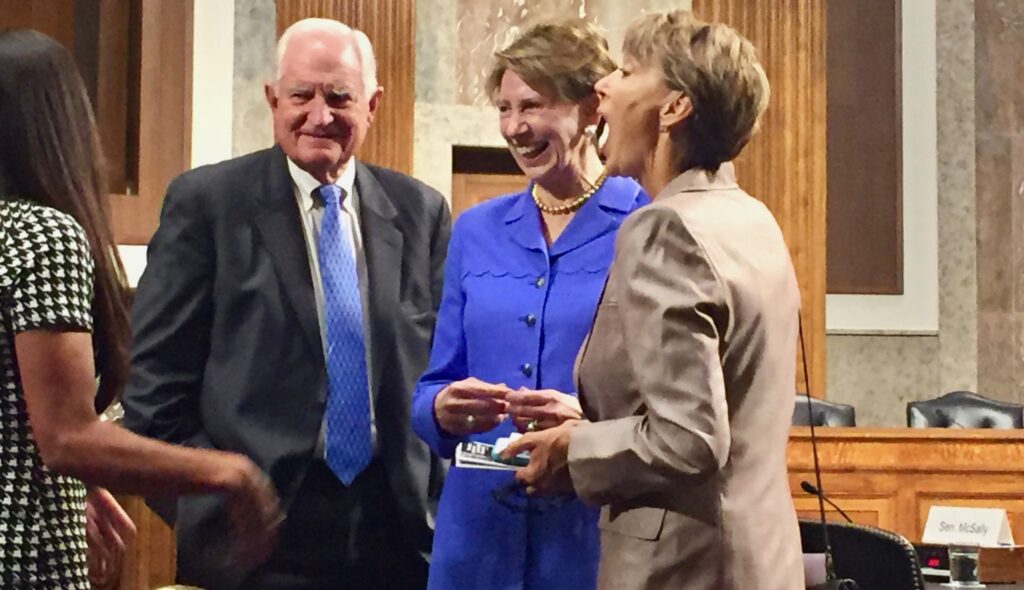 CAPITOL HILL: Barbara Barrett and Ryan McCarthy, nominees for Air Force and Army Secretaries, are likely to be handily approved by the Senate Armed Services Committee (SASC), if today’s hearing is a guide.

The hearing raised no new major policy issues and largely focused on bases, the recent scandal regarding substandard military housing, sexual assaults and the highly politicized battle over the use of military construction funds to build a wall on the southern border.

The only bit of drama came from Sen. Angus King, an independent who thundered his dissent to the transfer of funds to Trump’s wall. “I believe you have been given an illegal order!” he said, demanding that McCarthy provide the legal opinion that allowed funds for 11 military construction programs — funds already appropriated by Congress — to be transferred. “The failure of Congress to uphold its prerogatives,” King opined, “will haunt this institution for years.”

McCarthy quietly, and unsurprisingly, noted that he believed Trump’s demand to be a “legal order,” and resisted efforts by Democrat Mazie Hirono to repudiate what she feared would be a continued “raid” on military funds. Barrett, for her part, responded to Hirono’s push simply by saying she would uphold the Constitution.

The Democrat’s focus (King caucuses with the Democrats) on the border wall prompted the SASC’s Republican Chairman James Inhofe to opine that the term “raid” was inaccurate and that troops deployed to the wall are receiving “better training than at their home bases.”

In a similar vein, Democrat Richard Blumenthal pressured Barrett as to whether she would be willing to issue a ban on Air Force troops and officials staying at Trump properties overseas — a line of questioning piqued by recent revelations that some 60 troops have stayed at Trump’s property in Turnberry, Scotland, and refueled at Prestwick Airport. While answering that she would be willing to “look at it,” she only pledged to look at how to “implement generic rules and regulations” to ensure “best value.”

Barrett is a former U.S. ambassador to Finland (2008-2009). She also served as senior adviser to the US Mission to the United Nations, deputy administrator of the Federal Aviation Administration (FAA) and as  chairman of the board of trustees for the nonprofit Aerospace Corp. She was the first civilian woman to land an F/A-18 Hornet on an aircraft carrier and took astronaut training in Russia.

Her biggest challenge likely will be managing the transition to a Space Force/Corps  — in whatever form it emerges from Congress — as well as managing the relationship between the Air Force’s acquisition activities and the new Space Development Agency (SDA) Her predecessor, Heather Wilson, lost her fight to stave off the change and preserve the Air Force’s current structure for space activities. If confirmed she would be the service’s fourth female secretary.

“If confirmed, standing up a Space Force would be a key imperative,” Barrett said in her opening statement. “I believe we need the Space Force, in fact, in my opinion, a domain-specific service to organize, train, and equip space forces is overdue. Most Americans use space before their first cup of coffee in the morning. Space controls our electricity, water, financial transactions and of course, navigation, information, and communication. While space is ubiquitous, it is also invisible, and therefore often under-appreciated. American national power depends upon space and our potential adversaries know it. We must be prepared to defend critical space assets, increase the resilience of our space enterprise, and be prepared to fight and win should deterrence fail.”

Interestingly, there were almost no questions during the hearing on either Space Force, the Space Development Agency or space acquisition — although Barrett’s answers to the advanced policy questions on those issues were anodyne. This is despite the fact that the Senate has been under pressure from the Trump Administration to bow to the House Armed Services during conference on the fiscal year 2020 National Defense Authorization Act (NDAA) and allow the Pentagon to change Title 10 to create a sixth branch of the military service for space.

Sen. Tim Kane pressed Barrett on her opinion on the need for a set of agreed international rules for managing behavior in space, citing the fact that US investments can be put at risk by the actions of others and vice versa. Barrett said she “absolutely agreed” with Kane’s concern, although rather than offering support for a new rule-based, multinational order she merely mentioned the problem of US assets being “vulnerable to others.”

Questioned by Sen. Deb Fischer about the continued viability of the force structure outlined by Wilson in the 2018 “Air Force We Need” study or whether it would go “on a shelf,” Barrett said that while she couldn’t say if the future force would be made up of the recommended 386 squadrons, that the study is “destined not for the shelf, but for implementation.”

Barrett was by and large accommodating to senators requests to work with them on specific issues of personal interest, and smooth in her answers. Her only misstep came when she became slightly rattled by rapid fire and aggressive questioning by Sen. Tammy Duckworth about the Air Force’s plans to halt its buys of C-130Js. The Air Force requested no funds for the plane (besides to fund a few aircraft for the Marines) in 2020. Barrett mistakenly said she looked forward to acquiring more of them, and upon being corrected by Duckworth, retreated to say that if she is confirmed she would further study the issue.

Barrett’s written responses to pre-hearing questions included her commitment to continued acquisition reform to speed technology ingestion, including her intention to further delegate Section 804 decision-making — a power the Senate has been somewhat leery of. She said that she believes it is “appropriate to procure weapons systems and equipment that have not been demonstrated through test and evaluation when an urgent and clear warfighter need exists, the technical risk is low, the system has been demonstrated in some capacity (including cybersecurity), and the planned procurement is limited”

McCarthy, a former Army ranger, is a choice of continuity and the senators treated him like an old friend. He was unanimously confirmed in his current position as Army undersecretary and has already been acting secretary twice: Once before Mark Esper was confirmed as Army Secretary, then again when Esper was promoted to Secretary of Defense.

McCarthy has been Esper’s pointman on many high-priority — and painful — reforms to modernize the force. Along with Esper, former Chief of Staff Gen. Mark Milley (soon to be Joint Chiefs Chairman), and current Chief (former Vice-Chief) Gen. James McConville, McCarthy formed one of the close-knit gang of four whose grueling”‘night court” sessions scoured the Army budget, cutting or cancelling at least 186 programs to free up over $43 billion dollars for its Big Six modernization priorities: $33 billion in the 2019-2024 fiscal plan, another $10 billion in the 2020-2025 plan now under review in the Pentagon — where Esper now has final say.

While Congress has not yet approved a 2020 budget, let alone the out years, McCarthy & co. have already done a huge amount of the politically painful heavy lifting. The next big hurdle is to move a host of new technologies from cool concept to combat-ready — but as each weapon enters production, it will start building a support base of companies, workers, and their local legislators.

McCarthy stressed that one of his top priorities would be long-range precision fire capabilities — basically artillery and missiles, the No. 1 priority of the Army’s Big Six — and pursuing the introduction of hypersonic weapons and defenses into the force. He noted that he believed the Army’s missile defense capabilities have atrophied and promised to address the issue.

In response to questions from Sen. Marsha Blackburn, McCarthy stressed the importance of the Army’s efforts to move to the cloud to power its modernization plans, as well as its efforts to recruit and retain troops with cybersecurity skills.

Similarly, Barrett responded to a question from King that she would be willing to undertake a comprehensive review of the F-35 supply chain to ensure against exploitation by China.

King asked both nominees about how the Pentagon might obtain intellectual property (IP) rights to allow the services to do their own 3D printing, a controversial issue as industry — particularly commercial start-ups that the Pentagon is hoping to court — naturally is highly reluctant to do so. McCarthy said he “is investigating the challenge” and seeking to “work through that with defense contractors.” Barrett, for her part, agreed that it is a challenge that needs to be resolved to ensure interoperability.