How the Army Can Reduce Risk on Vehicle Program Development [Sponsored] 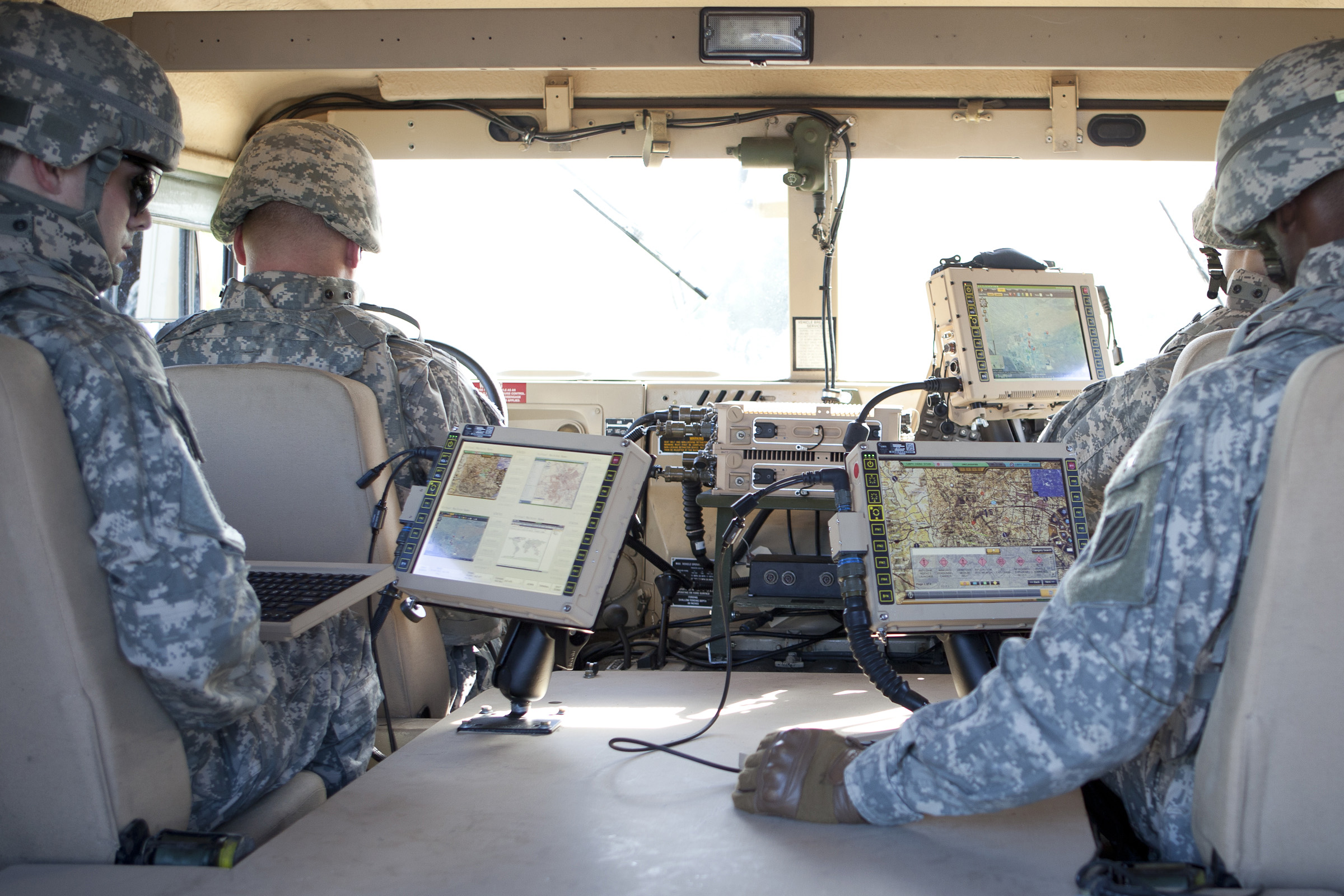 Leonardo DRS’ Mounted Family of Computer Systems is a present-day system that could find application on the future NGCV.

The Army wants its Next Generation Combat Vehicle (NGCV) program to provide a transformational leap in battlefield capability, including the ability for armored vehicles to operate autonomously and in manned/unmanned teaming arrangements. A centerpiece to this modernization effort is the Optionally Manned Fighting Vehicle (OMFV), the Army’s top ground vehicle modernization program.

OMFV is a replacement for the 1980s-era M2 Bradley Infantry Fighting Vehicle, and one of five new ground vehicles that Army Futures Command is developing under the NGCV program. The design for OMFV and each of the other vehicles–which includes two tanks, a personnel carrier, and three robots–will incorporate an open-architecture, plug-and-play capability to mitigate developmental technology risk and keep the NGCV platforms relevant fighting machines over the coming decades.

Successful development of the Optionally Manned Fighting Vehicle depends on lessons learning on technology overreach from earlier vehicle development programs that were cancelled, such as Future Combat System that was cancelled in 2009 and Ground Combat Vehicle that was halted in 2014. To reduce program risk, the Army plans to meld and evolve proven technologies in areas like networks, situational awareness, and cyber/electronic capabilities with next-generation technologies in robotics, directed energy, and artificial intelligence.

That strategy is evident in the OMFV Request for Proposal released earlier this year. The RFP stated: “Since its inception, the OMFV program has represented an innovative approach to Army acquisition by focusing on delivering an essentially new capability to the Armor Brigade Combat Teams while under a significantly reduced timeline, as compared to traditional acquisition efforts. This will be achieved by leveraging existing materiel solutions with proven capabilities coupled with new technologies to meet the requirements.”

A key developmental methodology the Army is using for NGCV is Modular Open Systems Approach (MOSA). It relies upon an open architecture that can evolve, with a focus on standards, interoperability, portability, and modularity. MOSA provides the Army a highly cohesive and loosely coupled software capability that can be reused across programs, providing benefits in cost, schedule, competition, and innovation.

“One of the things that we’ve seen with Army modernization efforts is that the cross functional teams, program managers, and service leadership are all looking for opportunities to be disruptive and embrace urgent out-of-the-box thinking and strategies,” said Bill Guyan, Leonardo DRS senior vice president and general manager of land electronics. “At the same time, they’re working to figure out how to adopt, adapt, and field rapidly changing commercial technologies in computing and other disciplines by making them resilient and robust for use in combat vehicles, while keeping them relevant and up to date throughout the next two decades of computing evolution.

“I think everybody is looking at the rapid evolution in the telecom industry, for example, and how they’ll keep pace with the change? We see changes that are just as rapid and just as varied in the computing environment.”

Guyan points to the Mounted Family of Computer Systems (MFoCS), a program of record that is the core component of the Army’s Mounted Computing Environment, as the type of program that can provide a trusted base and performance growth for future NGCV platforms such as OMFV. MFoCS offers a suite of mission command capabilities that drive command and control and situational awareness through Joint Capabilities Release (the latest version of Force XXI Battle Command Brigade and Below, better known as Blue Force Tracker). MFoCS provides soldiers with a fast satellite network and map updates, secure data encryption, and joint force support.

Through numerous recompetes of the program, Leonardo DRS remained the sole provider of these systems to the Army and the Marine Corps, delivering more than 250,000 of these systems to U.S. forces. The latest contract came in mid-2018 for a $841 million, five year (plus five option years) award to produce the next-generation MFoCS II. It’s a family of systems that will support the continued fielding and upgrades of the Army’s Joint Battle Command–Platform (JBC-P), plus room to grow to support future NGCV development.

MFoCS II improvements include memory and storage media upgrades with solid state hard drives on all devices. The processor unit was upgraded from an Intel Core i7 to the Intel Xeon quad core, which has double the cache capability for faster data display.

Cybersecurity, a critical element in an information-driven battlespace, is also improved through the adherence to the latest international standard for secure cryptoprocessors, which is known as the Trusted Platform Module 2.0. Guyan calls that “edge-assure computing.”

Hardware includes a tactical server that manages internal and external communications, sensor inputs, embedded diagnostics, and software applications on a single display. It also includes a dismountable tablet, an expandable rugged platform computer and 12-in, 15-inch, and 17-inch sunlight-readable rugged displays. All the display surfaces were upgraded from single touchscreen to multi touchscreen functionality, which permits the screen to recognize one or more touches to the surface.

To maximize the value of installation kits for earlier-generation MFoCS systems already installed on Army and Marine Corps vehicles, MFoCS II was designed to be backwards compatible to the footprints of the prior hardware systems.

“MFOCS provides a cost-effective common set of critical hardware that can act as an enabling capability building block for these new platforms,” said Guyan. “In doing so, it takes much technical challenge, risk, and cost off the table for the vehicle programs because they can adopt the already proven solution and focus on platform-specific challenges. Of course, those challenges are more technical. But it permits the NGCV teams to work on integration, risk reduction, and delivery.

“MFoCS is not a program to be disruptive, but a program to embrace and double down upon as the lessons learned that can be applied to other programs. We’re leaning forward on this program and have already designed in expansion and added functionality to meet emerging requirements. MFoCs has been around for many years, but it has evolved and improved many times and remains highly relevant.”

One of the missions expected of the OMFV is an ability to control two or more robotic combat vehicles (RCVs), whose job it will be to scout ahead of a manned force, identify obstacles, detect chemical agents, put direct fire on an enemy, and then team with humans to determine the next best course of action. The Army is already using present day technology to demonstrate how it would control RCVs in a manned-unmanned teaming arrangement. That occurred this past August at Camp Grayling, MI, when Army Futures Command fielded an OMFV prototype fighting vehicle called the Mission Enabling Technologies Demonstrator (MET-D) that worked successfully with a pair of RCV surrogates.

Providing troops with situational awareness of RCV locations and operations could clearly be a future use for MFoCS II.

“At the end of the day, a remote-control vehicle on the battlefield is absolutely going to have to be a blue dot on the common operating picture so that friendly forces know where it is and can track it,” explained Guyan. “Additionally, the sensor data that is delivered by the remotely controlled vehicle, whether it’s related to an IED or an enemy force, has to make its way from the RCV back to a platform where it gets populated onto the Common Operating Environment so that information can be shared with other vehicles.

“Imagine plotting the route of an RCV on the mission command screen and sending it to the RCV almost like an order, giving it route direction and guidance. So, the display surface at the commander’s disposal and the vehicle computer that is connected to the network will eventually play a critical role in enabling the tactics, techniques, and procedures for RCV implementation.”

This is how contemporary technologies like MFoCS that can make themselves useful on future platforms. As an element of the Army’s Mounted Computing Environment, MFoCS will be part of what the Army installs on any platform, whether it’s a Bradley, Humvee, or the OMFV. What remains to be determined is whether that equipment is used solely as a mission command platform or whether the additional processing capabilities in the system are leveraged to do other things, like improving platform networking of sensors.

So in addition to being a single box running a single application, the additional processing power inherent in the system can create a platform network hub that integrates communications, sensors, platform vetronics, and mission command, decluttering all the varied systems that otherwise would be delivered kind of in a stovepipe way onto the platform, according to Guyan.

“That’s a capability of MFoCS II that’s being provided but is not being fully utilized,” he said. “While we are primarily a system providing a capability to Joint Battle Command – Platform, we’ve embedding a great deal of additional functionality into the system that enables the Army’s NGCV vision without the need for cost and risk of developing a new program. The system that we deliver is a computer, a server, and a router. It can do radio crossbanding. It can do video, data, and voice management. It can do radio controls, vehicle intercom, and sensor integration and distribution, as well as tying into the vehicle diagnostic system through a CAN bus interface.”

The Army is not taking advantage of all those capabilities today, but for a program like the OMFV it could provide a step function increase in capability without spending new money.