Basically, he got rid of the Joint Functional Component Commands for space, global strike, cyber, integrated missile defense, intelligence, surveillance and reconnaissance and whittled them down to one for space, one for air, one for maritime and one for missile defense. (Actually, Congress got rid of one component for him by making Cyber Command independent). They are also now called Joint Force Component Commands, so we’ve got the same acronym but a different name. That will drive people mad until Hyten, with his crystal clear mind, realizes they must be changed.

In addition to the JFCCs, Hyten abolished the six nuclear task forces that were responsible for airborne tankers, Atlantic and Pacific nuclear missile submarines, strategic communications, bombers and reconnaissance aircraft, and land-based ICBMs. Instead, they are grouped, logically, within the four commanders now responsible to him.

The biggest command change involves Gen. Jay Raymond, the head of Air Force Space Command. As Breaking D readers know, the position was elevated to a four-star billet and became the space JFCC. 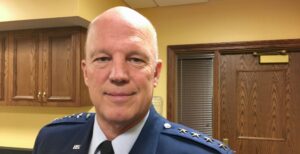 The current setup has the Joint Functional Component Commander, Lt. Gen. David Buck, reporting to the head of Strategic Command, Gen. Hyten. This is how STRATCOM serves as the combatant commander for space. Gen. Raymond sets the requirements for new space weapons, oversees Space and Missile Systems Command (which actually buys the satellites, sensors, launch and ground systems) and trains, equips and builds the space warfighting cadre. Once the changes are complete, which Hyten said probably won’t be until early next spring, Gen. Raymond will directly advise Hyten on space forces and keep doing the space command job.

Similarly, Gen. Robin Rand, commander of Air Force Global Strike Command at Barksdale Air Force Base, will now serve as JFCC to Hyten for all things relevant to the E-4B flying command posts, B-2 and future B-21 bombers, and KC-135, KC-10 and KC-46 tankers.

Adm. Phil Davidson of Fleet Forces Command will now be responsible for all nuclear subs.

Interestingly, missile defense remains a Joint Functional Component Command (not a Joint Force Component COmmand). I asked several people what this meant and didn’t get a really clear answer.

All this will be watched very closely by both our allies and our competitors because of the centrality of nuclear forces to both deterrence and assurance. 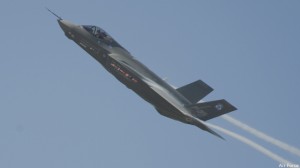 In related news, Hyten told me that the he met two weeks ago with the head of European Command, Gen. Curtis Scaparotti, and discussed whether F-35A Joint Strike Fighters needed to be upgraded to carry nuclear weapons with all possible speed. He said they did not come to a decision, but reading his body language and careful wording, I’m betting they concluded this was a necessary step to take in the face of Vladimir Putin’s continuing aggression across Russia’s border with central Europe. Any move to make the F-35A nuclear capable will require, he said, close consultation with our NATO allies.

The presumptive undersecretary of defense for policy, David Trachtenberg, endorsed making the F-35A nuclear capable ASAP in his testimony before the Senate Armed Services Committee.