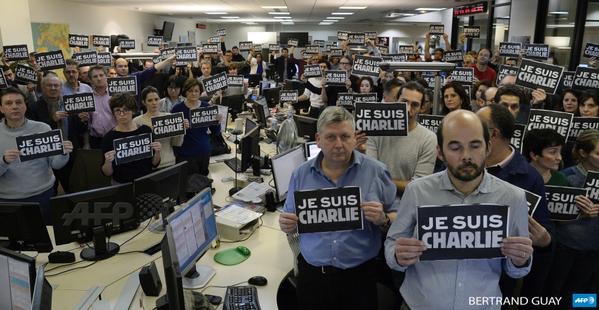 This opinion piece — something Sydney and I rarely engage in — is offered to remind ourselves and our readers that, as yesterday’s Paris murders demonstrate, the cost of liberty can be high. Some think the currency of life and struggle — jihad, if you will — is worth paying. The Editor.

If you want to be comfortable then don’t read this.

When I was a reporter in East Africa, I was hung up on a pole by my arms in the Khartoum sun for a long time (I had no watch and it was really hot) in front of a Khartoum police station near the presidential palace. Why? I was grabbed by riot police for the crime of covering demonstrations that toppled the government of Jaffer Nimeiri the next day.

When I was a reporter in East Africa, I was screamed at and beaten for more than an hour by Sudanese security while I was working with a Newsweek photographer who had just taken photos of government troops shooting demonstrators.

When I was a reporter in East Africa, I had to face down Kenyan Presidential Daniel arap Moi’s security boss — known fondly as Fat Pat — as I headed to a police station to get colleagues out of jail. Pat told me, standing there with a recently repaired dislocated shoulder in a sling, that I had better not go to the station if I valued my health. I got to the station and convinced the police to release my colleagues. They’d been beaten after being arrested for covering a demonstration. One reporter had a cracked vertebra in her neck. The others sported a lot of bruises and some cuts. Limping was the order of the day.

When I was a reporter in East Africa, the Kenyans arrested a Kenyan freelance reporter, Paul Amina. An AFP reporter and I found the police station where he’d been arrested. I tracked Paul back to a wonderfully named security entity called the Special Unit. I bluffed my way into talk to the head of the unit. He was not sympathetic to my enquiries about Paul. I contacted Amnesty International, several press freedom groups and others I thought might be interested in the fate of a Kenyan journalist. Paul was tortured and then moved to a prison. The day I was kicked out of Kenya, Paul was released. I have a letter from him that I treasure.

These are the lower prices journalists sometimes pay for shining a light on our world. My French colleagues in Paris paid the highest price this week, shot down by cowardly thugs who had the gall to invoke God as they killed unarmed innocents.

Freedom of speech is sometimes bought with the price of a life. But the value of that freedom cannot be measured. Simple speech, printed words, humor and mockery can bring down governments, render the mighty powerless and lead to better lives for the downtrodden. I so admire Stephane Charbonnier, the editor of Charlie Hebdo. In a 2012 interview, he said: “I have no kids, no wife, no car, no mortgage. It sounds pompous, but I prefer to die standing than on my knees.” He did.

The sniveling cowards who killed him and his colleagues would do well to remember this. We will speak. We will write. We will paint, We will sing. We will sometimes pay the price. Our peoples and our countries will continue to shine as beacons of a light that draws mankind from all over the world. Huge crowds came out last night and flooded Europe’s great public spaces — Paris’ Place de la Republique, Trafalgar Square, Berlin’s Brandenburg Gate — declaring they were “Not Afraid” and they stand with the dead journalists.

Their killers will, if they are lucky, live a pointless existence in a civilized French prison. Their twisted ideas have already been repudiated by virtually every country and most Muslim leaders. They are alone and will die that way. Our light will keep shining.