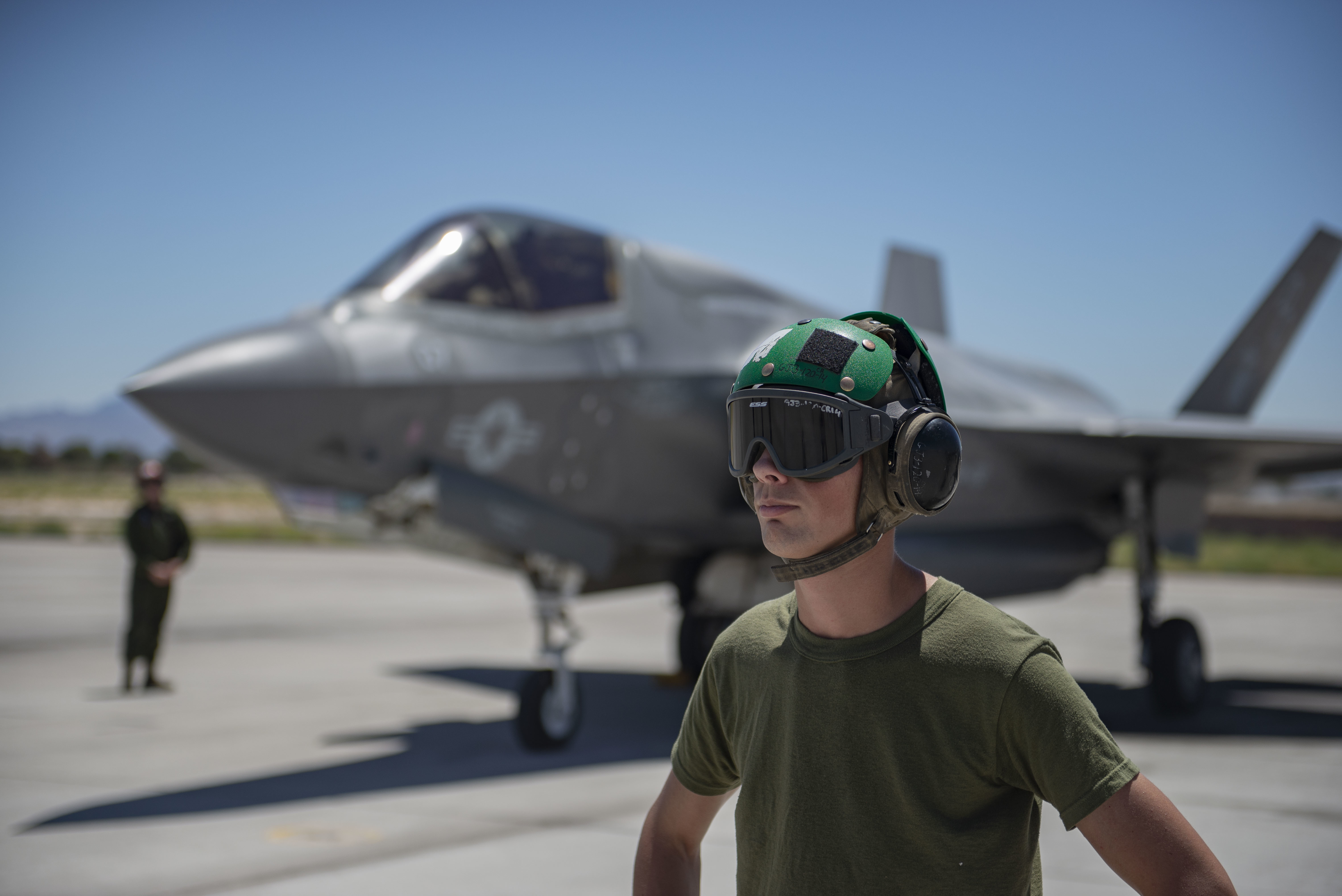 THE PENTAGON: The Marines are testing unmanned platforms to quickly refuel and rearm F-35Bs it plans to operate out of remote, austere bases in the Pacific — part of an effort to be more nimble, and unpredictable, as the traditional American dominance at sea and in the air erodes.

For years, the Corps has talked about flying its F-35Bs from hastily assembled bases on small islands and remote locations to avoid sophisticated surface-to-air missiles being developed by China and Russia. The basing effort would not only keep the stealthy planes tactically unpredictable, but also untether them from big deck ships that would be prime targets for hypersonic cruise missiles and other weapons in any future fight with an advanced enemy. This was a key driver behind the Marines deep commitment to the F-35B, which can do short takeoffs and vertical landings, as well as the rare vertical takeoff from a road or other flat surface.

One of the holdups to the plan has always been how to ensure the planes could get fuel, ammunition and parts out to these locations. “If I can’t sustain it, I’m hosed,” Maj. Gen. Mark Wise, deputy commander of Marine Corps Combat Development Command told a handful of reporters at the Pentagon on Thursday.

Getting more fuel and ammo for those planes, quickly, would allow the Marines to “turn up the battlefield tempo at a much faster rate,” he said, which is critical in an area swarming with manned and unmanned platforms looking for American planes sitting on the ground for too long.

That’s where the Advanced Naval Technology Exercise, (ANTX) comes in. The July event at Camp Lejeune brought together dozens of companies and academics to show off technologies focused on autonomy, command and control, communications, and unmanned systems and logistics for the Marines and the Navy. All told, there were 53 different systems that were put into the hands of sailors and Marines to evaluate.

The ANTX, one of several planned this year, laid out several unmanned options that can be developed and pushed out to the field in a relatively short period of time, Wise said, which would “enable the movement of that very heavy gear very quickly. I don’t have to commit somebody to it.”

The ANTX efforts aren’t for technologies already in the acquisition pipeline, but focus on gear the Navy and Marine Corps want to kick around to see what might be useful in the future.

“Anybody that brought equipment there got assessments from many of the folks who were there,” said James Geurts, the Navy’s research and acquisition chief. The makers can then take that feedback and circle back around to their new military contacts for another bite at the apple. But the big takeaway from the Navy and Marine Corps side was that they now have a better idea of everything they don’t know. “We got exposure to cutting-edge stuff that we may not have known we had a requirement for until we saw it,” Geurts added.

The goal, like so much else at the Pentagon these days, is speed, Geurts said he wants to make decisions on whether or not to begin developing — and buying — some of this new kit within 12 to 18 months “If there’s things that have demonstrated value in the field with some minimal amount of development that we can begin to turn those around and put contracts in place,” he said.

Geurts was excited about the new “combinations of autonomous systems” he saw at Lejeune. “What was remarkable to me was seeing autonomy in all those different operating environments starting to play together. And we can start to piece together operating concepts that may be closer to [being available to] us than we had originally conceived.”

He declined to get into specifics, but Wise said he’s interested in taking a harder look at “some of the seaborne platforms and the autonomous capability with weapon systems,” which he called “fairly impressive at what they could do.”

Much of what the officials described fits nicely within the framework outlined by new Marine Commandant Gen. David Berger in his recent Commandant’s Guidance. Berger called into question the usefulness of Marines continuing to get to the fight in large, slow and increasingly vulnerable ships operating without support from unmanned platforms that can warn them and help protect them from adversary movements.

“It would be illogical to continue to concentrate our forces on a few large ships,” he wrote. “The adversary will quickly recognize that striking while concentrated (aboard ship) is the preferred option. We need to change this calculus with a new fleet design of smaller, more lethal, and more risk-worthy platforms.”

Geurts and Wise said their exercise was in keeping with this new direction.

“What he’s doing is formalizing a lot of the things we’ve been working on,” Wise said, while laying out “how we are going to focus our efforts on where we’re going.”

Michael Stewart, the Navy’s deputy director of integrated warfare, added that the “new commandant’s guidance to me is just breathtaking in terms of how it talks about the naval — not Navy and Marine Corps — but naval forces, and the recognition that to solve the problems we’re up against, we have to be a naval force, and we have to be linked at the hip.”

The Lejune ANTX will be followed by another assessment later this month in Newport, R.I., that will bring in another batch of technology focused on undersea operations.