WASHINGTON: Bell is taking know-how from its trademark tiltorotors and applying it to air taxis and delivery drones, CEO Mitch Snyder said today. In turn, those civilian aircraft, he added, will prove out new technologies with major potential for the armed forces.

Bell’s extensive experience in actually building aircraft, particularly tiltrotors, gives it a real advantage over most — although not all — of the scores of companies that claim to be developing air taxis, said Mike Hirschberg, director of the independent Vertical Flight Society. And, Hirschberg told me after Snyder’s talk at the Center for Strategic & International Studies here, as the technology matures, “there are some really compelling things I think will eventually be useful for the military.”

Bell is already flying prototypes of its Autonomous Pod Transport, a drone designed to haul small cargoes short distances, cargoes which could be anything from pharmaceuticals to ammunition. It’s also developing Nexus, an air taxi intended to fly four people up to (roughly) 60 miles — and do so quietly enough, using either a hybrid or all-electric engine, for municipal authorities to allow it overhead. The armed forces would probably want an upgraded Nexus with greater “range and payload,” Snyder said, but “when you have an aircraft that’s extremely quiet…there’re going to be military applications for it as well.”

But neither the Nexus taxi nor the pod drone is going to be a tiltrotor, a type of aircraft that’s become synonymous will Bell. Working with Boeing, Bell builds the first and so far only operational, mass-produced tiltrotor, the V-22 Osprey. Now Bell is scaling down that technology in the smaller V-280 Valor, a top contender to replace the Army’s UH-60 Black Hawk, and the even smaller V-247 Vigilant, a proposed ship-launched scout drone for the Marines.

Even the unmanned V-247, though, is still larger than a Vietnam-era Huey. It seems, so far, that Bell can’t make tiltrotors any smaller. When the Army imposed a strict size limit on its Future Attack Reconnaissance Aircraft, for example, Bell ended up offering a conventional (albeit high-tech) helicopter, the Bell 525.

The limitation may be inherent to the technology. Tiltrotors combine the vertical take-off and landing of a helicopter with the faster and more fuel efficient long-distance flight of a fixed-wing airplane. But to do both, they need both a wing and a pair of massive rotors, which tilt (hence the name) to provide either vertical lift or forward thrust.

Tiltrotors are uniquely versatile, but are not compact. So how does Bell apply at least some of this technology to aircraft like air taxis and delivery drones, which must be small enough to fly down streets and land on rooftops? Well, while the Nexus and Autonomous Pod Transport aren’t tiltrotors, they do tilt.

Nexus, for example, uses ducted fans — small propellers in cylindrical sheathes — which are much more compact than a tiltrotor’s sprawling rotor blades. But those fans still swivel throughout flight: They push the aircraft upward for takeoff, then push forward for distance cruising.

But the transition from vertical to horizontal flight is tricky, even treacherous. An aircraft converting from vertical to horizontal flight has to rapidly and dramatically change both angle of flight and velocity — and if it fails to maintain sufficient vertical lift and horizontal thrust and stability, disaster can strike in an instant. The sophisticated flight controls to manage that transition are a common technology required across tiltrotors, air taxis, and delivery drones — and they’re also a strong suit of Bell’s.

“Bell’s niche has been … things that take off vertically and convert to forward flight,” Snyder said. “The key and critical secret sauce is the conversion in between.

“There’s a common thread there. The tiltrotor’s still foundational,” Snyder said. “If you think about the tiltrotor and especially if you talk about the V-280… that’s still kind of the centerpiece.” But if you boil down what a tiltrotor does to the essentials, he says, “it’s taking off vertically, and then it’s moving to forward flight,” just like the Nexus and the Autonomous Pod. 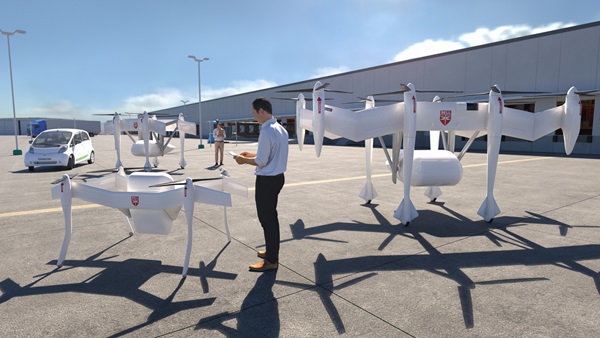 The crucial common piece is the sophisticated flight control technologies, Snyder said, which can apply equally well to tiltrotors, tailsitters, ducted fans. For that matter, that tech applies to conventional helicopters like the Bell 525, which is on schedule to become the first FAA-certified helicopter to fly with fully digital “fly by wire” controls. What’s more, as flight control software becomes ever more sophisticated, it becomes even more autonomous, even artificially intelligent, moving from a mere tool for human pilots to a partner or perhaps a replacement.

This highly technical, highly specialized expertise in flight controls, especially the transition from vertical flight to horizontal to back again, is a major strength for Bell, Hirschberg agreed. But it’s not entirely unique: At least three companies he knows of — Kitty Hawk, Volocopter, and Lilium — “built large aircraft and transitioned to forward flight” after a vertical take-off. Uber is also investing heavily.

But there are many more companies whose technical credentials are less impressive. The Vertical Flight Society has catalogued “about 200 different designs” for air taxis and even smaller aircraft, Hirschberg said, of which “maybe a dozen or two dozen concepts look like they would be compelling.”

With over a billion dollars already invested in electric VTOL companies, “it is a gold rush. It’s very similar to the dot com boom,” Hirschberg told me. “People who don’t have the experience of certifying aircraft and bringing them to market believe they’ve solved all the problems….but just getting something to fly isn’t nearly enough.”