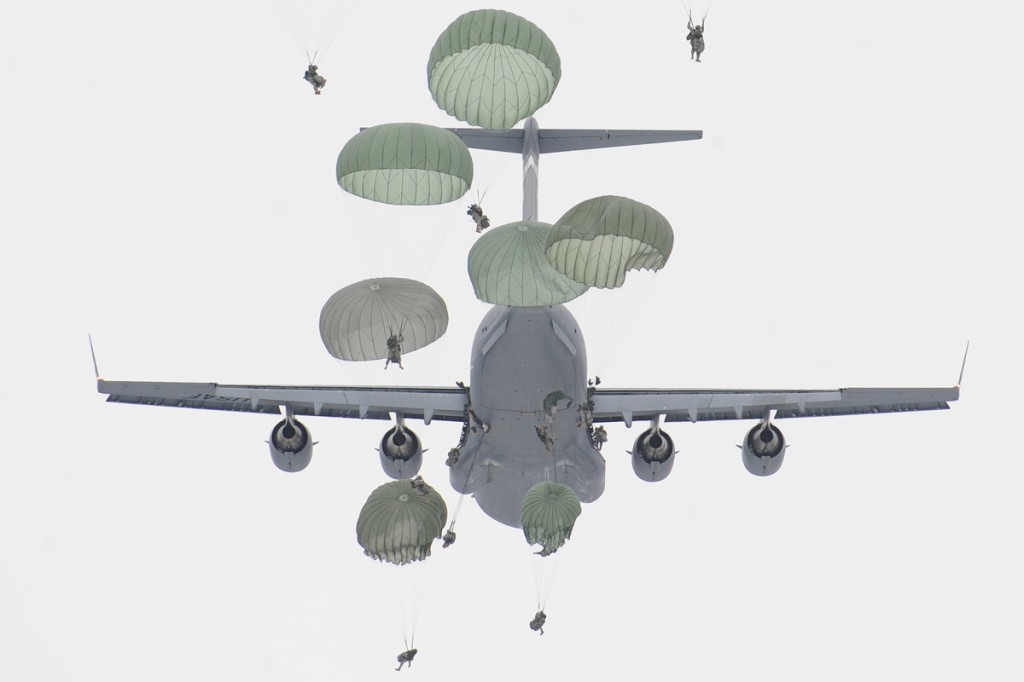 PORTSMOUTH, VA: This is a Navy town, just minutes from the massive Atlantic Fleet base at Norfolk. But when Navy and Marine Corps leaders convened here yesterday for their annual conference on expeditionary warfare, traditionally a Navy-Marine affair, they reached out to the other services in unprecedented ways. Message No. 1: After 12 years of inland warfare in Afghanistan and Iraq, all the armed services, not just the Navy and Marines, need to refocus on rapid response to crises around the world. Message No. 2: No single service, nor even the tight-knit Navy-Marine Corps team, can handle the expeditionary warfare challenge on its own.

So yesterday, on the first day of the National Defense Industrial Association‘s 18th Annual Expeditionary Warfare Conference, the Navy and Marine Corps speakers were actually outnumbered by the other services: There were two Navy admirals and one Marine general, but two Army generals, a one-star from the Air Force, and a three-star admiral from the US Coast Guard spoke as well. (The Coasties, except in time of war, are not even part of the Department of Defense.) That line-up was more joint than it has been in years, and that was not an accident. At a time when tightening budgets are pushing the services to compete, NDIA very consciously chose to emphasize cooperation and outright interdependence.

When the Army’s 82nd Airborne Division says it can get paratroopers on the ground in 24 hours anywhere in the world, for example, obviously they’re counting on the Air Force to get them there, just as the Marines depend on Navy ships.  “This is an inherently joint business for us,” said the 82nd’s commander, Maj. Gen. John Nicholson. “Our expeditionary capability has to be a joint capability or frankly it is an exhibition,” not an expedition. Pointing to a slide of the Airborne’s major training events, he noted, “every exercise you see here is a joint exercise.”

But interservice interdependence goes far beyond that. It’s long-range Air Force bombers that can show up first to any fight at any range from the United States. It’s the Air Force  — using land-based aircraft — and the Navy — using both aircraft launched from carriers and missiles launched from destroyers and submarines — that crack open anti-ship and anti-aircraft defenses so the paratroops’ transports and the Marines’ amphibious assault ships can get through. (This is particularly important against China‘s and Iran‘s increasingly sophisticated layered defenses, known as anti-access/area denial (A2/AD) systems). In the major Airborne-Air Force exercises, Nicholson said, the Air Force practices breaking through air defenses, not just dumping soldiers out of planes.

The first force on the ground may be Airborne paratroopers: That’s “a capability that we don’t have,” Lt. Gen. Kenneth Glueck, the Marine’s deputy Commandant  in charge of developing new capabilities, replied when I buttonholed him after his formal remarks. But the 82nd Airborne is lightly armed, and their first wave of much-needed reinforcements is just as likely to be Marines flying V-22 Ospreys from Navy ships as it is to be Army Stryker vehicles delivered by the Air Force.

But if the Marines plan to stand ashore for more than 60 days, they probably need support from the Army’s massive logistical machine. And if the Air Force wants to use thousands of short-ranged fighters it will need airbases nearby — which may have to be captured, defended, or even built by Army and Marine troops on the ground. (Anyone remember Guadalcanal?)

“It’s good to have my Marine Corps friends,” Air Force Brig. Gen. Tommy Williams told the approving audience yesterday. “There are some platforms that fly a long-range mission” — B-2 bombers, in fact, conduct all their strikes worldwide from a single airbase in Missouri — but that’s just a fraction of the force, and refueling short-ranged aircraft in mid-air is a difficult and resource-intensive operation. “At some point,” Williams said, “the fact is forward basing is something that we in the Air Force, at some level, have to have.”

Of all the services represented, however, it was the Army and Marine Corps that emphasized most emphatically that they were complementary to one another, not competitive. After generations of institutional rivalry, when the Army has sometimes tried to absorb the Marine Corps altogether, the two services fought shoulder-to-shoulder in Afghanistan and Iraq, and as both seek to reemphasize expeditionary deployments, neither wants to go back to those bad old days.

“We are in the contingency response business again,” said Army Maj. Gen. William Hix, deputy director for future concepts at the Army’s powerful Training And Doctrine Command, TRADOC. But that doesn’t mean the Army is trying to replicate the Marine Corps.

“I’ve been to sea with the Marines,” Hix told the group. “I’ve done small boat infiltrations with [Marine] Force Recon. I’ve been out with the SEALS. I commanded a Marine battalion in my formation in southern Afghanistan. So I’m very familiar with the unique qualities and capabilities of Marine and Army forces, and what we do is complimentary, not in competition.

“We offer some unique capabilities,” Hix told me after his remarks, “some that reinforce and some that complement the Marine Corps, and vice versa.”

“Like he talked about, we are complementary,” Glueck told me.  “It’s about having a lot of different tools in the tool chest.”

“We’re also going to be working much closer with the SOF [Special Operations Forces] community,” Glueck had told the group just minutes before. (All services contribute troops to SOF, but the largest component comes from the Army). “We’re putting SOF liaison personnel back on the MEUs [Marine Expeditionary Units]. We’re completely complementary to one another. The MEU that’s out there is kind of like a universal tool….. There’s a lot of tools on that universal tool, but we don’t have a stiletto, and I kind of look at SOF forces as a stiletto.”

So in that analogy, I asked Glueck afterwards, what’s the Army — a truck full of sledgehammers?

They’re a lot more flexible than that, Glueck replied: “A lot of the utility knife capabilities that we talked about [in the MEU], many Army units have those too, particularly light agile units” — e.g. the Airborne. “Sometimes you need a screwdriver and sometimes you need a hammer. It depends on the mission.”

In fact, the Army is reemphasizing expeditionary forces at the same time it’s beefing up its heavy armor. “There’s a quality you don’t want to give up,” Hix told the group. “The Army’s the mailed fist of the joint force….when you need somebody to come in there and grind somebody into the ground.”

In a major conflict, “we have to get an operationally significant force there,” Hix said. “A MEU is a tactically significant force, it provides a lot of value in a host of areas for the combatant commanders and can respond to small problems” — a non-combatant evacuation of US citizens from a country in crisis, for example — “but it’s not going to solve the big problem. So you’ve got to have a balance of both.”

Hix also pointedly reminded the Marines that they depend on the Army for long-term logistics, from fuel to ammunition to food. “I was in Helmand when you guys rolled in, OK, and I saw how much Army showed up to support the 9,000 Marines,” he said.

“The sea base, at some point, is not going to be able to sustain us ashore,” Glueck acknowledged. On the other hand, he told me, if the 82nd Airborne parachutes in somewhere, it may well be Marines that come in to support them with supplies and firepower — instead of the paratroopers hanging out alone for months and praying, like the infamous “speed bump” force facing down Saddam Hussein’s tank divisions in 1990.

“Where the 82nd goes in early or first, ” Hix agreed, “if it’s a short notice thing and the maritime component is within reach of the objective area they could easily come in and reinforce [the paratroopers]. Then follow on could be Marine corps or Army or both.”

“Half the solution is just thinking about the problem differently,” Hix said. In fact, Hix’s staff at TRADOC and Nicholson’s at the 82nd Airborne have collaborated on crisis scenarios that incorporate the Marines. “We have done the analysis, modeling, etc.,” he told me. “We can close a two-brigade-plus force in about 17 days….That’s airborne forces, some Marines leveraging a MEU in the region, and also closing a Stryker brigade in to add some additional mobility, agility, and firepower protection.”

The eight-wheel drive Strykers served as rapid response forces in Afghanistan and Iraq, moving swiftly from sector to sector, but then-Chief of Staff Gen. Eric Shinseki’s original concept was that they would be light enough to airlift rapidly anywhere in the world, an idea to which the Army’s now returning. The 82nd already trains with Strykers, as well as heavy tracked vehicles, and has an “immediate ready company” of each on call. But the Army now wants to do much more with rapidly deploying Strykers.

The service is also considering the purchase of an air-droppable but well-armed vehicle for the 82nd Airborne itself, which lost its parachutable light tanks, the Vietnam-era Sheridans, back in the 1990s and never replaced them. (Strykers need to be landed at an airfield somewhere). Assuming the Army can actually afford a new vehicle, it would probably be bought in small numbers and off the shelf. “Many of these exist,” Nicholson said. “A lot of our allies have these capabilities.”

In the longer run, however, the Army knows it needs to become lighter to become fully expeditionary and close the gap between the fast but fragile 82nd and the slow but powerful armored forces. That’s something the service has struggled with since the 1990s.

“Frankly the hard part isn’t getting the force there, the unit, it’s getting the logistics tail there,” Hix told the group. When you are driving 80-ton armored vehicles, fuel consumption is a major hurdle, but it’s a hard one to lower, Hix said. “I’ve looked at power and energy, I know the department’s pushing this hard, but the key thing is getting the material science part of this”: In other words, making the vehicles lighter so they are not only easier to deploy but burn a lot less fuel.

But until that breakthrough comes — if it ever comes — the Army and all the other services are going to have to deploy abroad with what they’ve got. The crucial lesson is  that none of them can do the job alone.