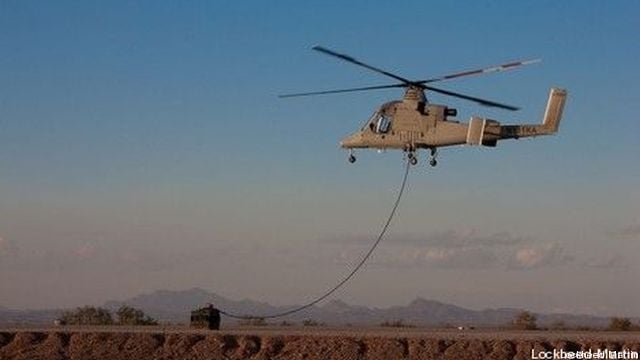 The Marine Corps is taking the use of unmanned air systems to the next level, deploying pilotless cargo helicopters to Afghanistan to test their ability to supply troops in the field without trucks facing the risk of deadly IEDs.

The six-month demonstration of the feasibility of a cargo UAS in a combat environment will involve two K-MAX helicopters, a commercially-proven manned aircraft produced by Kaman that was modified for drone operations by Lockheed Martin. The decision was announced today by Rear Adm. William Shannon, program executive officer for Unmanned Aviation and Strike Weapons at Naval Air Systems Command, which buys aircraft for both of the naval services. “I am very excited to deploy a system that will keep our Marines and sailors out of harm’s way and ultimately save lives,” Shannon said in a NAVAIR release.

The K-MAX system was chosen after successfully completing a quick reaction assessment at Yuma, Ariz., in August. Operating in high temperatures and dusty conditions similar to what it will face in Afghanistan’s Helmand Province, the twin-rotor K-MAX carried a total of 33,400 pounds of cargo, with nearly 3,500 pounds on one mission, exceeding the requirement to haul 6,000 pounds per day over five-days.

The K- MAX is a slim, stubby single-piloted helicopter that has been used commercially for years, often in lumbering operations in mountainous terrain. The K-MAX carries its cargo by slings and can deliver three loads to different locations in one trip, either autonomously or by remote guidance. During the deployment, two aircraft and the ground control station will be operated by a detachment from Marine Unmanned Aerial Vehicle Squadron One, supported by Lockheed technicians.

Boeing competed for the cargo UAS trial with its A-160 drone, but has not been able to conduct an assessment. “The team is still working with Boeing on a possible QRA for the A-160,” but it will not go to Afghanistan, NAVAIR spokeswoman Jamie Cosgrove said. “We are only planning on deploying one system. But we might have other uses for the Hummingbird,” Cosgrove said in a phone interview.