PENTAGON: For the first time, the Air Force has run a wargame trying to decide how best to build the structure for Multi-Domain Command & Control. A central objective is figuring out how to manage data flows coming from all over the world from every domain: air, land, sea, space, and cyberspace.

What could the catchphrase for MDC2 was coined during the war-game: “Conflict Anywhere Will Be Conflict Everywhere”

Three different teams built three different structures to see which would be optimal. The final results weren’t in when I interviewed Brig. Gen. Salty Saltzman in his Pentagon office, but he outlined the basic conclusions he’s drawn.

Some 78 people, most of them grouped in four “squadrons,” did their best to hammer out how to build a group of people and how they work with commanders here and abroad to best manage a hugely complex battle ranging across the globe in which the enemy was jamming and spoofing and, of course, shooting.

The first group, the Kick’n Mules were “a bunch of colonels, really old and crusty and who come with a lot of baggage,” Salty told me Monday. They were there to weigh the strengths and weakness of current C2 structures. For example, “are they slow because you have to go SecDef for everything?” How well do the current operational commands function when faced with this enormous data flow from so many disparate locations?

The cool kids were, of course, the Ender squadron, comprised of captains: “No baggage, no real C2 experience. Sky’s the limit.” (If you haven’t read or watched Ender’s Game then you’ve got no idea of the broad conceptual framework within which many of those creating this new venture are operating.)

The Thunderbirds, of course, were a mix of colonel, majors and captains to ensure a balanced view.

The Tigers were the White Team, the folks who built the scenario designed to test the concepts.

What did Saltzman and his team learn? There were three very important early conclusions.

The most important and intriguing need is for something Salty and his team are calling a Global Integrator. “The idea is that no one commander is going to be given all the forces necessary because it’s going to be too global, too many domains, too many regions,” Salty said. This concept is in the early stages, but the wargame clearly demonstrated that there needs to be someone between combatant commanders and the C2 team to help interpret what’s happening and make recommendations depending on where the threat is and which domain it resides in.

The second conclusion they reached is that MDC2 is warfighting, not staff work. Salty and his team came to this general conclusion some time ago, which is why they created the idea of a new specialty, known as 13 OSCARs.

These would be people who spent most of their careers doing command and control, instead of the current method of staffing Air Operation Centers (AOC) “is simply a collection of SMEs (subject matter experts).” notes a briefing slide Saltzman gave me. If the Air Force and Joint Staff want to increase lethality, they need to “abandon” that model. 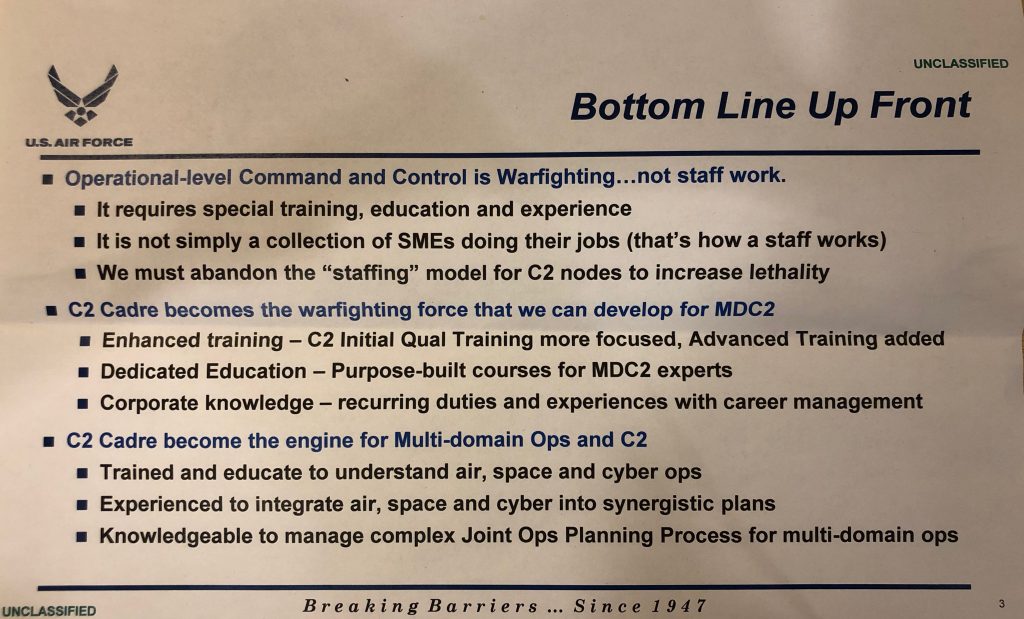 The third issue is subtle, but potentially powerful. In Salty shorthand, it’s: risk to mission vs. risk to force. This will be especially important as Artificial Intelligence becomes more and more prominent in managing data and making recommendations. Fundamentally, risk to mission means, can you get the job done? Risk to force weighs how many people will be killed or injured.

The group looked at some technologies but that was not a central part of the game, Saltzman said. Also represented at the game were military representatives from the Five Eyes intelligence-sharing pact: Australia, Canada, New Zealand, the United Kingdom, as well as the US.

Saltzman will be presenting his findings from the Doolittle Wargame at a C2 Summit with four stars on Jan. 15. Planning for the next one begins in February.

Here are Saltzman’s ideas on one whiteboard: 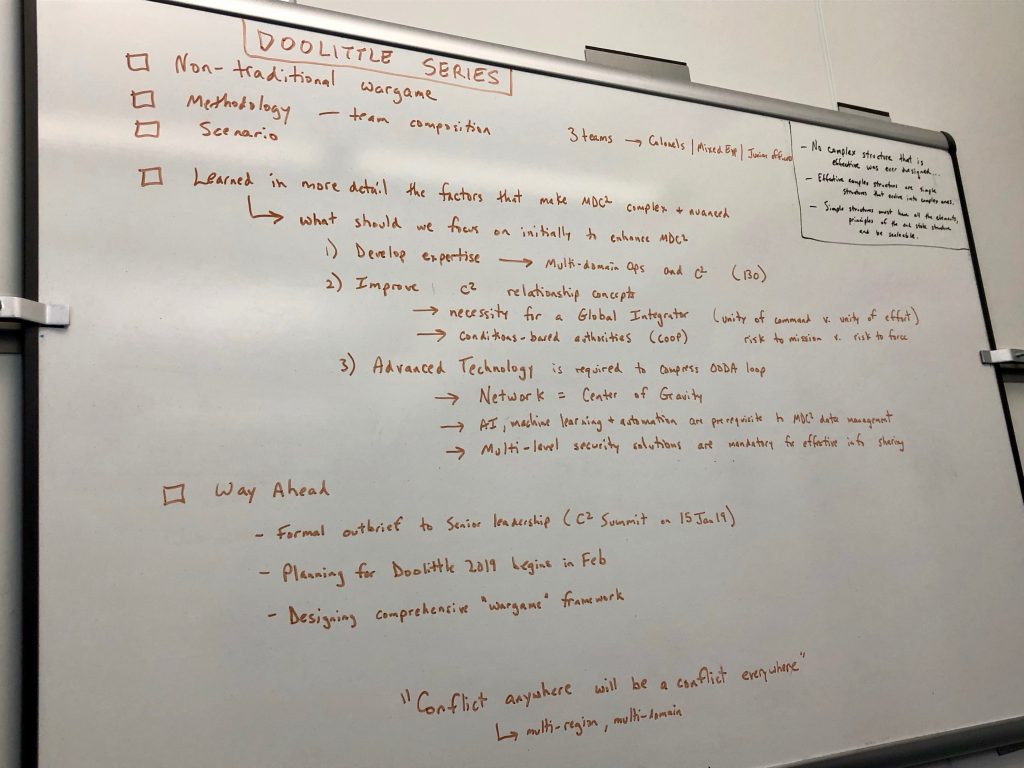