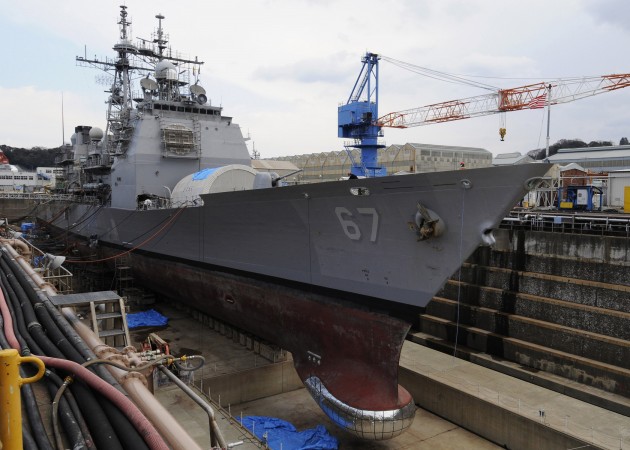 USS Shiloh, a Navy Aegis cruiser, in drydock for a maintenance “availability.”

WASHINGTON: More money for maintenance would allow Navy ships to stay in service longer, the head of Naval Sea Systems Command said today, and accelerate the fleet’s growth to the Trump Administration’s avowed goal of 355 ships by “10 to 15 years with a relatively small investment.”

The Navy’s current long-term plan assumes most warships will wear out after 30 to 35 years. Since each old ship retired cancels out one new ship built, and shipyards can only build new ships so fast, the fleet doesn’t grow to 355 ships until about 2045. But you can get to 355 ships by 2030 instead, Vice Adm. Thomas Moore said today, if you just make your existing ships last longer. 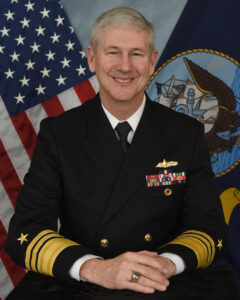 “I’ve told the CNO you could easily get five years out of everything that’s got a steel hull, and that you can probably get more,” Moore told reporters after his talk at the Center for Strategic & International Studies. “If it’s a ship and it’s floating today, we’re taking a look at what it would take to extend the service life.”

In effect, Moore is erasing the traditional tradeoff that says maintenance money contributes to the readiness of today’s fleet but shipbuilding buys the fleet of tomorrow. That tradeoff is acutely evident in the 2018 budget, which cut shipbuilding funds — disappointing all those who’d counted on Donald Trump’s campaign promise of a larger fleet — while adding $9.7 billion to operations and maintenance. If Moore’s math works out, however, maintenance money is not just about readiness here and now: It can also help bolster the fleet over the long term.

What will it take? Two things, neither simple but neither exorbitantly expensive, either. The first step is a detailed study of every ship in the fleet, each of which has its own unique history of wear, repair, and mishaps, to figure out how many years you could get out of each for how much money. Second, Moore said, to implement the study’s recommendations, you’d need new investment in both Navy yards and private-sector shipyards, upgrading facilities and training a historic influx of new workers.

Moore made clear this plan is not a panacea. Three types of vessel may be maxed out as is: 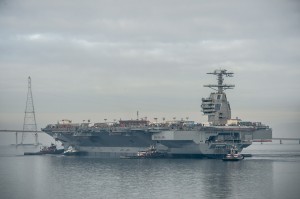 Another complication is that both the all-aluminum Independence and the steel-hulled Freedom-class LCS were designed to last only 25 years, rather than the 35 of a larger vessel. In the future, Moore said emphatically, “we should not design a ship with a planned service life of 25 years. It doesn’t make sense.”

Even setting aside subs and carriers, however, still leaves you with the vast majority of the Navy, Moore said: “CGs (cruisers), DDGs (destroyers), all your amphibious class ships, LCS (at least the steel ones — ed.), and actually some of the… Combat Logistics Force ships as well,” he said. 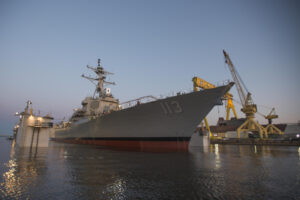 It’s worth noting that Congress and the Navy have wrangled repeatedly over retiring aging guided-missile cruisers (CGs). Now Moore is saying the 22 Ticonderoga-class ships could gain at least an additional five years of life, which will please the Hill.

Then there’s the Arleigh Burke-class guided missile destroyers (DDGs), the most numerous single class in the fleet: 62 ships in service, seven more under construction, and more purchases planned. The Navy had already planned to keep some late-model Burkes for 40 years, but the rest of the class would retire at 35. Why Moore didn’t give exact numbers, he’s talking about extending the entire class to at least the 40-year mark, a 14 percent increase in service life. In terms of long-term fleet size, that’s the equivalent of buying seven or eight new ships.

So what’s the trade-off, on the margin, between investing $1 in maintaining old ships and investing it in building new ships? Moore and his staff didn’t provide sufficiently detailed data to do that math. That’s what the Navy will have to study in the coming months, hopefully in time to inform their budget request for 2019. Watch this space.