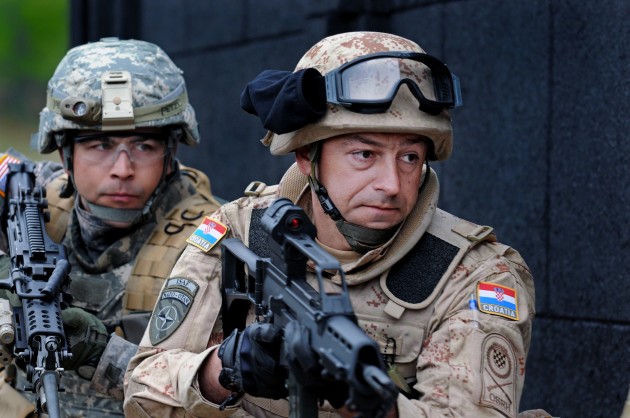 A Croatian soldier and a Minnesota National Guardsman train together for Afghanistan in Hohenfels, Germany.

WASHINGTON: At a recent wargame in Germany, slow communications between the US and an allied unit meant we would have killed our own allies.

We saw “what happens when we don’t get it right”  the Army Vice-Chief of Staff said last week. When an allied unit called for artillery support, Gen. Daniel Allyn said that “by the time that call made it through the system, [it] took 30 minutes, because we did not have interoperability right.” When the artillery finally opened fire on the enemy position, he went on, the allied troops had already assaulted it — which meant the barrage came down on them. “We had a fratricide scenario,” said Allyn.

“So am I satisfied with where we are on interoperability?” Allyn said. “I am not, and I will tell you our allies and partners aren’t either.”

Russia’s potent electronic warfare capability to “jam or disrupt or intercept” communications makes it especially critical that those networks be secure and resilient, Lt. Gen. Ben Hodges told reporters yesterday.”If there is a crisis anywhere in Europe,” the commander of US Army Europe said, “American soldiers will be fighting alongside allies. We’ll be mixed together” — with small US units under allied command and vice versa — “so you’ve got to be able speak securely on FM [radio], you’ve got to have digital communications that are interoperable.”

This is not a new problem for the allies. In the 2011 air war over Libya, French pilots gave up on getting targeting data from American Predators, because the American systems took too long to clear that intelligence for its release to the allies and to get it to them. In Afghanistan, the US and NATO eventually built a compatible system — the Afghanistan Mission Network — that all the nations participating could use. But that took years.

Both US Army Europe and US Army Pacific have pushed hard to get interoperability. But it’s the European front that is most active. As part of the Operation Atlantic Resolve effort to reassure allies and partners in the face of Russian aggression, a single US unit, the 173rd Airborne Brigade, has conducted operations in 22 countries with 30 different partner nations.

“It’s happening everywhere, but to me the bright spots are the work that’s being done in Hohenfels,” said Brig. Gen. Willard Burleson, who heads the Army’s Mission Command Center of Excellence. “They may have 16 countries in there for a training rotation [at the same time],” Burleson told me and my colleague Joe Gould. “They do it day in and day out, [and] they’ve been able to take that intellectual heavy lifting and then proliferate it” across Europe.

The long-term solution is supposed to be something called the Mission Partner Environment. MPE, in turn, will build on JIE, the Joint Information Environment. JIE is the US military’s internal effort to connect, rationalize, and protect its many disparate networks, and MPE will play a vital role in bringing that network to the battlefield.

MPE will get its workout in this year’s Network Integration Evaluation/Army Warfighting Assessment exercises, Bowman said, with 14 non-US partners involved.

The interim fix is BICES, the Battlefield Information Collection and Exploitation Systems. BICES is currently used by European Command, Africa Command (most of whose forces are based in Europe), and Central Command. (CENTCOM specifically uses it to help coordinate the Operation Inherent Resolve airstrikes in Syria and Iraq). Originally invented for NATO intelligence sharing, BICES now incorporates seven nations outside the alliance as well. For prospective partners who can’t afford BICES-compatible hardware, the US runs a “loan-lease” program that provides the necessary equipment.

But interoperable equipment is just part of the solution, Brig. Gen. Burleson emphasized. The human beings involved have to think in compatible ways as well. That includes both detailed procedures like calling for artillery fire and fundamental concepts of operation.

“It’s more than material,” Burleson said. “There’re cognitive, procedural, and then technical aspects. We’ve got to all be on the same cognitive framework, we’ve got to have procedures on how to do things, and then there’s a technical solution.”

Above all, responding to unexpected crises around the world requires greater flexibility than Afghanistan or Iraq, let alone the Cold War. It requires a network that can connect NATO and non-NATO nations, Lt. Gen. Bowman said, in “a coalition that ebbs and flows, grows and shrinks, adding partners as we need to.” Instead of a lengthy set-up process like that required of partners in Afghanistan, he added, “we need them to be able to show up with their own kit and plug in.”

“It’ll require a cultural shift across all of the Department of Defense,” Bowman said.