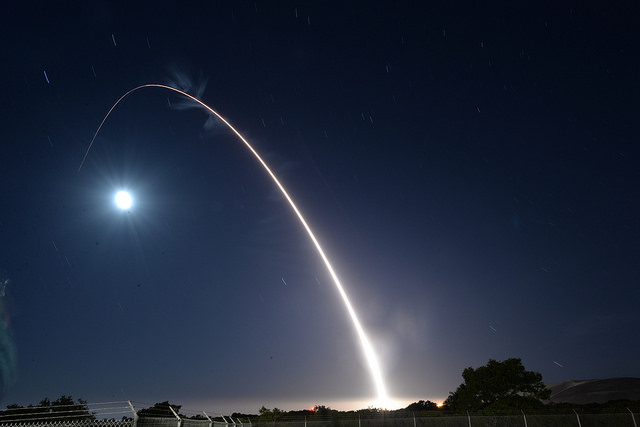 CAPITOL HILL: The Missile Defense Agency is still basking in the glow of last month’s successful shoot-down of an ICBM target but it will not get complacent in the face of North Korea‘s steady rounds of provocative missile tests, MDA Director Vice Adm. James Syring assured the House Armed Services Subcommittee on Strategic Forces yesterday.

“I would not say that we are comfortably ahead of the threat,” Syring said, after subcommittee Chairman Rep. Mike Rogers pointed out that since Kim Jong-un came to power in 2012, North Korea has launched 78 missile tests, 61 of which have been declared successful.

Efforts to defend the homeland from a North Korean nuclear-tipped ICBM continue to be pursued aggressively, Syring insisted. Just in the past six months, the secretive regime has reached new technological breakthroughs that “have caused us great concern,” he added. “They’ve been testing at an alarming rate, in violation of international law, and demonstrating technology that feeds development of longer-range missiles.”

Syring and three other defense officials laid out their case for MDA’s $7.8 billion budget request for fiscal year 2018. The budget has been criticized by defense hawks for coming up short of the $8.2 billion Congress appropriated last year. This will be Syring’s last budget season, as he is expected to retire soon, after nearly five years at the helm of MDA. Rogers praised him for nursing the agency back to health after a dark period when morale had plummeted.

Subcommittee members asked Syring to comment on the criticism that the Government Accountability Office has lobbed at MDA for lack of transparency on program costs and schedules. Syring prefaced that he has had a “good relationship” with the GAO but pushed back on the idea that MDA is keeping information from auditors. “We are under a tremendous amount of oversight,” he said.

Moving forward, Syring called on MDA to stay focused on the performance of the ground-based midcourse defense system. The victory scored in May should not make anyone overconfident. “In no way should the committee assume that this is the final step.”

The GBMD has shown erratic performance over the years, after it was rushed to deployment in the early 2000s. The reliability of the interceptor “kill vehicle” and other components has improved, “but we are not there yet,” Syring said. The GBMD is the biggest item in MDA’s budget, at $828 million. There are 32 interceptor missiles deployed at Fort Greely, Alaska, and four at Vandenburg Air Force Base, Calif. Eight more are coming to Alaska by the end of this year.