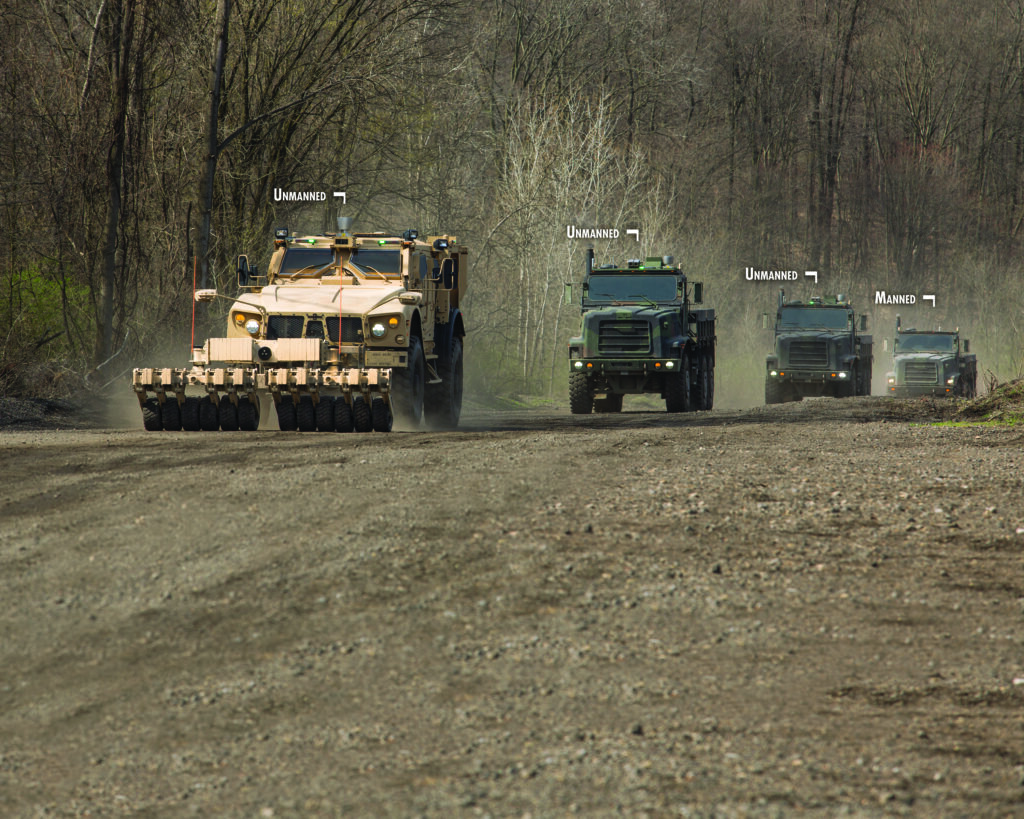 An unmanned TerraMax mine-clearing vehicle, followed by a mixed of manned and unmanned cargo trucks.

The future of military robotics may not look much like a robot. It may just be a truck that drives itself. That’s the simple, pragmatic approach pursued by Oshkosh — a company better known for trucks than Terminators — with its TerraMax Unmanned Ground Vehicle. But after eight years of experiments for three different military agencies, TerraMax can only get somewhere in the real world by proving its technology can adapt to many missions and many types of vehicles.

Now the company has made a major step towards that goal. After years of experimenting exclusively with cargo vehicles, it’s installed TerraMax on the M-ATV armored truck and equipped it to clear mines. With roadside bombs (known in the military as IEDs) certain to remain a major threat in future conflicts, and the M-ATV to remain in service long after the withdrawal from Afghanistan, that’s a much more compelling combination of platform and mission. What’s more, Oshkosh is moving to a more open architecture for the TerraMax software to make it easier to adapt to different platforms in the future.

“You really do design these kits so they’re relatively easy to install on any vehicle, especially modern vehicles where you have a digital connection” to the engine and controls, said John Beck, who runs the TerraMax program. In this case, he told me, they’re “applying the TerraMax UGV kit to an M-ATV with a mine roller on the front [for] the route-clearance mission.” (Oshkohsh’s M-ATV is the lighter, nimbler, Afghanistan-optimized “all terrain vehicle” cousin of the lumbering MRAP machines — “Mine-Resistant, Ambush-Protected” — first made famous in Iraq). In the future, Oshkosh wants to add ground-penetrating radar to help detect buried IEDs.

Oshkosh built the robotic M-ATV on its own dime. But the company was also recently awarded a contract from the Office of Naval Research to test TerraMax for the counter-IED mission. (Oshkosh wouldn’t specify the dollar value). The difference is the ONR is asking Oshkosh to put the technology on the standard Marine Corps cargo truck, the  MTVR: Oshkosh has already tested MTVRs with TerraMax, so the only new aspect to this contract would be the mission-specific equipment for mine-clearing, not the vehicle itself.

In fact, Oshkosh builds the MTVR itself and first installed TerraMax on one in 2004, when the self-driving truck competed DARPA’s 2004 robotics “grand challenge.”  Subsequently the Marine Corps Warfighting Laboratory picked up the project and experimented with using TerraMax MTVRs for unmanned supply convoys. Oshkosh has also done more limited tests installing TerraMax on two Army cargo trucks, the FMTV and PLS. But the Humvee-like M-ATV is a different class of vehicle and route-clearance a very different mission.

Migrating TerraMax from the six-wheel-drive MTVR to the four-wheel drive M-ATV was the easy part, Beck told me. “It’s fairly trivial,” he said. How does that work? Well, TerraMax has two major components:

The “drive-by-wire” system substitutes for a human driver’s hands and feet, electronically controlling the vehicle’s steering, throttle, and brakes. That part fits with modest modifications into any modern vehicle. (An old car with no computer chips in it is a different and more difficult matter).

Then there’s the “upper-level autonomy,” which substitutes for a human’s eyes and brain, telling the drive-by-wire system when to turn, accelerate, or brake based on sensor data, the navigation system, and collision-avoidance software. Co-developed with Carnegie Mellon University, this part just needs to know what kind of vehicle it’s driving. “You model the vehicle’s dynamics, parameterize that into the system, and you’re ready to go,” Beck told me.

Originally, the two parts of TerraMax were tightly linked, but now Oshkosh is moving towards an open-standard approach. That would let them upgrade or replace one without changing the other, making the technology markedly more adaptable.

Adapting TerraMax to the M-ATV is a big deal for Oshkosh, which is working hard to tout new variants of the vehicle on the international market now that America’s post-9/11 build-up is over. For everyone else, though, the bigger deal is getting a robot truck to help with the route clearance mission, and that’s the harder part of the problem that Oshkosh is still working on. 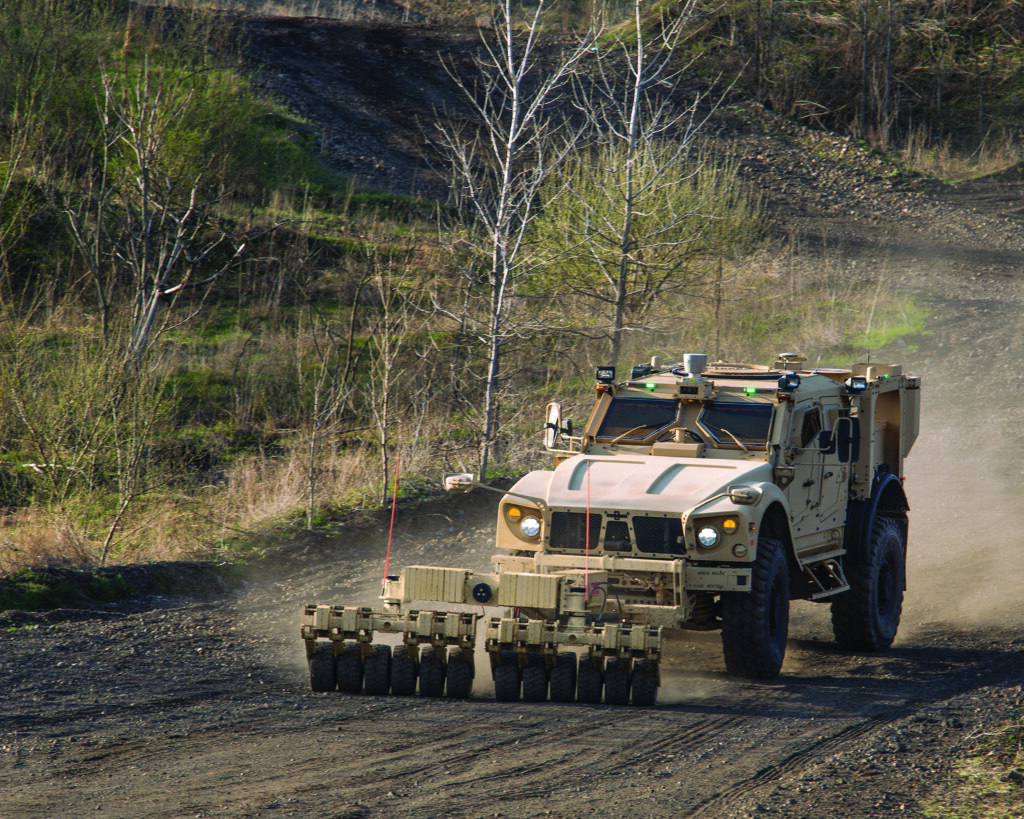 The unmanned TerraMax M-ATV with its mine roller.

On the most basic level, bolting on the mine roller — which has to be heavy enough to survive setting off a mine — affects how the vehicle handles. “This big thing hanging off the front… changes the way that the vehicle needs to maneuver through its environment,” Beck said.

Clearing a road or track also requires TerraMax to interact in new ways with both the physical environment and other vehicles. The cargo version can already play follow-the-leader as part of a manned convoy and avoid collisions. In one unplanned test of the system, for example, a young Marine stupidly stepped in front of a speeding TerraMax truck, but the robot slammed the brakes in time. A counter-IED vehicle, however, needs to keep formation as part of a team of vehicles of different types, recognize when its sensors have detected a threat, and, when necessary, hit the brakes and inform the humans. Not even Beck has ambitions yet to install some kind of robot arm on the TerraMax vehicle so it can try to defuse a bomb itself — at least, not yet.