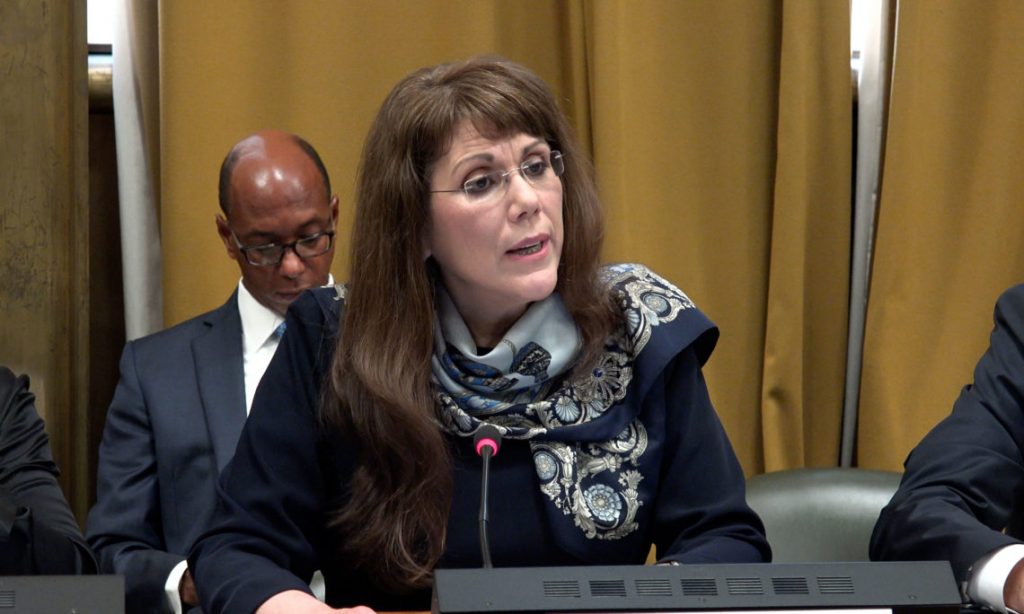 CORRECTED STATUS OF AMBASSADOR TO THE CD, GENEVA.

The State Department has been plagued by a paucity of staff, especially at the senior level, ever since the beginning of the Trump Administration. About 38 percent of key staff positions remaining unfilled, according to the Partnership for Public Service that has been monitoring administration nominations and appointments.

CORRECTED Vacancies include the ambassador to the United Nations since Nikki Haley’s resignation last October. The list goes on — assistant secretary slots for European and Eurasian Affairs, for East Asian and Pacific Affairs, and for South Asian Affairs.

Meanwhile, President Donald Trump recently ordered Secretary of State Mike Pompeo to put his staff to work figuring out how to push Russia and China into a new, tripartite nuclear weapons pact. That alone is a massive lift for the State Department, given China’s long-standing refusal to enter into arms control agreements and Russia’s annoyance over US reluctance to simply renew the current bilateral New START agreement that caps both sides arsenals.

At the same time, efforts within the United Nations continue apace on the development of norms of responsible behavior in space and cyberspace that the Trump Administration has been (at least rhetorically) championing, including senior military leaders such as head of Strategic Command Gen. John Hyten. Poblete, in fact, has been the lead player at State in those discussions in Geneva and New York.

Further, the State Department has been in the end-stages of an effort to reorganize Poblete’s arms control bureau with an eye to elevating the attention to ’emerging’ security challenges including in the space and cyber domains.

The plan has been to separate nuclear arms control/treaty verification and space/cyber diplomacy into two separate bureaus under the so-called T-Family. That group of bureaus includes AVC, the Bureau of International Security and Nonproliferation whose job is to identify and mitigate proliferation threats, and the Bureau of Political-Military Affairs, responsible for arms export licensing and other defense-related functions. The new emerging security challenges bureau would have equal status to the current AVC, which would in essence keep the nuclear issues.

One of the goals of the reorganization, which is currently being vetted by Congress, is to draw the semi-independent Obama-era Office of the Coordinator for Cyber Affairs (formerly headed by Chris Painter) back into the traditional State Department structure, current and former officials tell me. It is unclear how Poblete’s leaving will affect the ongoing discussions with the Hill about the reorganization.

That said, Poblete’s resignation is unlikely to change the underlying philosophy of the Trump Administration that diplomacy, arms control and security-related agreements are of little use in ensuring national security. Poblete’s alignment on arms control issues echoes that of uber-hawk National Security Advisor John Bolton who has never met a treaty he liked.

As first published by the Washington Post yesterday, Poblete’s hawkish views (and aggressive attitude that was not appreciated by her subordinates) on Iran caused her to run afoul of her immediate boss, Undersecretary for Arms Control and International Security Affairs Andrea Thompson. Indeed, the rumor is that Poblete was forced out over Thompson’s belief that Poblete had fiddled with the facts in the annual report on Iran’s compliance with the 2015 nuclear deal. The Trump Administration last year withdrew from the deal and reimposed economic sanctions based on its judgement that Iran was not complying.

Whether or not that rumor is true, a bigger problem for State itself, according to insiders (including officials who worked with Poblete,) was that she refused to follow normal procedures, and often went around Thompson to Bolton. Thompson, I’m told by multiple sources, complained repeatedly to Pompeo about Poblete’s failure to coordinate, vet her official statements, etc.

Arms control advocates have been almost unanimously critical of the administration’s approaches to Iran, New START, and other security-related diplomatic endeavors. Thus, many have been ambivalent — to say the least — about Poblete’s departure, at the most recognizing that the lack of personnel is yet another obstacle to resolving the issues.

“The specific reasons for Assistant Secretary Poblete’s forced resignation are unclear. With her or without her, there is clearly a serious deficit of expertise, experience, and commitment to effective nonproliferation and arms control among the group of political appointees in this administration,” Daryl Kimball, executive director of the Arms Control Association, said.

This story has been corrected to reflect the fact that the post of Ambassador to the Conference on Disarmament (CD) in Geneva is filled, with Amb. Robert Wood serving there since July 2014.