WASHINGTON: The Marine Corps has long championed what are called non-lethal systems, designed to stop mobs from killing Americans without us having to kill them. After all, Marines are responsible for defending American embassies and consulates around the world, which are all too often threatened by rampaging crowds angry with whatever the latest American perfidy is seen to be. The Marines have also often done the nastiest close combat, so they appreciate the ability to fend off bad guys and have more choices than just killing the other guy — if they don’t have to.

In fact, Gen. James Amos, the commandant of the US Marine Corps, is the so-called “executive agent” leading the Pentagon’s multi-service Non-Lethal Weapons Program. “I remain committed to ensuring the Department of Defense’s leadership is aware of the state-of-the-art technology which is available to the joint force and am bullish about the role of systems such as ADS and how they may play in future operations,” Amos said.

That’s ADS as in Active Denial System, a Raytheon-built experimental weapon that use millimeter waves — close cousins to the microwaves you use to nuke your frozen burrito — to zap the surface of the target’s skin, producing intense pain without actual injury. 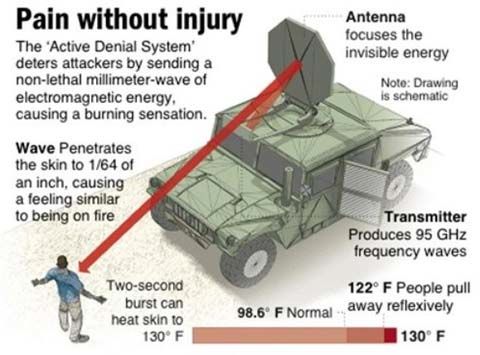 The system has been in development for years, including one abortive deployment to Afghanistan (it was never fired in anger). But in recent tests, the Marines and Army expanded the range of uses for the system, using it to repel boarders from small boats — as might be done to stop Somali pirates trying board a civilian ship or to keep Iranian small-boat swarms from getting too close to a warship.

An official news story says this was “the first time the system fired from aboard a boat, performed vessel-to-vessel engagement and deterred human targets aboard hostile moving watercraft.”

The test used small boats that could threaten “the safety of military vessels and every one on board.” The test demonstrated the Active Denial System’s ability to “keep hostile targets at bay without having to lethally engage them with machineguns or cannons.”

I’m stupid enough that I subjected myself to the Active Denial System described in this video. The system pictured in the video is one of three delivered six years ago under an Air Force contract. I’ve got first-hand knowledge of the system’s effectiveness. At the big Association of the US Army conference in 2008, I voluntarily pulled the trigger and shot myself — several times — with the heat ray it generates.

Here’s how I described it at the time when I was editor of DoDBuzz:

“Reporters can be really dumb. There I was in front of Raytheon’s booth at the Association of the US Army’s conference with a little button under my thumb. I hit the button. My lower thoracic area got very hot, very fast. So I waited for the machine to recycle and hit the button again. This time the pain was more intense — I wasn’t screaming or anything — and my skin felt like it was about to catch fire.”

The Raytheon system beams millimeter wave energy out to roughly 250 meters. The waves penetrate clothing and the top layer of your skin — but there they stop, and there’s a built-in safety so no one gets seriously injured. As you watch the Marine journalist in the demonstration, you’ll see exactly how it works. Beam hits you. You hurt. Your instinct is to pull away from the beam. You do. Pain soon stops. The system can sweep across a crowd or target a few people at a time.

Many of the non-lethal technologies the Pentagon has worked on have been abandoned because policymakers feared — irony of ironies — they might hurt someone. Under international law, it’s okay for military forces to use weapons that kill people, like bullets, but not ones that incapacitate, like tear gas or lasers that produce (in theory) temporary blindness.

This one has kept the faith so far, even though non-lethals get used a lot less than their early promise seemed to herald. Maybe one day, when Americans are in danger, we’ll actually see microwaves fired in anger  — although it’ll be a lot less “in anger” than shooting someone with a bullet.