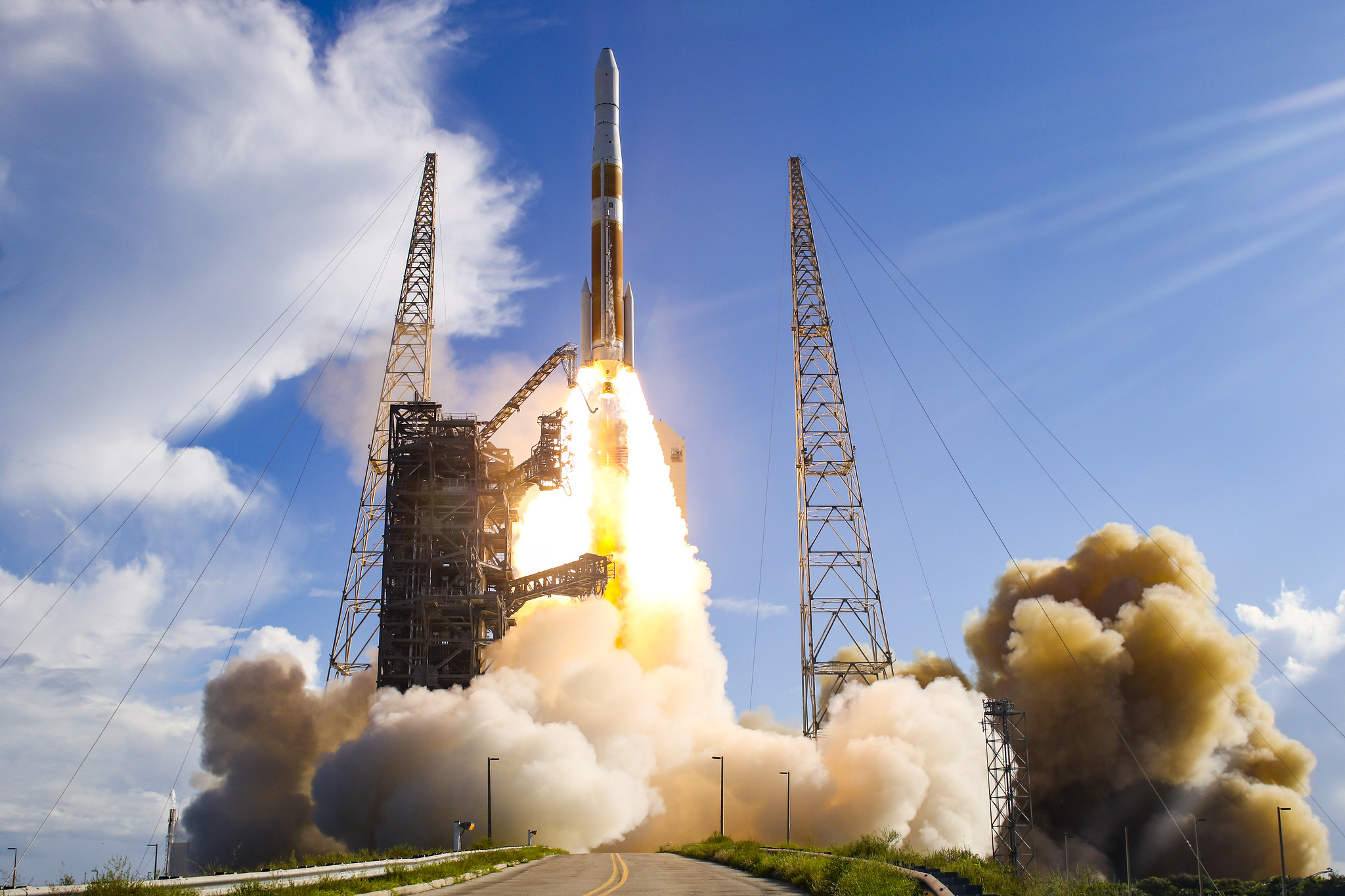 Indeed, in a pre-launch conference call with reporters on Tuesday, the Air Force’s GPS III mission team, led by the Space and Missile Systems Center (SMC), pronounced the program “in good shape.” According to SMC, “GPS III SV02 is the newest generation of GPS satellites designed and built to deliver positioning, navigation and timing (PNT) information with three times better accuracy, and up to eight times improved anti-jamming capability than its predecessor.”

“I’m very, very happy,” says Bill Sullivan, program manager for Raytheon’s Next Generation Operational Control Segment (OCX), which has been the proverbial poster child for screwed up space acquisition. “From where we were in 2015, I’m very happy about where we are today.”

Breaking D readers know the long saga of OCX’s travails, including a Nunn-McCurdy breach in mid-2016 –– meaning that the program had exceeded its costs by more than 25 percent, and had to get reauthorized by Congress. But the program has endured, partially because the Air Force simply could not afford to bail.

Sullivan says that since September 2017, when Raytheon delivered OCX Block 0 — also know as the Launch and Control System (LCS) — to Lockheed Martin and the Air Force, “we have held to schedule, we’ve held our cost.” The Block 0/LCS portion of the OCX system is used by Lockheed Martin and the Air Force to command and control the GPS III satellites during launch and up to launch checkout.

According to SMC, the OCX has passed its pre-launch satellite integration tests. “Successful completion of these tests, guided and monitored by SMC, provided a high level of confidence for the satellite’s ability to survive the launch environment, reach its operational orbit and perform its mission,” SMC said in a press release.

The full-up OCX system, when delivered in 2021, will make possible cyber-protected, improved anti-jam communications (uplinks of data and downlinks of telemetry information) for the entire fleet of 10 GPS III satellites, and the 22 GPS III Follow-On satellites, Sullivan said.

He noted that while Raytheon has been using some of the margin built into the contract plan, it has been “at a rate along what we estimated — in other words we’ve used some (time/cost) margin but we still have some left, so we’re not burning hot.”

With the launch of the second GPS III satellite, Raytheon’s OCX Block 0/LCS not only will be making a repeat performance, but also showing that it can handle more than one satellite at once. The first GPS III satellite, launched in late December 2018, is not yet operational. Therefore, the OCX system is currently being used by Lockheed Martin and the Air Force for command and control (C2) of it. Now, with two pre-operational birds on orbit, the system is controlling both.

Likewise, Lockheed Martin is now on track for on-schedule, on-budget delivery and launch of future GPS III satellites, after years of delay and programmatic restructurings since the original 2008 contract. Last year’s launch of the first GPS III (called SV01, or Vespucci) was more than four years behind schedule.

Johnathon Caldwell, Lockheed Martin’s vice president for navigation systems, told me yesterday that today’s launch, while delayed slightly due to ULA’s trouble with a parts supplier for its Delta IV rocket, “validates our overall plan of ‘back to basics’,” and “is a reflection of how far this program has come.”

The third satellite in the series is ready to be launched in January next year; the fourth is about to be declared ready to launch (with the launch date set but not yet announced by the Air Force). Caldwell noted that the GPS III production line “is running at top pace right now,” with “vehicles on the floor” through the ninth satellite (SV09).

Further, the GPS III SV-01 Vespucci is expected to be declared operational by the Air Force before the end of the year, according to Caldwell. That operational status will be made possible in part by Lockheed Martin’s stopgap operational control system — OCS, not to be confused with Raytheon’s OCX — software upgrade.  Called GPS III Contingency Operations (COps), it was developed to allow the legacy system (even more confusingly called the GPS Architecture Evolution Plan Operational Control System, or AEP OCS) used by all previous versions of the GPS satellites to handle the new GPS III configuration.  There are currently 31 operational GPS satellites dating back to the later 1990s: 1 Block IIA; 11 Block IIR; 7 Block IIR-M; and 12 Block IIF.

The GPS III satellites sport the encrypted, anti-jam, anti-spoof  M-Code, first installed in the GPS IIRM that were first launched in 2005. Just as importantly — at least for allied and civil users — is the new L1-C signal that allows interoperability with Europe’s Galileo constellation, Japan’s Quazi-Zenith Satellite System (QZSS), and (in principle) any future PNT satellite networks. The new signal will not just provide greater accuracy, but also greater availability — allowing your smart phone to connect to Google Maps even when stuck in so-called urban canyons where your phone has trouble getting a line of sight to the GPS sats.

The new signals capability in GPS III was the reason for Raytheon’s souped-up OCX program in the first place. But given the difficulties with OCX, the Air Force essentially decided to hedge its bets by contracting Lockheed Martin in 2016 to develop a software upgrade for the older operating system. The COps software upgrade was delivered to the Air Force in June.

Indeed, Caldwell explained, Lockheed Martin’s OCS sustainment activities actual comprise a rather large umbrella contract that includes various software upgrades. “Not many people know that Lockheed Martin has more than 30 years of not only building the satellites that make up GPS, but also working side by side [with the Air Force] on the ground system … used to fly the satellites,” he noted wryly.

For example, according to the company’s website, the Air Force in December 2018 “awarded Lockheed Martin the GPS Control Segment Sustainment II (GCS II) contract to continue to further modernize and sustain the AEP OCS through 2025.”

Yes, 2025 — beyond the date when Raytheon’s OCX is supposed to be up and running. Caldwell explained that the GPS operating system is “not a monolithic capability; rather a collection of capabilities.” Some of the upgrades implemented recently by Lockheed Martin, and some of those still in the works, will “outlive the transition from OCS to OCX,” he said.

Another critical software upgrade underway under the 2018 contract is updating the receivers, built by Lockheed Martin, in the Air Force’s GPS ground control stations. According to the company’s website, “In 2020, the AEP OCS is expected to receive the M-Code Early Use (MCEU) upgrade, which will allow control of M-Code, an advanced, new signal designed to improve anti-jamming and anti-spoofing, as well as to increase secure access to military GPS signals for U.S. and allied armed forces.”

Meanwhile, DoD continues to struggle with getting M-Code integrated into the various mobile GPS receivers used by more than 700 weapon systems in the field, from Army tanks to Air Force fighter jets. Raytheon, Rockwell Collins and L3 Harris are under contracts to build M-code hardware — called receiver cards — and software for service weapons platforms.

The Government Accountability Office (GAO) in December 2017 issued a report that found that while DoD “has made some progress on initial testing of the receiver cards needed to utilize the M-code signal,” additional development is needed. The GAO stated that “preliminary estimate for integrating and testing a fraction of the weapon systems that need the receiver cards is over $2.5 billion through fiscal year 2021, with only 28 fully and 72 partially funded.” It further warned that costs “will increase by billions when as yet unfunded weapon systems are included.”