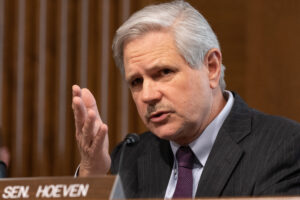 You don’t see lots of op-eds from members of the House or Senate appropriations committees. Why? The so-called cardinals — whose influence has slipped with the demise of regular budget order in the two chambers — remain among the most powerful figures on Capitol Hill because they have a greater say than most of their colleagues over how much money the US government spends. So we’re pleased as punch to be offering this piece by Sen. John Hoeven, a member of the SAC-D, about one of the key areas of disagreement between Republicans and Democrats in the defense policy and spending bills — nuclear modernization. Read on! The Editor.

Anyone who doubts the United States must modernize its nuclear deterrent need only look at the modernization efforts of the world’s other nuclear powers. Russia revealed a series of new strategic nuclear delivery systems last year, suggesting that nuclear weapons remain a key element of its national security strategy. China is expanding its nuclear posture, raising doubts about its minimal deterrence doctrine. North Korea has dozens of bombs and potentially can deliver them on Intercontinental Ballistic Missiles (ICBMs). To reaffirm the U.S. nuclear deterrent and extended deterrence commitments to our allies in this complex threat environment, we must prioritize the effective and efficient modernization of our nuclear triad.

Historically, nuclear modernization has received bipartisan support. In fact, the Trump administration’s Nuclear Posture Review is largely a continuation of the previous administration’s modernization plan. Bipartisan support continues for the air- and sea-based legs of the triad, which are fully funded in both the Senate and House versions of the 2020 National Defense Authorization Act (NDAA).  However, it appears to break down over plans to replace the Cold War-era Minuteman III ICBMs and their associated warheads as well as to enhance plutonium pit production, which is crucial to maintaining safe and effective nuclear weapons.

The Senate NDAA, which passed in June, provides $590 million for the Ground Based Strategic Deterrent (GBSD), $20 million more than requested in the president’s budget. The House bill proposes $80 million less than requested. The 2018 Nuclear Posture Review makes clear that the Minuteman III, first deployed in 1970 with a planned 10-year service life, will not meet future military requirements, such as penetrating advanced enemy defenses. Delays to the GBSD program would force us to spend billions to keep a less capable missile for more years and would only defer — not eliminate — the costs of developing a new ICBM. 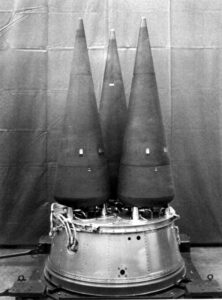 W78 warheads inside Mk 12A reentry vehicles for Minuteman III

The House bill also authorizes less than half of the nearly $110 million requested to replace the ICBM’s W78 warhead and would require additional studies examining the need for a replacement ICBM warhead, despite extensive analyses already provided by the Air Force and the National Nuclear Security Administration (NNSA). One of the oldest warheads in the stockpile, the W78 was first deployed in 1979. Its planned replacement, the W87-1, will provide enhanced safety and security for decades to come.

Instead of delays, we should ensure that DoD and the NNSA are coordinating development of GBSD and the W87-1. This synchronization is essential to ensuring a complete weapon system is ready to begin fielding a decade from now. One of my amendments in the Senate NDAA requires the Air Force and NNSA to report to Congress on the coordination of their respective programs so deployment of the replacement ICBM with a viable warhead occurs on time and on budget.

The Senate and House also diverge on plutonium pit production capacity. A pit is the “trigger” of a thermonuclear weapon. Many Americans would be surprised to know that the United States currently is unable to produce even a single weapons-grade plutonium pit and relies solely on pits produced decades ago. The Senate bill authorizes the entire $712 million request to support NNSA plans to produce 80 pits per year by 2030. The House, on the other hand, authorizes just over $471 million for a plan to produce only 30 pits per year. While surging plutonium production will not be easy, a shortage of usable pits could undermine the development of the W87-1 and future warhead programs.

I’m therefore pleased to have cosponsored a bipartisan amendment from Sens. Lindsey Graham and Martin Heinrich that commits us over the next decade to build our plutonium pit production capacity.

Underfunding the GBSD, the W87-1 and pit production all represent attacks on the timely fielding of a modernized land-based leg of the triad. This could eventually call into question the viability of the ICBM force in its entirety – a situation we must avoid.

Eliminating ICBMs would cripple our nation’s nuclear deterrent. As outlined in another of my amendments, our adversaries currently face hundreds of widely-dispersed ICBM silos that present an essentially impossible targeting problem and afford the U.S. President the immediate ability to respond in any crisis. The ICBM force also deters other nuclear powers, such as China, from attempting to build out their nuclear forces to try and compete on an equal footing. Should we choose to forego these advantages, we do so at our own peril.

Moreover, a move to a dyad posture would put enormous stress on U.S. nuclear bombers and submarines. Adversaries would concentrate their defensive efforts on undermining these systems. Without ICBMs, an adversary’s unexpected technical advancements – such as the use of AI and autonomous weapons to track our submarine fleet – would gut our strategic deterrent. 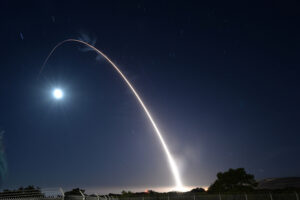 An Air Force Minuteman III ICBM launches during an operational test May 3, 2017

The security of American allies would also suffer. The United States would have to prioritize deterring attacks on the homeland when deploying the bomber and submarine fleets. This would weaken U.S. extended nuclear deterrence commitments to our allies and perhaps lead them to consider developing their own nuclear weapons.

Deterrence theory posits that an adversary must believe you have the will and capability to respond to the aggression you wish to deter. Allowing parts of our Cold War-era nuclear forces to continue to rust will call both into doubt and undermine the credibility of our nuclear deterrent. Modernizing each leg of the triad is a visible, tangible effort to demonstrate to our friends and foes that we are serious about nuclear deterrence.

When the House and Senate negotiators meet in conference to hammer out the 2020 NDAA, I hope the Senate position on modernizing the ICBM force and its warheads will prevail. If so, we can move on to the important task of ensuring, through diligent oversight, that the GBSD and W87-1 programs remain on budget and on schedule to replace the Minuteman III and bolster deterrence for decades to come.