Shut Up And Let Us Think: Army To Media, Industry Inquiries On Armed Aerial Scout 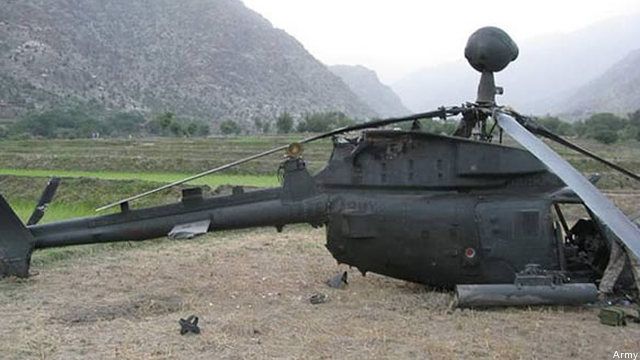 NATIONAL HARBOR, MD.: Shhhh! Don’t even whisper “Armed Aerial Scout” around Army leaders for a while. The mere phrase makes them jump in these parlous budget times.

Besieged by journalists and industry executives at the Association of the US Army’s annual aviation conference (click here for complete coverage), Army officials responded to inquiries about AAS with the frazzled frustration of a father asked for the tenth time “are we there yet?” — or, worse, with the forced smile of a father presented with an expensive Christmas wish-list just after his boss has told him there may be no money for bonuses this year.

“I am not going to tell you anything that you’ve not already heard,” Maj. Gen. Timothy Crosby, program executive officer for aviation, said at the conference. “I am not going to get in front of the senior leaders of the Army that are wrassling with where we go. Let’s face it, folks, we’re in a budget-constrained environment.”

Crosby took that mums-the-word approach when he was asked when and why the Army will start a new scout helicopter development program, and why drones can’t replace the 1960s-era OH-58D Kiowa Warrior? Crosby pointed out that the Army has done an analysis and found that “the need for manned reconnaissance is there.” But his lips were sealed when it came to predicting when Army leaders will decide on an aviation community recommendation they buy a new aircraft to replace the Kiowa Warrior.

“I think our Army leadership feels like there’s been too much media on it, that it’s forcing them into a position,” Crosby told reporters later, “where all they want to do is make a systematic decision, to evaluate all the options and look at a path ahead.”

Crosby’s comments follow a revelation earlier this month from Col. John Lynch, capability manager for reconnaissance and attack with the Army’s Training and Doctrine Command (TRADOC). Army aviation leaders asked the vice chief of staff in December to let them hold a competition to pick a new Armed Aerial Scout, but Gen. Lloyd Austin III told them to come back with more information, Lynch told a Boeing media brunch. The colonel went on to discuss when a decision might get made.

“We get up and say that we’ve pushed them into a decision, or on this day they’re going to make a decision, that’s unfair, I think, to the Army leadership,” Crosby told the reporters who mobbed him after his public remarks.

“I was guilty beforehand, before December,” Crosby said frankly. “We had a timeline to get to the boss and we were rushing to failure. We were rushing in with decisions without giving them the opportunity to make their assessments. That’s why they’re the senior leaders. They need to have that time to make that decision.”

The aviation community recommendation follows numerous studies, a series of flight demonstrations last year by companies with helicopters to offer, and the failure of two previous attempts to replace the OH-58 over the past two decades — first with the stealthy RAH-66 Comanche, cancelled in 2004, and then with the ARH-70A Arapaho, cancelled in 2007. (At least the Army’s trying to replace the OH-58, though: Under current plans, most current helicopters will have to stay in service until sometime after 2030).

All the studies and flight demos the Army has conducted can’t answer the central question the service’s senior leaders face in deciding the issue: Can they afford it? The aviation branch of the Army is just one of its many “tribes,” all of whom have to share in the service’s shrinking budget. And Vice-Chief Austin was holding off on Armed Aerial Scout even before Deputy Defense Secretary Ashton Carter sent military leaders a memo last week telling them to get ready for possible budget sequestration and a continuing resolution that could preclude starting any new programs for the rest of the year.

Crosby told the AUSA audience that he and Maj. Gen. Kevin Mangum, commanding general for the Army Aviation Center of Excellence and Fort Rucker, presented their views on Armed Aerial Scout to senior leaders – i.e., Austin – and “now the Army must make some tough decisions.”

Crosby also admonished industry, who made up most of the symposium audience, to let Army leaders ponder the matter in peace. “I know industry’s chomping at the bit,” he said. “You did a great job supporting us with the demo and the analysis that we’ve done, but let’s don’t rush and compel people into a decision that we’re going to have to change in six months or maybe in a year.”

One industry official present said the message he took from that remark was, “Take a knee. Let the budget issues get resolved. Let the Army find out just how much money they’re going to have to spend. Quit putting pressure on the leadership to make a bad decision early.”

Crosby told the conference: “If I sound defensive, please, I don’t mean to be. I just want us to all not pressure ourselves into making a decision that will not be a long term solution.”