Sikorsky Be Nimble: S-97 Raider Shows Off For Army FARA

JUPITER, FL: Sikorsky’s S-97 Raider showed off its agility this morning in the first test flight the company has opened to the press. Flying sideways, backwards, in pirouettes, and in a markedly quiet stealth mode, the hybrid helicopter-turboprop demonstrated the maneuverability the Army considers essential to survive high-tech future battles with Russia or China. 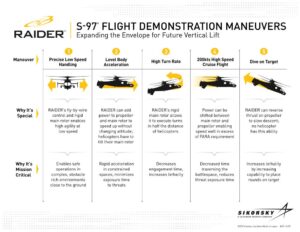 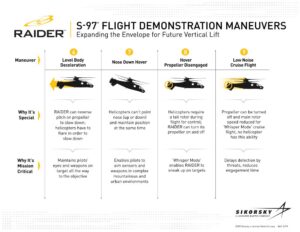 The Army’s Future Attack Reconnaissance Aircraft (FARA) needs not only to fly faster and further than existing helicopters in order to penetrate advanced air defenses: It also has to fly more nimbly at low speeds and altitudes, slipping behind ridgelines and between buildings to evade detection. Sikorsky’s approach to the problem, as shown by the S-97 — from which their FARA design is closely derived — combines a novel rotor-and-propeller configuration, called a compound helicopter, with an ever-increasing amount of automation to assist the human pilots.

Getting the software right is critical, and the test pilots today reported they weren’t happy with the latest tweak to the subsystem that reduces vibration, a bane of helicopters trying to reach high speeds. As a result, lead pilot Bill Fell briefed visiting reporters and Sikorsky subcontractors after the flight, he didn’t push the aircraft to 200 knots (230 mph) as originally planned for this morning, instead staying at 190. 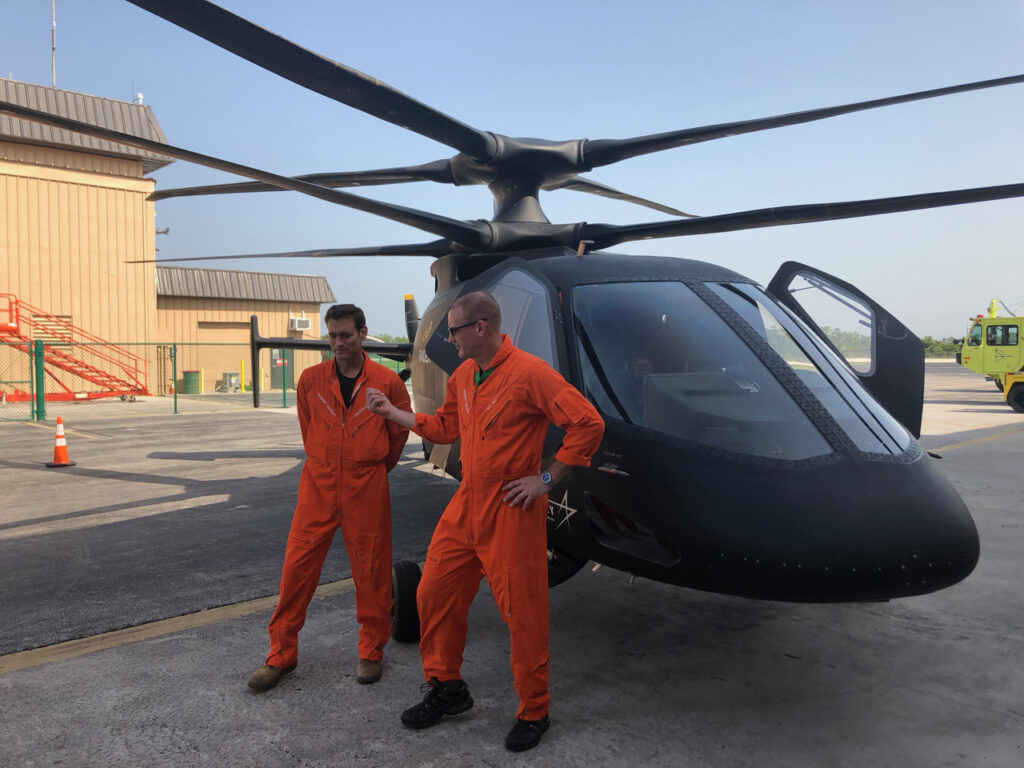 S-97’s speed depends on its pusher propeller, mounted in back of the aircraft where Apache has a tail rotor. At high speeds, where helicopter rotors struggle to overcome vibration, drag, and other aerodynamic inefficiencies, S-97’s flight control software automatically diverts most of its engine power to the propeller. At those speeds the helicopter-style rotors — made of ultra-rigid materials to control vibration — do still spin to provide upward lift, using 5-10 percent of total power, but they leave it to the prop to provide most of the forward thrust. Conversely, when you want to sneak up on someone, you disengage the pusher propeller and route all the power to the rotors, which are much quieter — and still move you at a respectable 130 knots. 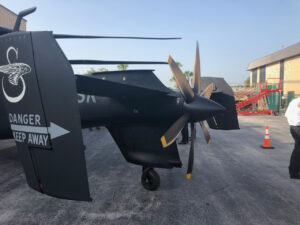 Pusher propeller and tail of the Sikorsky S-97 Raider

While the primary reason for this compound helicopter design is to achieve speeds greater than any conventional helicopter, it allows superior agility as well, Sikorsky execs and pilots said. The same rigidity in the rotors that minimizes vibration at high speeds also makes them very responsive to pilot inputs, like the tight steering and suspension on a sports car. And the same pusher propeller that provides the thrust for high-speed flight can also act as a brake, spinning in reverse to bring the aircraft to a sudden stop. In fact, one of the subtler advantages of the propeller — which takes a little explaining — is how it can pull in the opposite direction to the main rotors, enabling the S-97 to maneuver in ways no traditional helicopter could.

The Army’s current aircraft, lacking propellers, rely entirely on their main rotor to govern their speed, and the angle at which the rotors bite the air makes a major difference. If you want to speed up, you tilt the whole aircraft forward. If you want to slow down, you tilt it backwards — which incidentally means you can no longer see what’s underneath you, which is awkward and potentially dangerous if the reason you slowed down was in order to land.

But the S-97 can use the rear-mounted propeller to counteract the rotors. You can tilt forward without going faster or tilt backwards without going slower, which means you can angle the aircraft whatever way is best to see what you’re interested in — a landing zone, an enemy target, an obstacle — and still maintain your desired speed. (That is, unless you want to go over 150 knots, in which case you’ll need to level out). The S-97 can even hover in place while you point the nose up and down at will: Traditional helicopters can’t do that, because they can only hold still if they stay level. 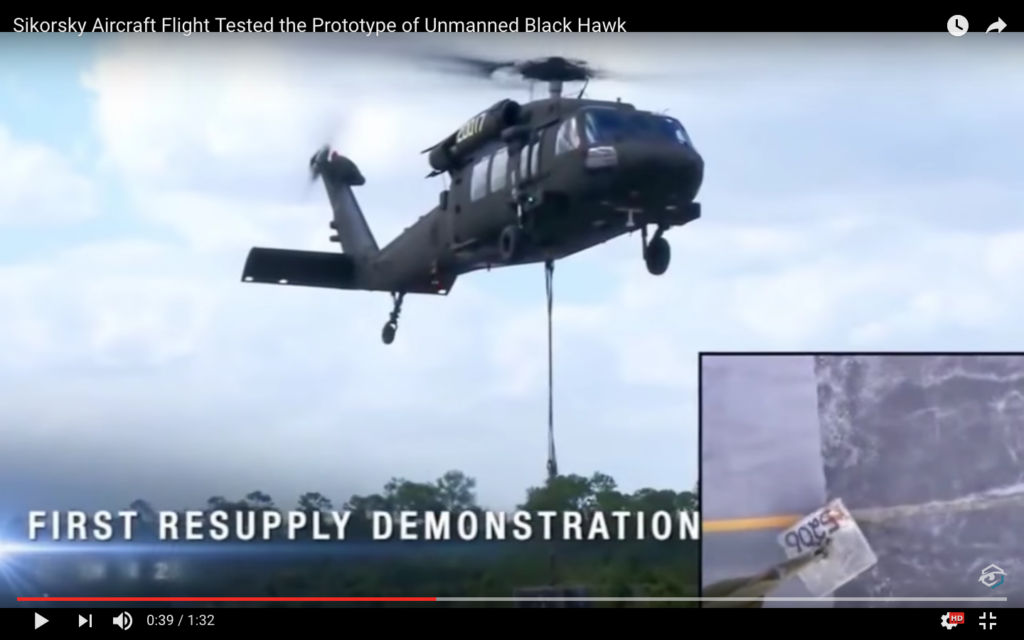 Even if you hold a conventional helicopter level, not letting its nose tilt up or down, it will still wobble enough that the pilot must make constant tiny corrections to keep it hovering in place. On S-97, you don’t have to do that, because the computerized fly-by-wire controls make the micro-corrections for you automatically, even countering sudden gusts of wind so smoothly you don’t notice any change, said Fell’s copilot, Christiaan Corry. (Yes, he sighs, it’s really spelled that way). Now, this particular feature isn’t unique to S-97: It’s found on the new upgraded K-model of the venerable CH-53, which Corry has also flown, and indeed on any helicopter with a modern fly-by-wire system. But fly-by-wire combines with S-97’s unusual compound helicopter configuration to increase agility even more. 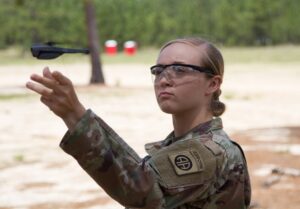 Sikorsky, however, wants to go beyond fly-by-wire to much higher levels of automation. This is not artificial intelligence, the company emphasizes: Machine learning algorithms modify themselves in ways their human designers can’t predict and often can’t explain, which is anathema to the rigidly controlled world of aircraft safety testing. But the company has spent years developing testable, predictable algorithms that can assist an overburdened pilot or even fly the aircraft unmanned in some missions.

So far, Sikorsky hasn’t tested its MATRIX automation on a compound helicopter, only on a conventional helicopter: a specially modified UH-60 Black Hawk known as the OPV, Optionally Manned Vehicle, which is also in testing at this Florida facility. Testing the two technologies on separate aircraft reflects an engineer’s instinct to control the variables. After all, if you have two revolutionary new systems on the same aircraft, it’s hard to figure out whether any particular problem is caused by one, the other, or both in some unexpected interaction.

However, both the compound helicopter configuration and the automation are now mature enough that Sikorsky is preparing for the next step: combining both on a single aircraft. That won’t be S-97, but Chris Van Buiten, Sikorsky’s VP for innovation, said the design being refined for FARA is “a logical place” to “cross the streams.”

FARA won’t just use automation to improve its own flight qualities: It will also oversee multiple drones — the Army wants four at a time — acting as communications relays, decoys, jammers, scouts, and even armed wingmen. The Army even envisions FARA opening its weapons bays to disperse swarms of mini-drones, formally known as Air-Launched Effects. The service still sees a vital place for human pilots on the future battlefield, but it wants a lot of automation to help them survive.