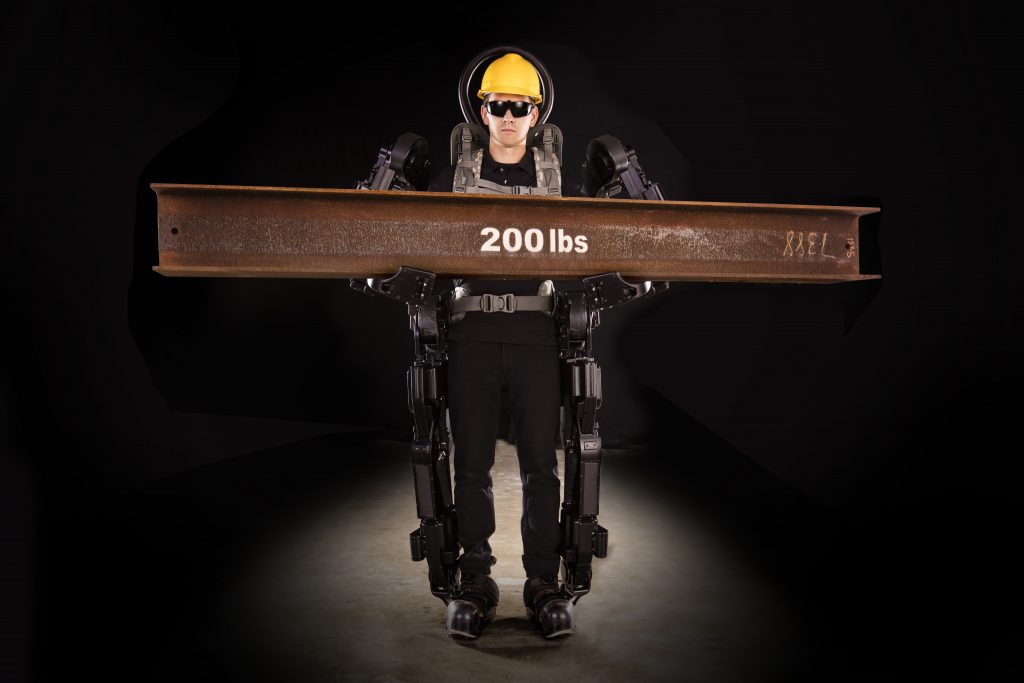 UPDATED with Sarcos interview WASHINGTON: What moves three miles per hour and can lift 200-pound loads all day without recharging? Well, potentially you or me, if we’re wearing powered exoskeletons.

That’s why Special Operations Command  — which is also on the cutting edge of military AI — has joined the Air Force and the Navy in testing the Guardian XO exoskeleton from a Nevada-based small business called Sarcos, the company announced today. UPDATE The company also plans to provide prototypes to partner companies like Bechtel, BMW, Caterpillar, Delta, GE, and Schlumberger “at the end of this year,” CEO Ben Wolff said in an interview. 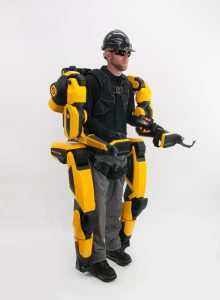 No, this isn’t the so-called Iron Man powered-armor suit sought by former SOCOM commander Adm. William McRaven, known as TALOS — Tactical Assault Light Operator Suit — and effectively abandoned as impractical earlier this year. While exoskeletons have made real progress in the last decade, they’re still heavy, bulky, awkward, and ravenous for electricity, and SOCOM said special operators don’t “feel comfortable” wearing even limited systems into close combat. Troops will test a kind of motorized leg brace that helps them on long marches and distant runs, then strip it off before entering battle.

But even special ops units spend a lot more time maintaining their gear and hauling supplies than shooting bad guys, which means exoskeletons can actually be useful in the near future. Anything that lets troops lift 200 pounds over and over for hours without getting exhausted or injured is a potential godsend for support troops who have to, say, manhandle missiles onto helicopter launch racks, wrangle heavy fuel hoses, or lift broken engine parts out of vehicles.

While SOCOM and Sarcos aren’t saying who the exoskeleton is for, one prime candidate is the 160th Special Operations Aviation Regiment (SOAR), whose troops fly, refuel, rearm, and repair a fleet of helicopters. SOAR operates out of some pretty rough places, but even an ad hoc Forward Arming & Refueling Point (FARP) is a much safer environment to clunk around in an exosuit than a frontline firefight, and there’s plenty of stuff to lift.

Sure, the suit itself is one more piece of heavy equipment to transport and maintain, but transporting and maintaining heavy equipment is what logistics troops — as opposed to frontline infantry — do all the time. And if the exoskeleton replaces some even bulkier equipment, or saves troops vital hours preparing for combat missions, or prevents injuries, it’s well worth trying.

Sarcos’ partnership with the Navy is much clearer. Announced just a week ago today, it’s a Cooperative Research & Development Agreement (CRDA) specifically with the Puget Sound Naval Shipyard and Intermediate Maintenance Facility (PSNS-IMF) in Washington state. The complex has 14,000 uniformed and civilian employees, many of them no doubt with back and shoulder problems from holding heavy welding torches and power tools at unnatural angles for hours on end. The yard will also try out Sarcos’s Guardian S inspector robot, a 17-pound snake-like … thing … on tiny tracks that can wriggle into tight spaces carrying cameras and other sensors.

Sarcos’ longest-standing relationship with the armed forces appears to be with the Air Force. The service awarded the company a Small Business Innovation Research (SBIR) contract in 2017 “to develop a full-body exoskeleton for logistics applications” and another contract last year to increase the load-bearing capacity from 80 pounds to 200. The first press release specifically mentioned “pushing and pulling, loading and unloading crates, and carrying payloads over a wide variety of terrains.” Not as glamorous as combat, but as Warrant Officer Ripley from Aliens could tell you, still pretty cool:

Now, how do you translate science fiction into practical reality? Historically, the two big barriers are power requirements and control systems. Most experimental exoskeletons burned so much energy they had to stay plugged in all the time. The imposing but impractical HULC suit of the 2000s could untether itself from its electrical umbilical cord, for a little while, but the same bulky mechanics that boosted the wearer’s strength also inhibited their movements so badly they got exhausted fighting it.

When Sarcos built its first prototype exoskeleton for DARPA back in 2000, “we had a hydraulically actuated machine that consumed about 6,800 watts of power,” CEO Ben Wolff told me. By 2010, DARPA and Sarcos (at the time, part of Raytheon) had more than halved that, to 3,000 watts — comparable to modern mini-drones with short flight times — but the power supply for extended operations was still too bulky. For scale, Home Depot offers a 6,800-watt Honda generator for $1,049 that’s the size of a wheelbarrow and burns a gallon of gas an hour. Honda’s “portable” 3,000-watt generator weighs 144 pounds, still not exactly practical to carry around.

“God knows we tried. We tried everything from batteries to internal combustion engines,” Wolff said, but no current technology offered enough power in a sufficiently compact package. “Rather than wait for the arc reactor,” he told me, the company changed focus from supply to demand: “How do you reduce power consumption?”

Today, Sarcos has streamlined their design so efficiently, Wolff said, that “we have now successfully tested out our exoskeleton waking at three miles per carrying 160 pounds of load” — not counting the suit itself or its operator — “and burning less than 500 watts of power.” That’s more than a 92 percent reduction since 2000.

“With today’s lithium ion battery capabilities…we are able to get up to eight hours per work session between charges,” Wolff said. The system uses three batteries, total weight under 45 pounds, wired so you can replace a drained battery with a new one (a “hot swap”) without shutting the suit down.

To avoid wasting power, or wearing out the user, the exoskeleton also works with the operator rather than against them. “Next to power consumption, our control scheme is the second most important thing we’ve been able to achieve,” Wolff said. “The machine just flows with you…The limbs are always trying to stay out of your way and never be in a situation where the suit is fighting you.”

In fact, Sarcos bluntly calls their control system “Get Out Of The Way.” Sensors all over the suit track its motions and report to the software, which quickly calculates what the operator is trying to do — “in milliseconds,” Sarcos says — and commands the actuators to move with it and amplify it: Enough muscle power to lift one pound makes the machine exert enough force to lift 20. The actuators can also dial down the power to allow precise fine-motor movements; Sarcos actually developed one of the first mechanical arms able to handle an egg without breaking it.

Overall, the system of sensors, actuators, and software processing used in the Guardian XO “is more complicated in many respects” than the humanoid robots Sarcos has built for NASA spacesuit testing and other functions, Wolff said. “The exoskeleton… it is a wearable robot.”

That said, the suit uses straightforward deterministic algorithms, not artificial intelligence — for now. For the near future, however, Sarcos is considering using machine learning so the suit can tailor itself over time to the unique gait and motion of each operator or learn the best approaches to specific tasks.

In the longer term, Sarcos could also build different types of exoskeletons optimized for different tasks. The Guardian XO is emphatically an industrial workhorse, but — “if somebody was interested in a more fleet-footed, lighter-duty machine that could provide more agility in the field, that’s something is certainly doable,” Wolff said. “80-85 percent of the DNA of our logistics machine would be reused for that application.”

“I can’t say we’re working on that or not,” Wolff said when I pressed him on which version or versions SOCOM was interested in. But you can’t maximize strength and speed and agility in the same exoskeleton, he said, any more than you can carry Humvees in an F-16 or dogfight in a C-130.

“Exoskeletons can be made to do a lot of these different kinds of tasks but there’s going to be tradeoffs,” Wolff said. “If somebody wants it to be able to scale a wall and run eight miles an hour and also carry 300 pounds, now you’re getting into the realm of needing to give me the arc reactor.”

It may be disappointing that no one is going to use the Sarcos exoskeleton to punch supervillains or alien bug-queens. But logistics has been a crucial American advantage since the “arsenal of democracy” days of World War II, and exoskeletons could help sustain that advantage for decades to come.