US Air Power: The Imperative For Modernization (Buy The F-35) 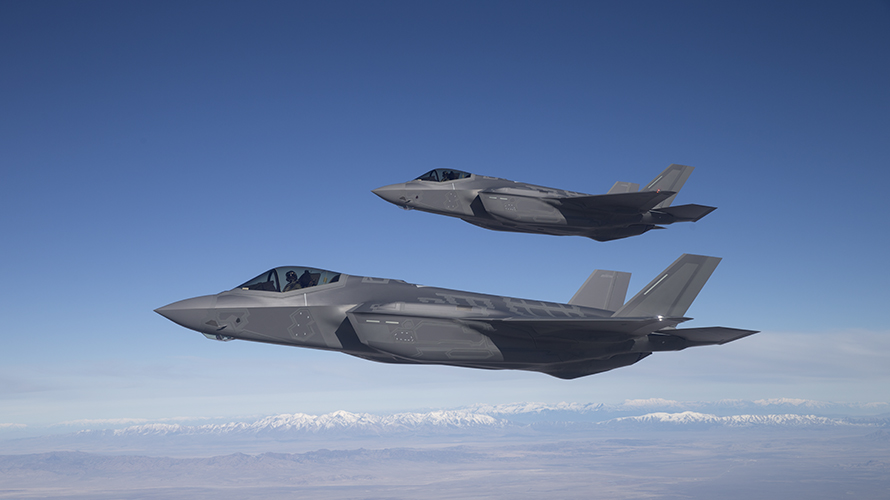 In 2006, a relatively obscure book caused a major stir among the U.S. Air Force leadership. Why Air Forces Fail, edited by Robin Higham and Stephen J. Harris, lays out the determinants of failure: deficiencies in the industrial base, misguided technology and tactical picks, inattention to logistics and neglect of training. The case studies are broken into three categories: ”Dead Ducks,” those who never had a chance to win; “Hares,” who did well at the outset, but failed to exploit their success; and “Phoenixes”–who overcame early defeats to carry the day.

The book crystalized the Air Force’s battle with Defense Secretary Robert Gates, who describes the service as “one of my biggest headaches” in his own book, Duty: Memoirs of a Secretary at War. In Gates’ eyes, the Air Force suffered from “next-war-itis”—focus on future wars with peer adversaries, rather than combat in Iraq and Afghanistan.

I served as special assistant to Air Force Chief of Staff Michael “Buzz” Moseley, and witnessed the escalating discord first hand. I read Why Air Forces Fail and concluded the book was looking at failure through the wrong end of the telescope. I briefed my findings to the leadership, bolstering the need to modernize and recapitalize a force that was already the oldest and smallest in its 60-year history.

Then, in June 2008, Secretary Gates fired Air Force Secretary Michael Wynne and Moseley — an unprecedented dual decapitation. Their sin? Strategic foresight, in the form of their unwavering advocacy for full procurement of the F-22 and F-35; development of the Next-Generation Bomber (now known as the B-21), new tankers, Unmanned Aerial Vehicles (UAS), combat search and rescue helicopters; space systems’ upgrade; nuclear modernization; and operational cyber-warfare.

But the new leadership focused exclusively on Iraq and Afghanistan. As the National Defense Strategy makes clear, the inevitable return to great power competition make Wynne, Moseley’s and my analysis even more relevant today.

Air Forces — and militaries — do not fail by themselves. Failure occurs in a national context, wherein “ducks, hares, and phoenixes” don’t suffice as an explanation.

History is replete with examples of disasters born of lack of strategic foresight: The U.S. Army after the Civil War — arguably the most experienced on the planet — spent 30 years fighting the Indians, only to later struggle to deploy a brigade to Cuba. Likewise, Britain and France let their conventional power fade–while their hubris blossomed– after post-1815 resulting in a blood bath in the Crimean War and near-existential disasters in the two World Wars that followed. In the wake of a spectacular victory in June 1967, the Israeli Defense Forces rested on its laurels, secure in the soon-to-be-proven fallacy that past successes and strategic depth would deter any emerging threat. Six years later, in October 1973, Israel fought for its very survival, having fallen victim to a strategic surprise masterfully orchestrated by seemingly defeated foes.

The implications are clear. First, aggressors tend to assume risks that seem irrational — and, thus, improbable — to the intended victim. This leads to strategic dislocation, and, potentially, catastrophic failure. Second, credibility born of past successes rarely suffices as a deterrent. Third, hubris kills.

The U.S. must balance current exigencies with future requirements. Any single-focus approach bears a huge opportunity cost. The world has not taken a time-out to allow the U.S. to tend to Iraq and Afghanistan. Instead, competitors exploited the emphasis on the lower end of the conflict spectrum to leapfrog in areas where the U.S. took its dominance for granted. To paraphrase Secretary Jim Mattis: victory—or air superiority—aren’t birthrights. We take them for granted at our own peril.

Future conflicts will be more lethal and more difficult to control than ever. The potential for strategic surprise is high, and the military’s residual capacity is at a historic low. Concepts and structures, valid for a specific time and place, should not be allowed to become dogma. That too is a prescription for failure.

Debacles-in-the-making develop over time, usually offering plenty of opportunities to spot them and correct the downward spiral. What prevents that course correction are systemic deficiencies, wishful thinking, and the inherent human ability to adjust to a “new normal” –the fluctuating baseline of what is deemed acceptable.

Operating the smallest, oldest, and least ready force the USAF has ever fielded is a clear example. The decline has been long in the making. The baseline of “the new normal” has been shifting through three decades.

For a nation whose security is predicated on a strategy of dissuasion, the most fundamental risk is deterrence failure. Deterrence is the product of capability, will and credibility. It exists in the eye of the beholder. Its success is measured only in the breach. Thus, the question “how much is enough to deter” is purely theoretical—unless one is seeking to dissuade oneself.

The future security environment will be shaped by the interaction of globalization, economic disparities and competition for resources; diffusion of technology and information networks whose very nature allows unprecedented ability to harm and, potentially, paralyze advanced societies; and systemic upheavals impacting, international institutions and the world order. Ascendant powers are translating lessons from recent conflicts into new concepts and capabilities tailored to counter our strengths and exploit our vulnerabilities.

Specifically, anti-access/area-denial weapons, designed to blunt U.S. power projection capability have been widely deployed by Russia and China, as well as Iran and North Korea. Generation “4-plus” and true 5th-gen aircraft that challenge America’s aging fleet have been introduced into both Russia’s and China’s inventories. Increasingly lethal, integrated air defense systems (IADS) have proliferated world-wide, as have surface-to-surface missiles. Concurrently, the proliferation of robotics, resurgence of offensive space capabilities, as well as the ability to disrupt civilian and military activities through cyberspace and the electromagnetic spectrum, are transforming warfare.

So, the U.S. should expect to be challenged in all domains: on land, at sea, in the air, space, and cyberspace.  Perhaps for the first time in history, the ability to inflict damage and cause strategic dislocation is no longer directly proportional to capital investment, superior motivation and training, or technological prowess.

The U.S. must remain vigilant to breakthroughs in quantum computing, artificial intelligence, nanotechnology, electromagnetic spectrum physics, advanced propulsion, photonics, biotechnology — and more — anywhere in the world. The U.S. must prepare for innovative combinations of new and legacy concepts, weapons and disruptive technologies.

The U.S. must enhance its own asymmetric advantage by delivering global surveillance, global command and control, and the requisite speed, range, precision, persistence and payload to strike any target, anywhere, anytime, in and through any domain. For a great power like the U.S., there is no such thing as a minor setback. Once the U.S. commits its prestige, victory is the only acceptable outcome. The alternative diminishes America’s stature, credibility and influence, as well as alliance cohesion.

In the age of knowledge, decision superiority, resiliency, agility, mutually supporting governance structures and reliable allies and partners are indispensable to victory. America will succeed in the 21st century only by resourcing a strategy that closes the gap between ends and means. Time is not on our side.

No modern war has been won without air superiority. No future war will be won without air, space and cyberspace superiority. To promote and defend America’s interests, the Joint Force must attain cross-domain dominance: the freedom to attack and the freedom from attack in and through: the oceans, the atmosphere, space, and the electromagnetic spectrum—as well as on the ground. Cross-domain dominance integrates systems, capabilities, and operations to gain competitive advantage across the board. It maximizes synergies among the Services, generating an array of simultaneous, synchronized effects, which allow Joint Force Commanders to achieve desired outcomes across the full range of military operations.

This is the strategic context within which all acquisitions must be viewed. Take the F-35 as an example: It is the most lethal, survivable and connected aircraft in the world, giving warfighters a priceless asymmetric advantage. Its advanced capabilities transform the way operations are conducted—today and tomorrow. It is also produced jointly with and sold to a range of allies, thus strengthening national security and forging global partnerships.

More than a strike fighter jet, the F-35 is a force multiplier with an advanced sensor and communications suite that enhances the capabilities of networked airborne, sea and ground-based platforms–thus granting the entire Joint Force a much-needed edge. As technology and threats continue to evolve, industry must ensure that the F-35 remains ahead of the pack. Follow-on modernization — a part of DOD’s Continued Capability, Development and Delivery (C2D2) framework — offers an agile approach to deliver timely, affordable, spiral capability improvements.

The simple truth is that the F-35 is America’s only 5th generation aircraft in production. Over the past two decades, the number of aircraft designed for high-end warfare has declined precipitously. The U.S. acquired only 21 B-2 Spirit stealth bombers, a small fraction of the original order of 132. The F-22 Raptor — the most capable combat aircraft in history — fell victim to similar strategic myopia, with fewer than half of the required 381 jets procured. Their production line doesn’t exist anymore. In other words, the U.S. failed to anticipate and learn.

That failure is a prescription for disaster—not just for Air Force but for the Joint Force and our allies. We must counter the proliferation of advanced technology — which is allowing more actors to contest U.S. power in more threatening ways — by buying all the 2,456 F-35s planned for the Air Force, Navy and Marines. Its unrivaled stealth technology will guard against catastrophic attrition, allowing pilots to maneuver undetected in lethal, denied environments.

The U.S. will have neither the buffer of time nor the barrier of oceans in future conflicts. The character, tempo and velocity of modern warfare already severely test America’s ability to adapt. Rising to this challenge is not a choice; it is a shared responsibility and a national imperative.

Lani Kass is corporate strategic advisor at CACI, a defense and intelligence company. She served as senior policy advisor to Chairman of the Joint Chiefs of Staff, served as special assistant to the Chief of Staff of the Air Force and was a professor of military strategy at the National War College, where she served for 20 years at NWC. This article expresses her personal views only.