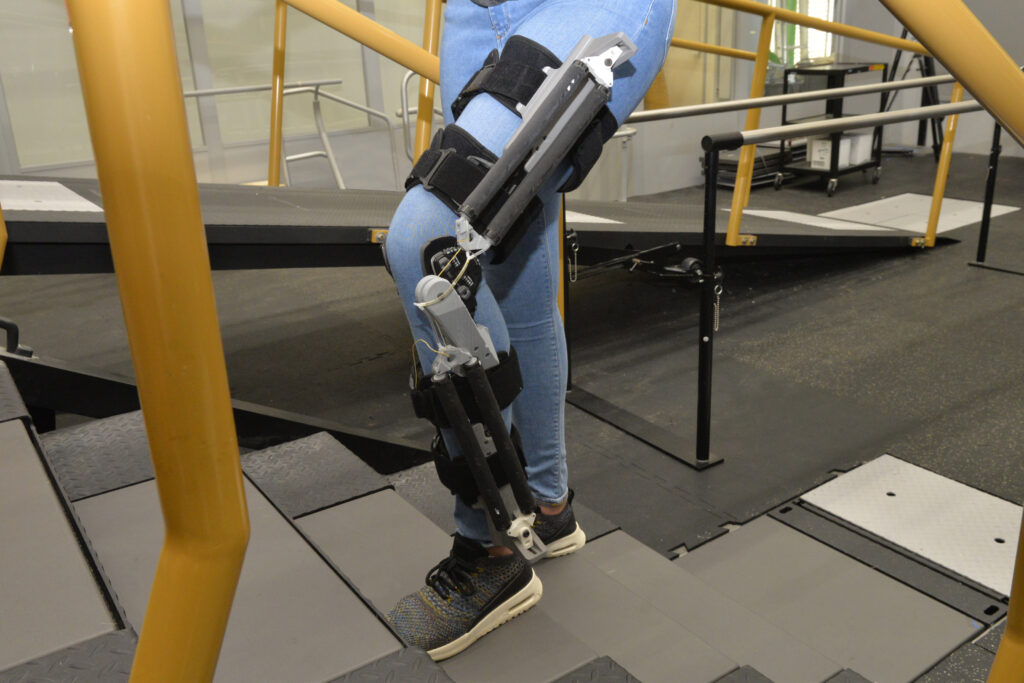 This elaborate leg brace is actually a “soft exoskeleton” designed by Lockheed Martin to support the leg and boost its strength — a potential godsend for overburdened US foot troops on long patrols.

WASHINGTON: Adhesive patches that monitor your health by analyzing chemicals in your sweat. A flexible sheet of radio-receiving electronics you can bend into different shapes to pick up different wavelengths, nicknamed the “origami antenna.” A strength-boosting exoskeleton that detects the tiny electrical charge just before your muscles flex, then moves with you by inflating artificial muscles that one of the inventors likened to “very robust party balloons.”

These are all real examples, now in testing, of what’s called soft robotics or flexible hybrid electronics: miniaturized, ultra-thin electronics printed onto flexible fabric. (It’s a form of additive manufacturing). The US military sees potential here for everything from lightweight drones to wearable health monitors to exoskeletons for combat troops. Now that Special Operations Command has abandoned its TALOS project to build Iron Man-style powered armor, soft robotics — either on their own or in combination with rigid exoskeletons — may be the best bet for a revolution in soldier protection and augmentation. 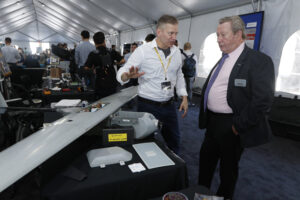 A Lockheed Martin drone on display at NextFlex Innovation Day 2019

Last week, over 300 representatives from companies, universities, and the Defense Department gathered in San Jose for the annual Innovation Day — essentially a science fair for pros — hosted by a public-private partnership called NextFlex. With over 100 corporate and academic institutions, plus 40 DoD agencies, having joined the partnership since its founding in 2015, NextFlex is jointly funded by private sector members and the Pentagon.

“We have two sets of projects,” said NextFlex executive director Malcolm Thompson, an English scientist turned American entrepreneur. Much of the soft robotics R&D has commercial applications, especially in the medical field. Those include wearable bio-monitors to track everything from hydration to stress to how well injuries are healing. They’re also developing a disposable temperature sensor you can stick on a package — “like putting a stamp on an envelope,” Thompson told me, “peel and stick!” — to make sure blood samples or pharmaceuticals inside don’t get too warm in transit. 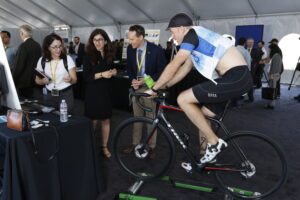 But other NextFlex projects, while they might have civilian uses, are of immediate interest to the military. Georgia Tech and Lockheed Martin are now leading development of a soft exoskeleton to boost soldiers’ lower-body strength, without the heavy and inflexible frame of traditional rigid exoskeletons. About two dozen prototypes will be built over the next year.

“We are very focused on this one,” Thompson told me. “The DoD are very keen.”

The layers of the soft exoskeleton to support the leg being designed by Georgia Tech and Lockheed Martin.

In essence, the soft exoskeleton looks like a high-tech leg brace. It’s actually an array of tiny sensors, 3D-printed onto wearable materials like neoprene and spandex, and inflatable tubes that inflate and deflate on command. The tubes act like “very robust party balloons,” said Georgia Tech engineer Frank Hammond. (A more technical term is pneumatic actuator.)

When sensors detect the wearer’s leg muscles are about to contract — and how they detect that is a scientific wonder we’ll delve into in a moment — they let high-pressure air into the tubes designed to work with that group of muscles. As the tubes inflate, they straighten out, helping move the leg into position. (Even more sensors inside the tubes track the precise pressure of inflation). When the muscle relaxes, the tubes deflate.

Okay, so this reality is a little disappointing if you’d hoped for Iron Man, Starship Troopers, or Space Marines leaping over enemies and smashing them with massive metal weapons. But real-life US foot troops are routinely weighed down by nearly 100 pounds of gear: body armor, weapons, ammo, water bottles, radios, night vision goggles, spare batteries, etc. ad nauseam. That means they struggle to keep up with lightly armed Taliban in rough terrain, not to mention suffer an epidemic of knee, back, and ankle injuries. The Army’s already investing in robotic mules to help foot troops haul heavy loads, so a simpler, smaller device soldiers can wear to helps bear the weight is worth a try. 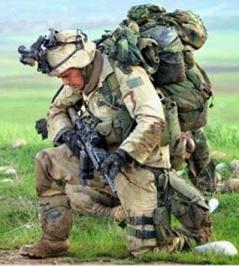 While the first iteration is built to support the knee, “it could fairly easily be translated to other joints,” said Georgia Tech biomedical engineer Aaron Young. The knee is a straightforward starting point because it only bends one way. (Well, it had better not bend sideways or else it’s going to hurt). But with additional pneumatic actuators and more complex controls, Young said, the system could handle the wider range of motion of the hips and ankles, further improving lower body support, or even the shoulder, potentially boosting upper-body strength for carrying and climbing.

What makes this pneumatic, flexible system better than the rigid metal exoskeletons used in other experiments? It’s a lot lighter, so it doesn’t have to spend a lot of energy moving its own weight before it starts to help the wearer. There’s much less metal in the structure, and much smaller batteries as well, since the main power source is a five-pound canister of compressed air, not too different from what you’d use to inflate a bicycle tire. (You’d swap in a new can as the old one ran out, although the researchers are trying to make a single canister last for several hours of operation).

The soft system is also less likely to injure the wearer by accident, is easier to fit to different body types, and is less of an encumbrance when it’s turned off or breaks down. But the technology is less developed than the rigid systems. And even at its full potential, a soft system can’t do everything a rigid one can.

“What soft exoskeletons can bring to the table [is] they can reduce metabolic cost and transport, they can provide energy to the body that reduces our own caloric burn,” said Keith Maxwell, Lockheed Martin’s product manager for exoskeletons. “What they can’t do is transfer load off the body.”

In other words: soft robotics can act like extra muscle, helping the wearer carry a load — but only rigid exoskeletons can act like bone, actually holding up the load and transferring its weight off the wearer to the ground. 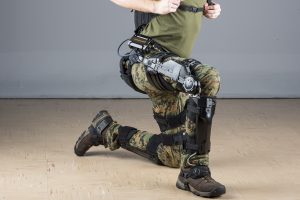 Lockheed Martin’s ONYX exoskeleton, now in Army testing, is a rigid system that could be hybridized with soft robotics for greater flexibility and efficiency.

So Maxwell and his Lockheed colleagues see soft robotics as a complement –not a replacement — for the rigid exoskeletons they’re also developing. When you need to lift very heavy loads for a long time, but not move around much — say, in a shipyard or a supply depot — you can use a purely rigid system, like Lockheed’s stationary FORTIS or Sarcos’ 3-mph Guardian. When you don’t need to carry much, but you need to be nimble, flexible, and light on your feet — like a special ops commando — you can use a purely soft system, like Georgia Tech’s air-powered exoskeleton. For everything in between, you can probably benefit from a combination of rigid and flexible.

Perhaps the most powerful synergy between hard and soft lies in the control systems. Rigid exoskeletons rely on what’s called kinematic control. Basically, as soon as the wearer’s muscles start moving, they push and pull on the exoskeleton, which detects the movement and starts up its own actuators to move in tandem. The problem with this approach is there is always going to be a lag — a period when the wearer has started moving but the exoskeleton hasn’t yet.

On early experimental exoskeletons, like the aptly named HULC, there was so much lag, and therefore so much resistance to the user’s movements, that you were basically wearing a weight-training machine. You quickly wore yourself out fighting the exoskeleton. Lockheed’s newest systems, like Onyx, minimize resistance and increase agility by using sophisticated software to pick up on the wearer’s movements much more quickly and get out of the way as fast as possible. Of course, faster chips and better sensors help as well. 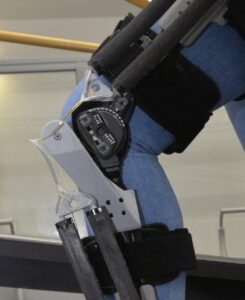 A technology called electromyography (EMG) can “pick up these signals that come from the muscles before a force is generated,” Young explained. It’s only about a tenth-of-a-second beforehand — 100 milliseconds. But that’s enough time for the soft exoskeleton’s software to calculate which muscle is about to move and how much, and then order the actuators to move at the same time and to the same degree. There’s no lag, and therefore no resistance.

While the EMG control system is itself a form of soft robotics, there’s no reason it couldn’t be built into a rigid exoskeleton, making it much more responsive to the wearer’s movements. So Lockheed sees the potential to get the best of both worlds: the responsiveness and agility of a flexible system, combined with the power and strength of a rigid one. That’s the kind of combo that could let a soldier carry heavy weapons and armor, yet still move up a mountainside as nimbly as a Taliban in robes and flip-flops.

“This is really exciting stuff,” Maxwell enthused. Instead of the exoskeleton being a drag on the wearer, he said, “it’s now an extension of the human body.”