Space Architect Is Back! As Wilson Unveils Space Reforms

CORRECTED: I referenced the wrong A5. Corrected below.

SPACE SYMPOSIUM: It’s one of the coolest titles in the US military — space architect!

For a long time, the US military has not had a designated space architect, someone whose main job is to consider our warfighting and intelligence needs and recommend all the satellites and capabilities that are needed. The National Security Space Architect was folded into the National Security Space Office (NSSO) back in 2004, and the NSSO was abolished eight years ago. It was sort of replaced by joint and contractor assignments assigned to the Executive Agent for Space.

But Air Force Secretary Heather Wilson announced Tuesday night there will again be a space architect, one detail among many in a spate of space reforms she announced here. Known as the Chief Architect, we learned this morning it will reside at Space and Missile Systems Center in Los Angeles. Lt. Gen. John Thompson, the SMC commander, told me the office will include his chief technology officer, his chief systems engineer and his chief integrator. 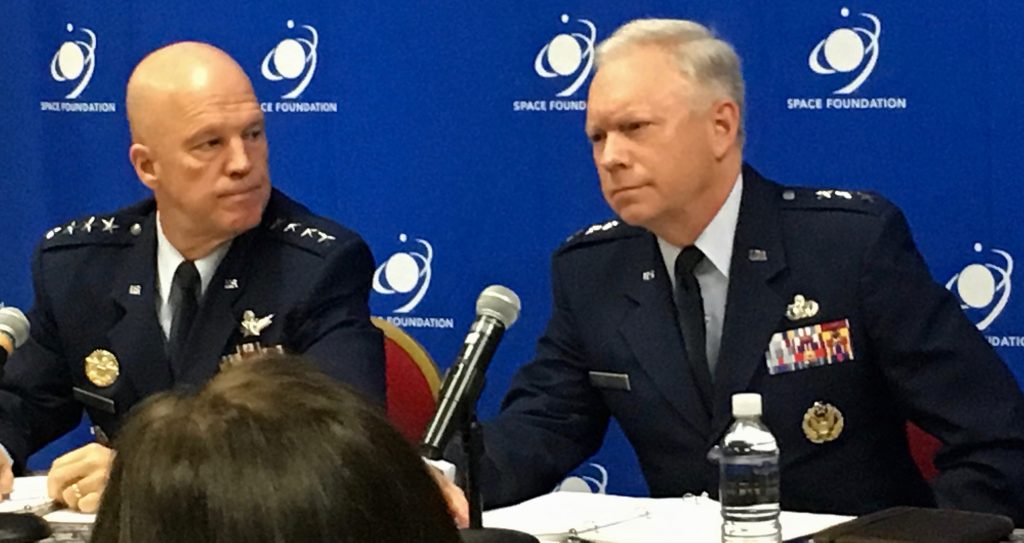 A source very familiar with the old Space Architect and NSSO praised the decision to create the SMC position: “Good that it’s ‘back’. Yes, it’s needed and can help things go faster if done right. Best of all, it’s not in the Pentagon (OSD) and is hosted by the AF! One caution is that it needs to include the other Services and close relations with industry & Allies, all of which is very doable.”

Now there’s an interesting wrinkle to all this. I later grabbed Gen. Jay Raymond, head of Air Force Space Command, for a brief walk in the exhibit hall here and chatted about the space architect. He says he’s got one performing the role now in the person of the A5, Brig Gen John Shaw at AFSPC, the AFSPC/A5/8/9 for strategic Plans, Programs, Requirements and Analysis.

.  The Chief Architect will work, Thompson said. with the Air Force’s Rapid Capabilities Office, the NRO and other intelligence agencies to build an enterprise architecture. If this architect really does the full space portfolio it will also look at ground stations and supporting infrastructure, which are crucial to making satellites useful. More on that later.

A second source, who did not wish to be identified but has decades of senior level experience in the IC and in Air Force space, said putting the architect in SMC — or the Air Force for that matter — is a mistake. It should, this source said, be in the Office of Secretary of Defense so it can be a truly honest broker among the services and more closely coordinate with the intelligence agencies. I mentioned this to Raymond and, not surprisingly, he said it belongs in the Air Force. Service officials have made it a mantra to say that they control 90 percent of US military space capability.

I’ve included the video at the top because it does a surprisingly good job of illustrating the space architecture in its entirety, as well as the threats to it. It was first shown here Tuesday during Gen. Raymon’d s presentation.