In language that very closely echoes US Air Force counterspace operations doctrine, Parley was quick to stress that France was not moving toward an offensive strategy in space. “And here, I want to be precise: active defense is not an offensive strategy, it’s all about self-defense,” she said. “That is, when a hostile act has been detected, characterized and attributed, to be able to respond in an appropriate and proportionate way, in conformity with the principles of international law.” (All translation mine, with help from Google.)

The announcement yesterday by Parley of the new strategy (available on the Ministry’s website for those who read French) was not a surprise. But her call for satellites — perhaps nanosatellites — carrying lasers to “dazzle” hostile spacecraft was.

While France — like the United States — will “reserve the time and place” of any reaction to hostile acts, Parley said, she added that “this may involve the use of powerful lasers deployed from our satellites or from our (future) nanosatellite spy spacecraft” — that is, a constellation of nanosatellites for monitoring the “space” around French satellite constellations.

Such a constellation would be similar in function (although based on much smaller satellites) to the US Geosynchronous Space Situational Awareness Program (GSSAP) constellation. However, as far as we know, GSSAP satellites are not carrying shoot-back lasers.

Parley indicated that the Ministry of Defense (MoD) has been exploring with French defense giant Thales concepts for what she called “fearsome little detectors” that “will be the eyes of our most valuable satellites.” Thales representatives could not be reached for comment before press time.

The lasers, she said, could “dazzle those who would be tempted to approach too close.”

The US has for years been fascinated by the potential for laser weapons based in space — either for ballistic missile defense or for attacking adversary satellites. Indeed, DoD Undersecretary for Research and Engineering Mike Griffin has revived his Reagan era-dream of space-based missile defenses carrying lasers or perhaps even neutral particle beams. However, DoD researchers have been stymied by a myriad technical problems.

While using a laser “up closer and personal” in orbit to “blind” a hostile satellite is theoretically possible for some purposes, space scientists say it would be difficult and require a large satellite with a heavy power source. Many studies over many years have found that while it is again, theoretically, possible to use lasers to shoot down missiles early in their ascent — it would be neither easy nor cheap nor even really solve the problem due to the easy ability of adversaries to fire more missiles.

“Dazzling from accompanying satellites (probably not “nano” satellites unless that definition is very generous) or on-board might stop other slow moving proximity operations satellites from observing their satellite [targets] or to make it hard for them to use lidar for getting really close,” says Laura Grego, an astrophysicist with the Union of Concerned Scientists. Lidar — light detection and ranging sensors — are used to guide spacecraft into docking mechanisms on the International Space Station for example.

However, she continued, “It would be very complicated to try to use an on-board laser to interfere with something fast moving on a cross-orbit or a direct ascent.”

With regard to international law, Parley’s plan to laze satellites that get “too close” — even if technically feasible — would face legal hurdles. For one thing, the Outer Space Treaty (OST) of 1967 prohibits nations from claiming space or celestial bodies such as the Moon as their own. The treaty’s central Article II states: “Outer space, including the moon and other celestial bodies, is not subject to national appropriation by claim of sovereignty, by means of use or occupation, or by any other means.” Thus while a French government satellite itself is national property (indeed, even privately owned satellites are national property under the treaty) the OST does not give a country the right to define the equivalent of territorial waters in space.

Until a new space-based program can be developed, Parley noted that space situational awareness (SSA) is one of the pillars of the French Space Strategy. She explained that France is today one of the few nations with SSA capabilities.

The French Air Force’s GRAVES bistatic radar — which has been in operation since the 1990s and works something like the US Space Fence —  and its associated three tracking tracking antennas called Satam are key parts of the French SSA network. GRAVES is undergoing an update, Parley said, that will extend its tracking range — allowing it to see “objects the size of a shoebox at a distance of 1,500 kilometers.”

France also is looking at upgrading the CNRS and Ariane Group Tarot telescopes used both for SSA in and astronomy in deeper space. Further, she said, the MoD “will seek the services of Ariane Group’s Geotracker network to get more images of Geostationary Orbit.”

In addition, Parley recalled that she had ordered in September that cameras be fitted on the Syracuse military telecommunications satellite for self-defense. Thales Alenia Space and Airbus Defence and Space are building two Syracuse 4 satellites, and a third is planned. 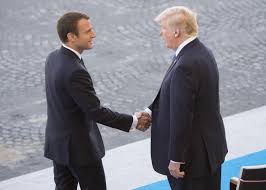 Parley’s release of the French Space Strategy follows the July 13 announcement by President Emmanuel Macron that he had approved the creation of a Space Command, to be stood up by September as a subordinate command to the Air Force. Further, echoing his counterpart President Donald Trump, Macron said that eventually the Air Force would be transformed into an Air and Space Force. The space command is to be initially staffed by 220 personnel and located in Toulouse — incidentally the headquarters of French aerospace giant Airbus.

All things considered, Macron is likely to get his way far sooner than Trump — who has called for a separate Space Force equal to the Air Force and other service departments — as Congress remains highly skeptical of the idea.

Meanwhile, Macron will have to figure out a way to convince his arguably most important counterpart, Angela Merkel — who Politico is reporting is less than happy with the new French strategy. Germany has traditionally been wary of the very idea of warfare in space, but has acquiesced to the idea that it might be necessary in the face of Russian and Chinese actions. NATO is set to officially declare space a warfighting domain at its summit in December.