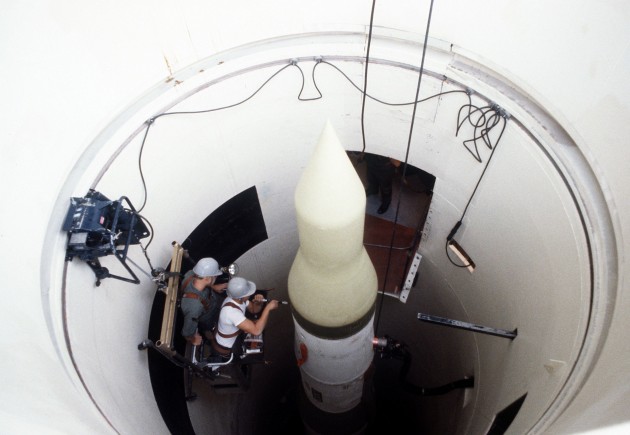 WASHINGTON: I live in a pretty old house and the doors stick sometimes. In summer they expand because of the fabulous DC humidity. Then there’s the whole settling thing, when the house sinks, the door frame warps and the door sticks.

So when I heard the blast doors at Air Force ICBM silos were sticking I was sympathetic, if a bit more concerned. After all, I reasoned, if they are sticking might that affect our ability to launch in the horrible event it might be necessary.

Well, it turns out the doors were sticking. The good news is that would not have affected our ability to launch. The bad news is that they are an important part of our nuclear response.

I sent questions to the Air Force about this. If you want to get some idea how seriously the service now takes stories about the readiness of the nuclear force, you just need to read the exchange below. In years past, I can tell you getting answers about something like this would have been incredibly difficult and probably would have taken weeks — if they responded at all. (Note to Space and Missile Systems Command: learn from these guys.)

Following is the exchange I had with the spokeswoman for Air Force Global Strike Command, Maj. Shelley Laver. It’s self-explanatory.

Q: Is there a problem with sticking ICBM blast doors?

A: ICBM blast doors are 8-ton concrete and steel doors secured with hydraulically operated pins to provide blast protection for the equipment and crews in the launch control center and launch control equipment building. Missile crews noted difficulty in opening the blast doors following a HVAC system replacement at all facilities in 2011. While this was ‘sticking’, differential air pressure sometimes made it difficult to pull open the 8-ton door. The air pressure problem has since been fixed by HVAC system adjustments completed this year, and ‘sticking’ is no longer a problem for opening blast doors.

On a launch facility (LF), there is a 110-ton rolling door that covers the missile and launch tube. This launcher door system has not experienced any problems with sticking or difficulty in opening.

A: There is no longer any difficulty in opening the doors, as the problem has been corrected through the HVAC system modification.

Q: Are there concerns these doors could stop an intended launch?

A: While the problem is now fixed, the problem with blast doors would not affect the ability to launch.

Q: Have work arounds been found?

A: System engineers devised a technical solution and modification that balanced the air flow in the facility, and restored normal blast door opening for personnel.

Q: I also heard this is being caused by the pinch of OM funding caused by sequestration. The base hasn’t gotten enough funds to get this fixed. True? Sort of true?

A: Funding was not, and is not currently, a limitation concerning ICBM blast doors or launcher closure door maintenance. [Editors’ note: our source on this says tight operational funding did play a role in delaying these repairs. I’m willing to give the Air Force the benefit of the doubt.]