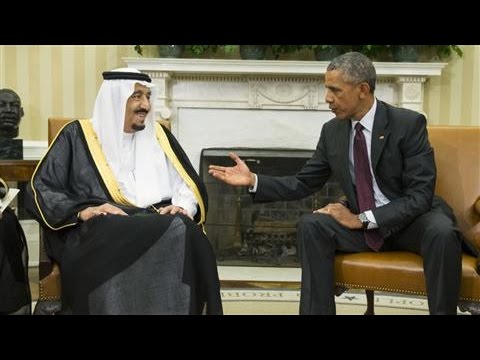 When Air Force One touches down at King Khalid International Airport on Wednesday, President Obama will enter a Middle East figuratively as well as literally on fire. In the current revolutionary period, the region is beset by multiple cross-cutting wars, the ongoing disintegration of at least four states (Syria, Iraq, Libya and Yemen), and the ascendance of familiar foes in the form of the Islamic State of Iraq and Syria (Daesh), and the theocratic mullahs of Iran. When they sit at the negotiating table for what should be a war council between venerable allies, Barack Obama and Saudi King Salman will stare across a vast gulf of distrust and suspicion.

The Obama administration is openly frustrated with Saudi Arabia’s sectarian worldview and zero-sum mindset. As de facto leader of the Sunni monarchies, the Saudis perceive any accommodation between the United States and Shi’ite Iran as a setback, and thus a betrayal. That includes the recently implemented international agreement to restrain Tehran’s suspected nuclear weapons program in exchange for the lifting of sanctions. The naked tribalism that defines the competition between the Saudis and Iranians long ago convinced the Obama administration that it should resist getting further drawn into the current Middle East morass. In a series of recent, remarkably frank interviews with Jeffrey Goldberg of The Atlantic, Obama and his top aides complain that Saudi Arabia continues to export its fundamentalist and intolerant Wahhabi version of Islam around the globe, where it is eagerly embraced by extremists.

The administration also clearly perceives a strategic rebalancing occurring and is uninterested using military force to tip the scales towards its long-time allies. “The competition between the Saudis and the Iranians – which has helped to feed proxy wars and chaos in Syria and Iraq and Yemen – requires us to say to our friends as well as to the Iranians that they need to find an effective way to share the neighborhood and institute some sort of cold peace,” Obama told The Atlantic. “An approach that said to our friends, ‘You are right, Iran is the source of all problems, and we will support you in dealing with Iran,’ would essentially mean that these sectarian conflicts continue to rage…and we would have to come in and use our military power to settle scores. And that would be in the interest neither of the United States nor of the Middle East.”

From the Saudi’s perspective, Obama is dangerously complacent about Iran’s anti-American agenda and dreams of regional hegemony. The Saudis believe Obama’s administration has executed a steady disengagement from the Middle East, beginning with a premature withdrawal of all U.S. troops from Iraq in 2011; continuing with its failure to enforce its own “red line” against Syrian dictator Bashar al-Assad’s use of chemical weapons in 2013; and culminating with the 2015 Iran nuclear deal. That perceived disengagement has created a power vacuum into which have flowed the likes of Iran, Daesh and Russia, forcing traditional U.S. allies like Saudi Arabia and members of the Gulf Cooperation Council to fend for themselves against existential threats.

“There is a sort of civilizational aspect to the conflict between Iran, which is Shiite and Persian, and the Sunni Arabs of Saudi Arabia, and it makes both countries feel enduringly insecure about each other,” said Jonathan Alterman, director of the Middle East Program at the Center for Strategic and International Studies. Through the destabilizing violence of its Republican Guards Quds Force, and its regional proxies such as Lebanese Hezbollah, the Houthis of Yemen and Shiite militias in Iraq, Tehran already wields undue influence in Damascus, Beirut, Sanna and Baghdad.

“Saudi Arabia correctly surmises that the Obama administration is willing to stand by and watch a rebalancing take place that results in Iran growing more powerful, and Saudi Arabia growing relatively weaker,” Alterman said in an interview. “That raises a legitimate question of what designs a more powerful Iran has on the region. To me the Obama administration’s largely ‘hands off’ answer to that question and the current crises have only produced more destabilizing proxy wars, and it has fanned extremism in the region that undermines U.S. security interests.”

Of course, in a land of shifting alliances and infinite tribal, ethnic and sectarian complexity, no black-and-white narrative can fully explain events or motives. What looks like a policy of U.S. disengagement from the region to the Saudis, for instance, was to the Obama administration a series of perfectly defensible tactical maneuvers. The United States pulled its troops out of Iraq but only after a democratically-elected Iraqi government led by a Shiite prime minister showed little appetite for having them stay. The White House team figured the American public had elected Obama in part on his promise to end the war. When Daesh was in danger of overrunning Iraq in the summer of 2014, Obama swallowed his reluctance and ordered U.S. forces back into the country to backstop Baghdad’s tottering government.

When the Assad regime killed more than 1,400 Syrian people with nerve gas in 2013 and the administration declared its “red line” against the use of chemical weapons, Obama realized that he would not have the support of key U.S. allies like Great Britain — nor the U.S. Congress. After the war in Iraq and operation in Libya, the White House and many senior U.S. military leaders were extremely reluctant to become involved in another potential Mid-East quagmire. They settled instead for a Russia-brokered deal that forced Assad to ship the regime’s chemical weapons out of the country.

While critics cast the Iranian nuclear deal as part of an ill-advised rapprochement, Obama administration officials insist it was never about opening a new, more benign era in U.S.-Iranian relations, but rather, as National Security Adviser Susan Rice told The Atlantic, simply about making “a dangerous country substantially less dangerous.”

“We want to both prevent Iran from developing a nuclear weapon, and to contain its destabilizing activities in the region, and sometimes there is a tension between those goals,” said Philip Gordon, a former senior Obama Administration official who helped negotiate the Iran deal. Administration officials acknowledge that accomplishing the first goal, he said, made resources available to Iran to do other things the United States and its allies oppose.

“But I challenge the notion that the United States is now positioned equidistant between Iran and our allies in the region,” said Gordon, speaking recently at the Council on Foreign Relations. The United States doesn’t trade with or invest in Iran, he noted, and continues to sanction many Iranian entities for supporting terrorists, or other infractions. In contrast, he notes that the United States provides enormous defense support to Middle Eastern allies, including intelligence, billions of dollars’ worth of U.S. weapons, and keeping the Fifth Fleet and roughly 36,000 service members forward deployed there. “Notwithstanding our qualms about the operation, we also continue to support Saudi military operations in Yemen. We are likewise working with our Gulf partners to support the rebel opposition in Syria. So I just don’t understand this notion that the United States isn’t doing anything to stand up to and help contain Iran.”

However, President Obama’s public criticism of Saudi Arabia, the White House’s body language rejecting deepening engagement in Middle Eastern crises, and the State Department’s well-known desire to focus  on the “pivot to Asia” all sharpen the narrative of strategic disengagement. Every time the United States fails to respond forcefully when Iran is caught firing off a long-range missile in apparent violation of United Nations resolutions, or shipping another cache of arms to Houthi militias in Yemen or Hezbollah terrorists in Lebanon, it further alarms regional allies.

Nicholas Burns, director of the Future of Diplomacy Project at Harvard’s Kennedy School of Government, is the former number three official at the State Department. He supported the Iran nuclear deal, commends Secretary of State John Kerry’s activist diplomacy to reach a ceasefire in the Syrian war, and supports ongoing U.S. military operations against ISIS.

“But the Obama administration is acting tactically in each of those cases, without articulating a regional strategy that our allies can understand and rally around. And for that reason I think U.S. relations with our allies in the region are at a modern low point,” Burns told me. The United States shouldn’t be comfortable with a rebalancing that entails an expansion of Iranian power in the Middle East, he insisted, nor should President Obama publicly suggest that the Saudis learn to ‘share the region’ with an Iran that is acting as a destabilizing force. “If there is a struggle between our traditional allies and Iran, which continues to be a very malicious actor in the region, then we should be on the side of the Gulf Arabs. As it is, I think it will take a decade or more to repair those alliance relationships. So with great respect for the Obama administration, I think their Middle East policy is in need of strategic repair.”

President Obama’s trip to Saudi Arabia may indicate he recognizes that strategic repair is in order. What’s needed, many experts believe, is clear articulation of a strategy for pushing back against Iranian aggression. Such a strategy might include clearer plans to enforce the terms of the nuclear deal and penalize Tehran for any transgressions or outright cheating, and further sanctions against Iranian individuals and entities responsible for shipping weapons to proxies in the region. Military exercises with regional partners would almost certainly be welcomed, as would deployments of more missile defense systems in response to Iranian missile tests.

“What’s most needed is multilateral security cooperation with our allies in the region to present Iran with a more coherent, united front,” Michael Singh, managing director of the Washington Institute for Near East Policy, said recently at the Council on Foreign Relations. “Iran is meddling all over the region, and neither I nor our allies have seen a U.S. strategy of any significance to counter that meddling. As opposed to accepting a rebalancing in the region that favors Iran, every time Tehran acts aggressively against our interests there should be a response from the United States and our allies.”