Posted by Murielle Delaporte on January 31, 2019 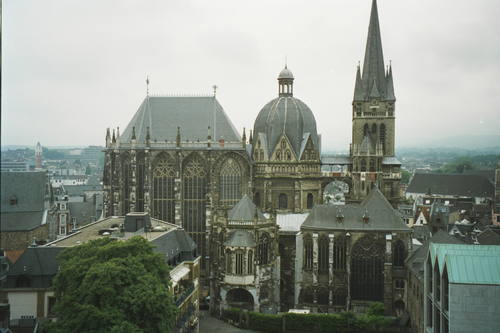 Aachen Cathedral, also known as the Cathedral of Aix-la-Chapelle. Charlemagne is buried there.

The Aachen Treaty is the fifth treaty signed in the city where Charlemagne was born and they have all shared a common thread of boosting European peace and integration.

The first one, signed in 1668 in Aachen (Aix-la-Chapelle in French), put an end to the War of Devolution between France and Spain; the second, in 1748, put an end to the War of Austrian Succession; the third established the borders between the Netherlands and Prussia in 1816; the fourth, the so-called Congrès d’Aix-la-Chapelle – followed in 1818 the Vienna Treaty; and finally, on Jan. 22, to be precise, France and Germany signed a Treaty “on Franco-German Cooperation and Integration”.

It is not clear yet whether this treaty will echo through history the same way its predecessors did, but it shares the same aspirations: to counter instability and divisions in Europe. The goal of the treaty: to boost the old Paris-Berlin engine that has powered European integration ever since the two countries signed the Coal and Steel Treaty (formally known as the Treaty of Paris) that underpins the European Union. President Macron’s agenda to shore up Europe has been clear, in his speech at the Sorbonne in 2017 and his initial (and very brief) appointment of Sylvie Goulard, a European MP known for her support for strong Franco-German ties, as Minister of defense, clearly stated.

But that agenda has been crumbling under the weight of domestic tensions on both sides of the border, with German Chancelor Angela Merckel losing her hold on the coalition in power in Germany and a growing grassroot’s opposition in France, the Yellow Vests movement.

So what will the impact of this treaty likely be?

Upcoming European elections tends to make any shorter-term assessment difficult. Antagonistic voices are being heard loud and clear as the extreme right and the extreme left take advantage of both the tearing apart of the classic political parties and system and the information age. Current statistics forecast 35 percent support for the CDU and 23.5 percent for President Macron’s party, while the French (ex-)National Front ranks second.

In the longer run though, three aspects of the 2019 Aachen Treaty could reinforce European collective defense in a broader and constructive sense, if not propel actual force integration.

“Jointly invest to fill capability gaps, therefore enhancing the European Union and the North Atlantic Alliance” (Article 4 §2) This is the spirit of the 1960’s with the Transall  C160 legacy. Working towards joint tanks, artillery and a Future Combat Air System currently benefits from a strong bilateral political support, vision and financial commitment, which has already redefined the industrial defense landscape in Europe

“Further reinforce the cooperation between the two armed forces (…) in order to operate joint deployments” (Article 4 § 3) and create a “joint unit meant for stabilization operations in third party countries. (Article 6). Past initiatives such as the Franco-German Brigade have been challenged by radically different post–WWII operational traditions. While French forces have kept their expeditionary legacy,  German forces have been reluctant to go beyond peacekeeping missions – notwithstanding a fundamentally different political system authorizing military intervention (in France the order may come from the President while in Germany the Bundestag has to approve it, hence very different timelines). This has changed over the past few years with a growing German military presence in Niger, for instance, as part of the war against terrorism in Sahel. A stronger cooperation to tighten a partnership between Europe and Africa (Article 7) is also part of the effort to enhance security in Europe as a whole, with immigration being such a divisive issue on the old continent as well.

“Establishing a common culture” (Article 4 § 3) is a leitmotif the current German and French leaderships like to chant in order to encourage a unified Europe. Many Europeans are critical of what is perceived as this “Paris-Berlin axis” and propose other types of European models and alliances (e.g. the New Hanseatic League or the “Italo-Polish axis” advocated by Italian leader Matteo Salvini). However, the Aachen Treaty, which promotes bilingualism on the Franco-German border (Article 5) and joint Franco-German officials serving in executive and legislative frameworks, could be a tool to formalize the development of a generation genuinely European at heart, as well as to be an embryo for a joint European stance in multilateral bodies, such as the United Nations (Article 8).

There may be still a long way to go to make true John F. Kennedy’s dream to “look forward to a Europe united and strong — speaking with a common voice — acting with a common will — a world power capable of meeting world problems as a full and equal partner.”