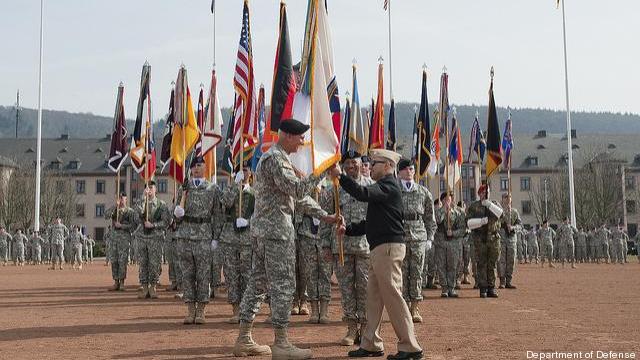 Washington: American troops stationed in Europe may be coming home much sooner than the White House or the Pentagon had initially expected, the top U.S. commanding officer in the region said.

European Command leaders have submitted recommendations that would mean an Army Brigade Combat Team would be pulled from the region much sooner than originally envisioned, according to command chief Lt. Gen. Mark Hertling.

The three-star general did not go into specifics on which BCTs in the command were being considered since the recommendations were still under review by DoD. That said, Hertling noted that troop withdrawal could happen before the 2015 deadline set by DoD and the White House.

There are just over 41,000 American troops attached to European Command, Hertling said.

That 2015 deadline is part of an overall plan, initiated under Defense Secretary Robert Gates, to bring the overall U.S. military presence in Europe down to three BCTs. Gates made restructuring of U.S. forces in Europe one of the top priorities in the Pentagon’s most recent Global Posture Review.

But whenever that Army BCT does end up stateside, Hertling hinted that their departure may be the last force cut coming from his command.

Elements of both the Democratic and Republican parties doubt the need for a substantial U.S. presence in Europe and many other parts of the world. They are not alone. Gates and others still inside the Pentagon have criticized the military presence in Europe as a relic of the department’s Cold War days.

On top of questioning the strategic relevance of forward-deployed troops, many on the Hill are openly wondering if DoD can afford to maintain a large U.S. force in Europe. New Army Chief of Staff Gen. Ray Odierno and other top service leaders are asking themselves those same tough questions about the future of European Command while keeping “everything on the table,” Hertling said.

But Hertling said the U.S. presence in Europe remains a sound investment. The command continues to play a major role in U.S. military operations, especially in the wars in Iraq and Afghanistan, Hertling said. European Command was the main jumping off point for American and coalition forces heading to Southwest Asia. Of course, they also played an important role in supporting the Libyan operations.

With those conflicts now winding down, command officials have been working closely with their counterparts in NATO to create a “post-ISAF” force, he said, referring to the International Security Assistance Force moniker U.S. and coalition troops have been working under in Afghanistan.

That future force, he added, will be heavily invested in partner nation engagement operations with NATO — and more importantly non-NATO — countries in the region, he said.

That work, Hertling said, will pay dividends as the command looks to tackle a wide array of threats, from narcotics trafficking to terrorism, in the region.