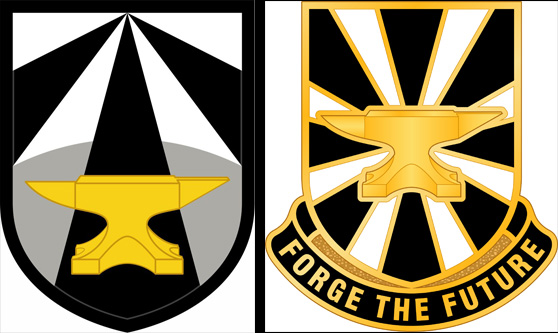 “The nation that will insist upon drawing a broad line of demarcation between the fighting man and the thinking man is liable to find its fighting done by fools and its thinking by cowards.” — Sir Francis Butler on Maj. Gen. Charles Gordon

“We’ve done concepts for many years and, frankly, the Army hasn’t changed much,” admitted the three-star chief of the Army’s in-house think tank on future war. But on Friday, when the Army officially put its futurists — formerly ARCIC, now the Futures & Concepts Center — under the same roof as its scientists, engineers, and program managers, the notoriously hidebound service aimed to break down the barrier between thinking about the future force and building it. 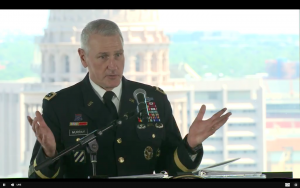 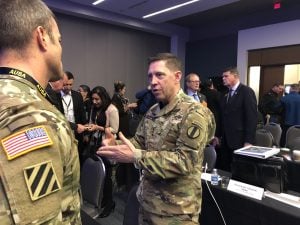 “You can’t just hope you get there,” Lt. Gen. Eric Wesley continued. “You’ve got to have a mechanism.”

“If I don’t have Gen. Wesley identifying the problem we’re trying to solve, we’re going to come up with a lot of solutions in search of a problem,” said Wesley’s new boss, the head of Army Futures Command, Gen. John “Mike” Murray. Now, with Wesley & co.’s latest draft of the rapidly evolving Multi-Domain Operations concept in hand, Murray said, “that concept becomes the foundation of everything else we do.”

Next week, Murray continued, he’ll bring together Wesley and all his other key subordinates in Futures Command — including ones that haven’t officially come onboard yet, notably the R&D labs — to work out “the benchmarks for the next 12 to 18 months about where we want to be.”

Now, the Army can’t do Multi-Domain Operations today. (If it could, the futurists would be working on the next thing instead). MDO will require not only new tactics, training, and technology for the Army itself, but — as per its name — unprecedented coordination among all four armed services in all five domains, namely land, sea, air, space, and cyberspace. 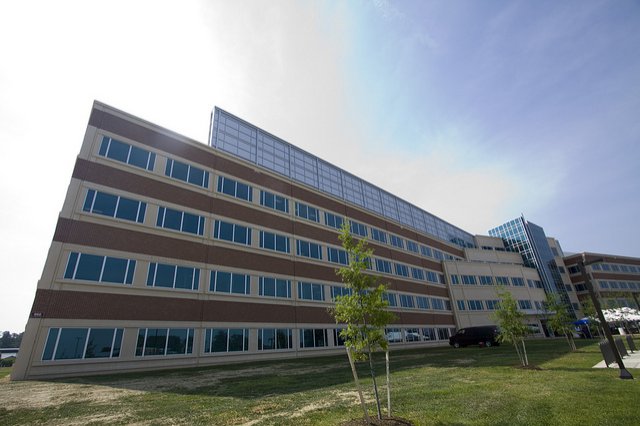 Why does all this require a new organization? Part of it is that Training & Doctrine Command is just too big to focus on the future and do all its other jobs: recruiting, basic and advanced individual training, ongoing professional education for NCOs and officers, the writing of field manuals and doctrine.

“Gen. Townsend’s a great guy,” Murray said of the TRADOC commander, “but he has a thousand things on his plate.” By moving the futurists to Army Futures Command, Murray argues, they’ll get a four-star’s undivided attention in a way they never could at TRADOC. 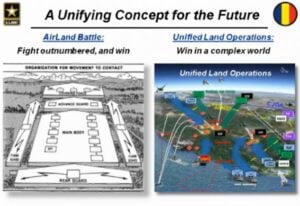 With this reorganization, the biggest in 40 years, the Army’s hoping to recapture the magic of the last time it revolutionized itself, after the demoralizing disaster of Vietnam. Back in 1973, the Army split the sprawling Continental Army Command (CONARC) into a new Forces Command (FORSCOM) to oversee all operational forces in the US — basically, preparing units to deploy abroad — and a Training & Doctrine Command (TRADOC) to oversee the institutional side — basically, preparing individuals to join units. Those reformed organizations helped create the joint Army-Air Force concept for taking on the Soviet Union, AirLand Battle, which in turn provided the blueprint for defeating Iraq in two conventional wars.

This time, after 17 years of guerrilla warfare in Afghanistan and Iraq, the Army is splitting organizations again. The new reform hives off the part of TRADOC that thinks about the future full-time — formerly Army Capabilities Integration Center (ARCIC), now Futures & Concepts Center — from the parts that prepare the Army of today. (A few small splinters of ARCIC will remain in TRADOC: Foreign liaison officers from allied and friendly nations, Wesley said, and something called the Force Development Team, which works on near-term updates).

In much the same way, the Army Materiel Command (AMC) is giving up one of its subordinate organizations, Research, Development, & Engineering Command (RDECOM), which will join Army Futures Command under the new name of Combat Capabilities Development Command. The remainder of AMC, like the remainder of TRADOC, will focus on supporting the Army of today, in AMC’s case through fielding and sustainment of equipment and supplies.

The third and trickiest piece of Army Futures Command is the Army’s acquisition programs. By law, program managers must report to Service Acquisition Executive, a Senate-confirmed civilian, assistant secretary Bruce Jette. So they can’t be put under Gen. Murray’s direct orders as an official part of Futures Command. However, Maj. Gen. Robert Marion, Jette’s uniformed deputy for acquisition & systems management, will also run Futures Command’s Combat Systems Directorate, to which the program managers will have a “dotted line” reporting relationship, so coordination will hopefully be close and constant. 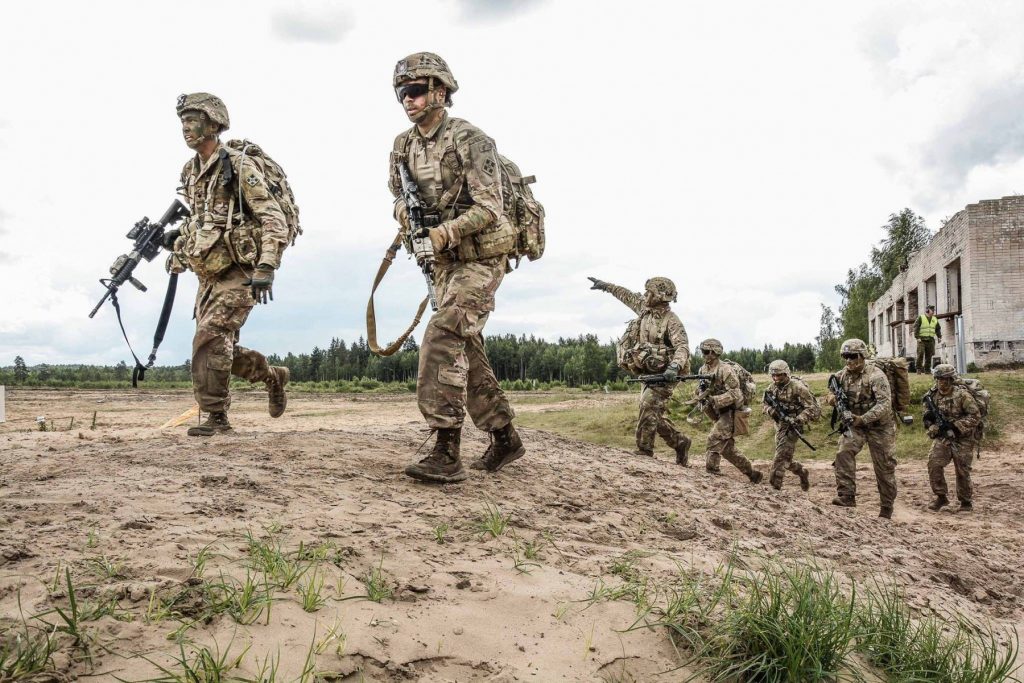 US Army soldiers participate in an international infantry competition in Lithuania

Moving Ahead, In The Same Place

If all this reorganization actually works, then Army Futures Command will act as a streamlined pipeline from concepts — brainstorming what the Army should do in the future — to R&D — developing the technologies to realize the concepts — to procurement — actually building and buying equipment that incorporates those technologies. That said, you can’t org chart your way to the future. Army Futures Command will still need to work together closely with the other four-star commands, which train the force (TRADOC), sustain it (AMC), and keep it ready (FORSCOM).

That’s something the generals have promised to do. 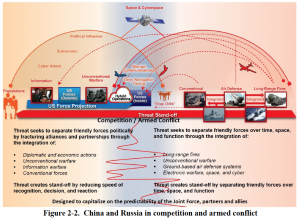 “Gen. Wesley (is) reaching out to FORSCOM for good ideas; I spend a lot of time with operational units,” Murray said. “I’ve got a plan in my mind – it’s not executed yet – linking young soldiers up with young developers in specific fields, to identify what they think the problem are that ought to be solved.”

Murray is even thrashing out an idea — “I really even haven’t proposed it to anybody,” he said — for the commanders of TRADOC, AMC, and FORSCOM to be part of a “board of directors” for Army Futures Command. The other members of this board, he said, would be the “Army senior leaders,” a phrase he didn’t define but which traditionally refers to the Secretary, Undersecretary, Chief of Staff, and Vice-Chief. It’s these two sets of leaders — one in DC, one outside — that have come together to shape the last Army budget, opening up a process once closely guarded inside the Pentagon.

What’s more, while ARCIC is being renamed and will now report to Army Futures Command, its people aren’t physically moving. Yes, Army Futures Command is setting up its new HQ in Austin, but that’ll be a small organization — under 500 people — overseeing subordinate commands that will stay where they are across the country.

So ARCIC’s outstations — the Capabilities Development Directorates — will remain where in place at the Army’s centers for aviation, ground combat, artillery, logistics, etc., Wesley said. And ARCIC HQ, now the Futures & Concepts Center, remains at Fort Eustis, Va., right next to TRADOC headquarters and a short drive away from counterpart organizations in other services: Air Combat Command, which handles much of the future-concepts work for the Air Force; Marine Corps Combat Development Command at Quantico, which hosted a major multi-domain conference this summer; and Navy Fleet Forces Command.

“The location is perfect,” Murray said.

Edited 11:30 pm to correct identity of the official dual-hatted between the Army’s civilian-led acquisitions secretariat and Army Futures Command.