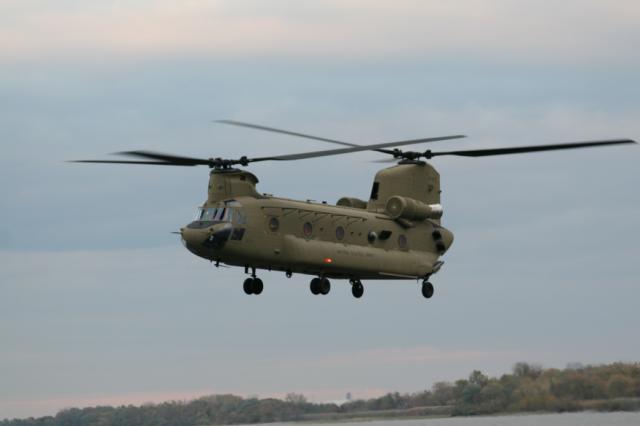 NASHVILLE: The fate of the CH-47F Chinook — the latest model of the iconic heavy lift helicopter that first saw service in Vietnam — depends on three facts:

The decision to upgrade the CH-47 to carry heavier cargo, Army Secretary Mark Esper said today, was directly linked to the decision to replace the Humvee with the heavier and better protected Joint Light Tactical Vehicle (JLTV). But both those decisions, he said, were driven by the demands of counterinsurgency, especially in Afghanistan, and were made before the Pentagon refocused on Russia and China. 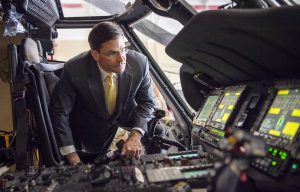 “These decisions were made before the National Defense Strategy came out, before Secretary Mattis issued his guidance,” Esper told reporters at the Pentagon. “Why the Block IIs? Gotta carry a heavier payload, gotta fly higher and hotter [i.e. over Afghan mountains in the summer]. What was the payload? JLTV. What drove the JLTV? IEDs in Afghanistan and Iraq.”

“They were in many ways designed for a different conflict,” Esper said. “[That] doesn’t mean we won’t use them in future conflicts, but now my emphasis has to be on rebuilding my armor, rebuilding my fighting vehicles, having aircraft that can penetrate Russian and Chinese air defenses [i.e. Future Vertical Lift]. We’re in this transition period and some folks are caught in that transition.”

Secretary Esper sounds like his mind is made up. Army aviators are more ambivalent — and Boeing is making its case to Congress. 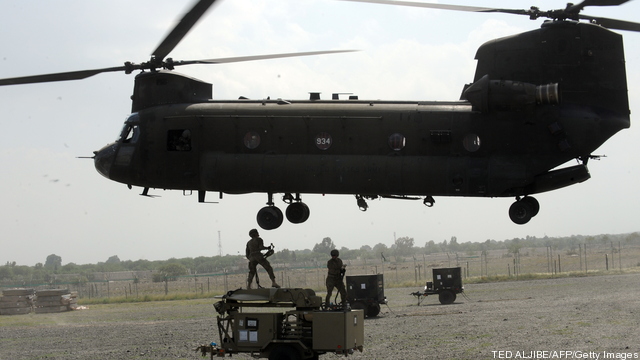 “We have discussed it with Boeing, [and] we want to work closely with industry to maintain the industrial base so we can keep those options open,” the Army’s senior aviator, Gen. McConville, told reporters this morning at the Army Aviation Association of America conference here. “I think in two or three years we’ll have a better idea of where we are as far as developing the two [Future Vertical Lift] aircraft,” particularly the Future Long-Range Assault Aircraft.

FLRAA is primarily a replacement for the UH-60 Black Hawk, but “it may replace some of the CH-47s,” McConville said. For some missions the Chinook does today, he said, “maybe we don’t need as big of an aircraft to do that.” 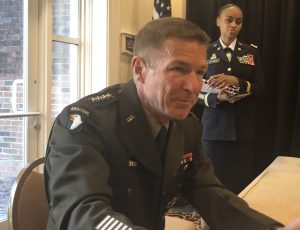 Gen. James McConville, in his new “Army Green” uniform, at Quad-A in Nashville

McConville didn’t specify which missions he meant, but my best guess is he’s referring to so-called “high/hot” missions. In certain conditions, especially over Afghan mountains during summer, the air gets so thin that the UH-60 simply can’t go high enough. That forces the Army to use the much larger and more powerful Chinook for missions that would normally be done by smaller aircraft. The FLRAA should have better high altitude performance than the UH-60, so it could take on some of these Chinook missions.

That said, the Future Long-Range Assault Aircraft can’t replace Chinook in its core competency as a heavy lift transport. That’s because FLRAA will carry 12 fully loaded infantry or up to five tons of cargo, while a Chinook can carry dozens of troops or 10-plus tons of cargo, depending on the configuration.

“It’s an incredible aircraft,” Gen. McConville said of the CH-47 in his address to the Army aviation conference. “It’s also one of the youngest aircraft in the fleet.” 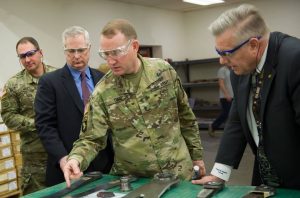 That’s because the current force is made up of CH-47F Block I aircraft: The first was built in 2004 and the last is scheduled for delivery in 2020. Now, even if the Army doesn’t upgrade these aircraft to Block II, it’ll still have to overhaul them at some point, to some degree, to keep them in service. (At one point, the Army was going to keep CH-47s for a century). But that’s a lot less urgent than the Army’s other aviation shortfalls, like the complete lack of a dedicated scout aircraft.

So the Army is moving rapidly on Future Vertical Lift — both the FLRAA transport and the FARA scout — while deferring a decision on CH-47F Block II, explained the Army’s Program Executive Officer for Aviation, Brig. Gen. Thomas Todd. “Hopefully,” Todd told the conference, “the Army will see fit at some point down the road have us continue with the F model.”

The problem is that “some point” can’t be too far down the road, or the option to build the new aircraft will be gone. 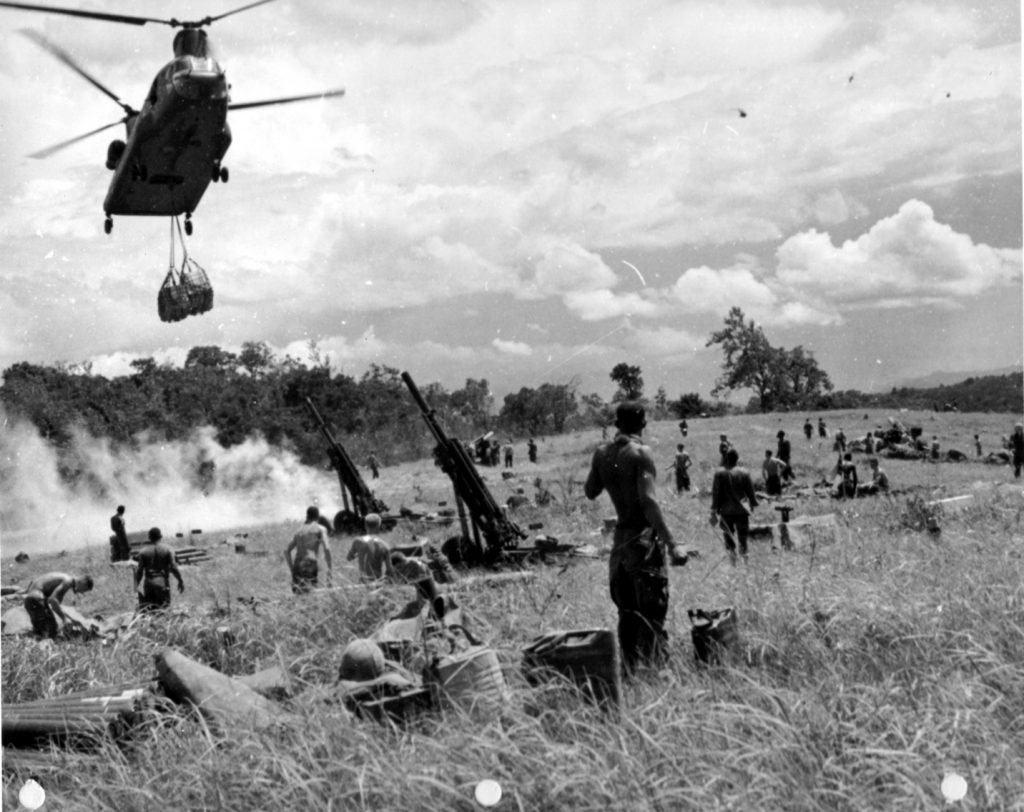 The Army does want to buy the Block II upgrade for the Special Operations version of the Chinook, the MH-47G. It still plans to purchase 69 of those aircraft, with the first to be delivered next year. There are also international orders for Chinooks — most recently 17 aircraft for Spain — and the company is pursuing more contracts in Germany, Israel, and elsewhere. Combined, Boeing officials said, these US and foreign orders would sustain production through the trough when CH-47F Block I production ramped down (ending next year) and CH-47F Block II ramped up.

But for now, at least, the Army has cut production of CH-47F Block II aircraft to just three test aircraft. The plan had been to build 473. There’s no way foreign customers or special operators can make up for a cut that deep. 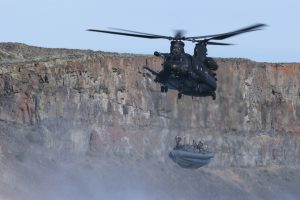 “This is a production line that depends heavily on US Army production,” Boeing exec Randy Rotte told reporters this morning. The company is currently finishing up the last order of CH-47F Block I, and if Block II doesn’t follow on schedule, Boeing and its suppliers will lose efficiencies of scale. That could drive up the cost of both the special ops MH-47Gs and of spare parts for all CH-47 models.

So what does Boeing want? First, there’s the $28 million in 2020 funding originally planned to buy long-lead items to prepare for CH-47F Block II production, funding the Army cut in its latest budget plan. “We’re hoping that gets restored,” said Chuck Dabundo, Boeing’s program manager, “and we’re hoping that the budget will ramp up for Block II F” in the outyears. “We have told our story on Capitol Hill,” Dabundo added.

Finding $28 million in the Army’s 2020 budget of $182 billion doesn’t sound too hard. But, of course, that’s a tiny fraction of the money at stake over multiple years. If Congress restored the $28 million long-lead funding in ’20, would it then feel locked in to funding actual production later, a much larger expense? Or would legislators see the $28 million as the cost of keeping their options open one more year — keeping Boeing on retainer, as it were — and be willing to write it off if the Army decided it really can’t afford the CH-47F Block II?

That’s what the Hill will have to decide over the next few months.