ARLINGTON: With House and Senate appropriators still at odds over funding a new icebreaker in 2019, the Coast Guard is hoping a new name — ‘Polar Security Cutter’ — and a clearer emphasis on national security missions will help convince the House to fund the ship.

“In the past, we’ve talked about them as heavy icebreakers,” the new Coast Guard commandant, Adm. Karl Schultz, told me after a speech to Friday’s Military Reporters & Editors conference. (He took over from Adm. Paul Zukunft in June). But that didn’t adequately distinguish the new design from “yesteryear’s heavy icebreaker that we’ve hung onto for decades,” Schultz told me frankly, “(so) one of the things that we did early in my tenure was we changed (it to) Polar Security Cutter as we were trying to get the funds from the Congress, from our own department, the administration.” 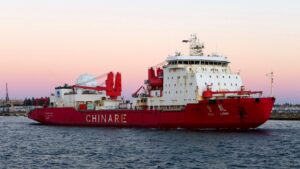 “When you’re an agency that resides in the Department of Homeland Security, you need to think about how your capabilities align under that umbrella,” Schultz said. With Russian and even Chinese activity on the rise as the ice shrinks, he said, “the Arctic is an emerging space that’s about national security.”

The new icebreakers will even have space, weight and power set aside for armaments such as cruise missiles, just in case of a new and colder war, although there’s no plan to actually arm them.

“I can tell you, right now, (for) the current plans on this first Polar Security Cutter that we’re hoping to award in ’19, armament is not part of that discussion,” Schultz told me. “That’s not where my head is here in 2018. We’re looking at the Arctic as peaceful, cooperative, collaborative… but to be frank, it’s a competitive space as well.”

The president’s request for fiscal year 2019 included $750 million to replace the 42-year-old Polar Star, the nation’s only heavy icebreaker capable of year-round operations in both Arctic and Antarctic. The newer and smaller Healy can only break thinner ice, Schultz told me, so it’s limited in its Arctic operations and rarely ventures to the Antarctic at all. Instead, the increasingly creaky Polar Star must make the annual run to open supply routes to McMurdo research station.

In fact, Adm. Schultz told the MRE conference, the icebreaker funded in 2019 will have to spend a lot of time in the Antarctic. “It’ll be the second hull that will enable us to push more… presence up north in the Arctic,” he said, “(because) it’ll actually be working full time up there.”

All told, the Coast Guard says it needs at least three new heavy icebreakers and three new mediums. The National Academy of Sciences, however, estimates that building six heavies would be cheaper than developing two different designs.

The Senate appropriations committee approved the $750 million, but their House counterparts axed it in favor of building President Trump’s vaunted wall along the southern border. Currently, with fiscal year 2019 almost a month old and the Coast Guard, like much of government, still operating under a stopgap Continuing Resolution, the full House and Senate haven’t even passed their respective bills, let alone taken them to conference to resolve the differences.

The Defense Department got its 2019 funding on time this September — for the first time in nine years — but the Coast Guard isn’t part of the Pentagon. Instead, it’s an armed service nestled in the Department of Homeland Security. That means it’s consistently left behind by bipartisan pushes to keep defense funds flowing. It can also get caught up in budget hawks’ efforts to cut non-defense spending, as when the Trump Administration briefly proposed a $1.3 billion cut for 2018. 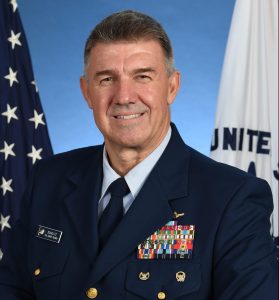 In his seven years working legislative affairs, he’s found Congress appreciates the Coast Guard “almost to a member in both chambers,” Adm. Schultz said. The problem? “We do sit in that discretionary, non-defense part of the budget, so we’re competing with a lot of national priorities,” he said. “We have an array of 11 statutory missions, so it’s not an easy three-bullet elevator pitch.”

And while the Coast Guard routinely saves voters’ lives, with many Alaskans in particular dependent on the service to get them to emergency medical care, a lot of congressional districts are, well, inland: “We don’t rescue people from land-based locations,” Schultz said.

In recent years, the Coast Guard has had remarkable success in securing shipbuilding funds, with its annual procurement budget breaking $2 billion for the first time in 2018. Schultz sounds cautiously optimistic that modernization money will stay above $2 billion in future, allowing the service to recapitalize not only a fleet of aging cutters but also obsolescent aircraft like the MH-65 rescue helicopter. 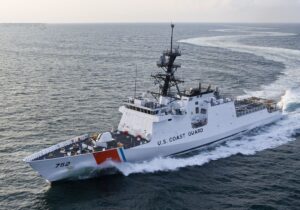 “Where we haven’t been as successful is on the operating side of the budget,” Schultz said. “When you tie the building of a National Security Cutter, which happens at HII in Mississippi, (for example) to former Senator Cochran’s congressional (role) as a senior appropriator, you have momentum…. On the operating side, you really can’t tie that to an industry base in a state.”

In fact, Schultz said said, while the Coast Guard has gotten $340 million in “defense operations” every year since 2002, the actual cost has risen to over a billion. Overall, Coast Guard operations and sustainment funding rose four percent in 2018 — less than half the comparable figure for the Defense Department — and will rise only two percent in 2019 — once the budget passes. Schultz says the service needs about five percent growth to catch up with demand.