You Gonna Buy That Or What? Industry, Army Fight To Fix NIE 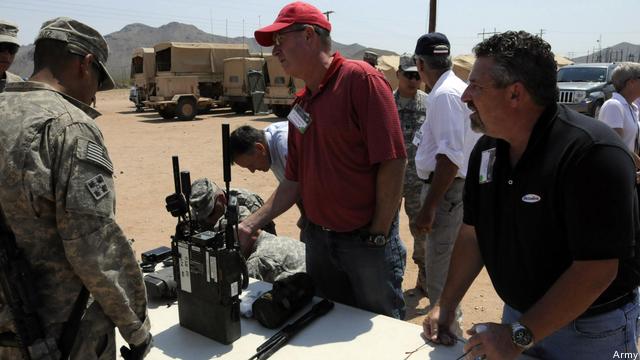 FORT LAUDERDALE: It’s unnerving when you learn your program’s fate from the small print in a presenter’s PowerPoint slides. But that’s how difficult government-industry communications can get in the Army’s ambitious attempt to inject innovative technology into its cumbersome procurement process, the twice-yearly Network Integration Evaluations.

“A question we’ve been asked many times over: ‘Have you bought anything out of the NIE?’ Yes, we have,” said Maj. Gen. Harold Greene, deputy to the Army’s Assistant Secretary for Acquisition, on the second day of the Association of the US Army‘s annual winter conference here in Florida. Up on the screen flashed a list of 30 NIE-tested technologies that the Army was procuring, from massive programs like WIN-T (Warfighter Information Network – Tactical) from General Dynamics to “Tactical Vision” mission planning software from a 30-person firm called Ringtail Design.

Minutes later, the next speaker just happened to be Ringtail CEO Jeff Carpenter. Ringtail has been participating in NIEs since the beginning — 21 months — but, he said, “small business have little or no insight” into whether the Army actually plans to buy their products.

Turning to Greene, Carpenter added, “until your last slide, I didn’t know you had any interest.”

“There’s no clear path to closure [or] acquisition” for companies large or small, agreed Doug Medcalf VP for network and imaging systems at the well-established IT firm DRS which has had “several hundred pieces of hardware” go through NIEs.

The Army’s good at articulating its requirements and “capability gaps” where its current equipment isn’t enough, Medcalf said, but “in many cases capability gaps are published, industry responds and participates [in NIEs; then] they just disappear.”

It’s not that either Medcalf or Carpenter downplayed the NIE’s advantages. “One of the key benefits you get from a small business perspective is the interaction with the soldiers,” Carpenter said. Products that make it through several layers of vetting are issued to an actual combat brigade, based at Fort Bliss, Texas, for exercises at White Sands Missile Range — and company reps attend to help soldiers get everything to work in field conditions.

It’s also expensive. “For NIE 12.2” — the Network Integration Evaluation held last summer — “RingTail Designs spent the equivalent of 50 — five-zero — percent of its annual income on supporting NIE,” Carpenter said. “We would have gone broke,” he said bluntly, without supplemental funding from the Army’s SoSI (System of Systems Integration) Directorate.

A lot of companies don’t even know that funding is available, Carpenter said, before turning back to Maj. Gen. Greene to ask: Is it still available?

For now, Greene said ruefully, but Washington budget dysfunctions such as sequestration or a year-long continuing resolution could change that, so check back in a few weeks.

“Make sure to apply for that supplemental funding,” Carpenter told the audience.

The Army has a plan to keep technologies from getting lost in the NIE shuffle, Greene told the audience at AUSA: The service is now working to match every system under evaluation with one of its Program Managers, the same officers who oversee the official “programs of record” for everything from rifles to helicopters established by the regular budget process. The idea is that if a system does well at NIE, it will have an advocate in the Army acquisitions bureaucracy who can help it get funded and formalized.

Being brought into the fold that way would be a big help, said Carpenter: “If I only had someone in uniform to stand up for my system, I could get these questions answered, but I’m competing with a bank of people all of whom are from an Army PM.”

Indeed, the Army may simply have tried to pack too much in one big event. NIEs have sometimes been dominated, not by innovative niche technologies, but by the massive “increment 2” upgrade to the Warfighter Information Network – Tactical. WIN-T is supposed to be the electronic foundation on which other command-and-control capabilities can be built — but until recently, WIN-T “inc 2” was itself a work in progress.

“We’re trying to innovate over shifting sand…an unfinished foundation,” said Carpenter. “We can’t really expect as a community to test and evaluate WIN-T at the same time we’re testing and evaluating systems that run on top of it.”

While WIN-T wasn’t as finished a product as the Army had expected it to be, plenty of industry participants over-promised as well. “We had a lot of claims, assertions that a system could do certain things, and it didn’t happen,” said Maj. Gen. Genaro Dellarocco, chief of the Army Test and Evaluation Command (ATEC).

So the Army’s added a new “lab based risk reduction” phase to the NIE process to vet candidate technologies in a relatively low-cost laboratory environment, before investing the Fort Bliss brigade’s time in a full-scale field test.

“When you come to the lab based risk reduction, it saves everybody time if you’re realistic,” Dellarocco told the assembled contractors in the audience. “If you’re not ready, don’t show up, because frankly you’re going to be wasting your own money.”

So both sides, industry and government, have a steep learning curve to climb to fix the NIE. Things as simple as how people label their PowerPoint slides can create a problem, noted retired Brig. Gen. Peter Palmer. Army officials reflexively mark everything FOUO, “for official use only,” he said — including information on how to participate in the NIE process in the first place, which creates a Catch-22: “You have to be working with the government to get [guidelines on how] to work with the government.” That’s a minor hiccup for big defense contractors like Palmer’s current employer, General Dynamics, he said, but a huge hurdle for precisely the small, innovative firms the Army most wants to attract.

But if the NIE process can realize its full potential, there’s a big pay-off.

Over the last decade, the military’s procurement system — especially in the Army — has split in two: a “rapid equipping” express lane rushed urgently niche capabilities to the battlefields of Afghanistan and Iraq, be they network technology or uparmored vehicles, while equipment intended for general use lumbered along through the traditional bureaucratic traffic jams.

When they worked, the expedients saved lives. When they didn’t — or when they worked for a while only to be rendered obsolete by new enemy tactics — they were tossed in storage and forgotten.

“We got into M [materiel] resolutions for everything, and I found most of those M solutions in CONEXes as I tried to leave Iraq,” said Gen. Robert Cone, who oversaw much of the withdrawal from Iraq, speaking on the first day of the conference. The urgently fielded equipment was never properly integrated into Army organization, training, and doctrine, said Cone, who now heads the Training and Doctrine Command (TRADOC), and without such institutional roots, it often withered and died. As budgets tighten and wartime urgency fades, Cone warned, the Army won’t have the money for one-off solutions that work for a short time, for a few units, and then get thrown away.

But the Army can’t afford to pour billions into mega-programs that get overtaken by events and cancelled: the Crusader heavy howitzer, the Comanche stealth helicopter, and, most expensively of all, the bewildering array of armored vehicles, robots, and software known as the Future Combat Systems.

So now the service has to find the happy medium between an express-lane process that produces an expensive patchwork of partial solutions and a regular process that simply takes too long. For all its flaws, the NIE is the Army’s best bet to close that gap.