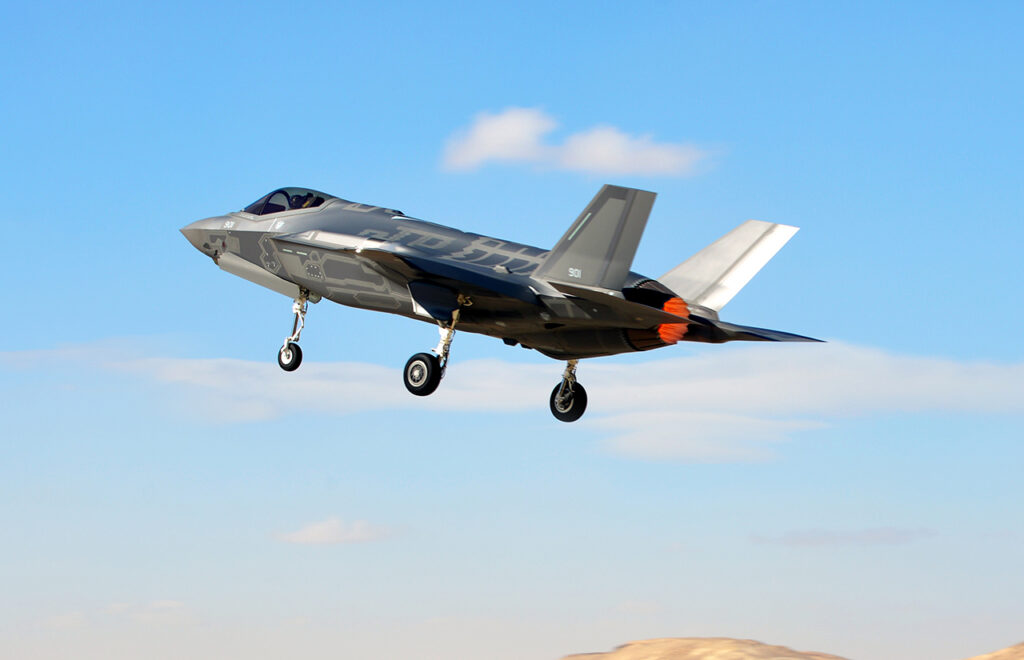 First of two Israeli F-35s arrive at Nevatim Air Base

Israel faces increasingly tight restrictions on its Foreign Military Financing from the U.S., as Breaking D readers know. In the past, when the US provided Israeli with grants under the Foreign Military Financing (FMF) program, Israel could convert 25 percent of the aid from dollars into shekels to buy Israeli products and support local R&D. The new 10-year FMF agreement signed in 2017 decrees that that will gradually drop  to zero. In this commentary, former minister for congressional affairs at Israel’s Embassy here, Yoram Ettinger, argues that America gets a great deal in return for the aid and assistance it provides Israel. Read on! The Editor.

Contrary to conventional wisdom, US-Israel relations have outgrown their one-way-street mode (the US gave and Israel received with much appreciation), evolving into a mutually-beneficial, two-way street mode, providing the US a well-deserved high-return on its annual $3.8 billion investment in Israel, conventionally defined as “foreign aid.”  However, Israel, unlike all other recipients of foreign aid, is neither foreign, nor does it receive aid. 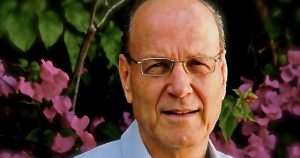 The US-Israel strategic compatibility is underlined by their national security orientation, allocating 3.6 percent and 4.7 percent of their budgets, respectively, to defense, much more than any European country: Britain 2.1 percent, France 1.8 percent, Germany 1.1 percent and Italy 1.1 percent, etc.

The scope of US-Israel strategic cooperation has surged since the 1991 demise of the USSR, which transformed the bi-polar globe into a multi-polar arena of conflicts, replete with highly unpredictable, less controllable and more dangerous local and regional threats. Israel’s experience and capabilities in facing such threats has provided the US a unique reinforcement in the face of three critical challenges, which impact the national and homeland security of the US: the megalomaniacal vision of Iran’s Ayatollahs; the clear and present threat of Islamic terrorism; and the need to bolster the pro-US Arab regimes, which are lethally threatened by the Shi’ite Ayatollahs and Sunni terrorist regimes.

In addition, the convergence of US-Israel strategic interests has been enhanced in response to the anti-US Arab tsunami (conventionally defined as the Arab Spring); the declining European posture of deterrence; the drastic cuts in the US defense budget; an increasingly unpredictable, dangerous globe; Israel’s surge of military and commercial capabilities; and the 400-year-old US-Israel shared Judeo-Christian values.

In July, 1950, in the aftermath of Israel’s War of Independence, Gen. Omar Bradley, first chairman of the US Joint Chiefs of Staff, said: “The Israeli army would be the most effective force south of Turkey, which could be utilized for delaying action [extending the strategic hand of the USA]….” General Bradley’s assessment was rejected by the State Department and the Pentagon, which opposed the 1948 establishment of the Jewish State, contending that it would be decimated by the Arabs, a burden upon the US and probably an ally of the USSR.

In 2018, General Bradley’s  assessments are vindicated, as the pro-US Saudi Arabia, Bahrain, the United Arab Emirates, Kuwait and Oman, as well as Jordan and Egypt, seek further strategic ties with Israel. They view Israel as a most effective ally in the face of lethal threats posed by the anti-US ayatollahs, ISIS (Daesh) and Muslim Brotherhood terrorists, irrespective of the unresolved Palestinian issue – which they never considered a crown jewel – and their fundamental reservations about the existence of an “infidel” Jewish State in “the abode of Islam.”

In 2018, Russia lends credence to General Bradley recognizing Israel’s enhanced strategic posture, accepting Israel’s military operations against the rogue ayatollahs and Hezbollah terrorists in Syria, which has been a Moscow satellite since the late 1960s.

Moscow recognizes the impact of the Israel’s posture of deterrence on the Washington-Moscow balance of power: the 1967 Six Day War stopped the lethal offensive by pro-USSR Egypt against Saudi Arabia and other pro-US oil-rich Arab countries; a 1970 Israeli military mobilization forced the rollback of the pro-Soviet Syrian invasion of pro-US Jordan; the 1967 and 1973 Israeli military victories over Soviet-armed Egypt and Syria provided the US military with a rare study of Soviet military systems and Soviet battle tactics; the June 1982 (first ever!) destruction of 29 of the most advanced Soviet surface-to-air missile batteries and the downing of 83 Soviet MIGs employed by Syria, and subsequent sharing of innovative battle tactics and technology with the US; the 1981 and 2007 Israeli destruction of the nuclear reactors in pro-Soviet Iraq and Syria, which spared the US a nuclear confrontation in 1991 and a much more traumatic Middle East. And there’s more.

Some 70 years since the reestablishment of Israel, notwithstanding the minute size of its population and territory, the Jewish state has emerged as a uniquely stable, democratic, reliable, creative and effective ally of the US in the Middle East. That includes cooperation on commercial, military, scientific and technological issues.

The potential of Israel’s strategic contribution to US military and commercial interests has been bolstered by the Israeli experience and state of mind, which are top heavy on patriotism, attachment to roots, collective responsibility, ingenuity and defiance of the jugged cutting edge of nature, militarily and commercially.

The transformation of US-Israel relations from a one-way-street to a mutually-beneficial two-way-street, has occurred despite the tactical, short-term US-Israel disagreements over the Arab-Israeli conflict and the Palestinian issue. The significant compatibility between the strategic, long-term regional and global challenges and threats facing both nations has transcended such disagreements.

In 2018, Israel’s Air Force features the US-developed and manufactured F-35 stealth fighter, serving as a battle-tested laboratory for the US Air Force and the plane’s manufacturer (Lockheed Martin), as it has been for the manufacturers of the F-15, F-16, missiles and missile launchers, tanks, armed personnel carriers and hundreds of additional US military systems. Israel has shared with the US lessons learned by Israeli pilots, who fly under a do-or-die state of mind. This has helped stretch the performance of the US-made aircraft beyond conventional standards. Such lessons have enhanced the capabilities of the US Air Force and the quality of the next generation of the F-35, saving the manufacturer many years of research and development, enhancing US competitiveness in the global market, increasing US exports and expanding US employment. In other words, the annual transfer of $3.8 billion to Israel (which funds the acquisition of US military systems) is not “foreign aid” to – but a highly profitable investment in – Israel.

In 2018, in response to growing sophisticated online and offline threats posed by Arab/Islamic countries and beyond, Israel has become a leading developer/producer in the area of cyber-technology, second only to – and in close collaboration with – the US. Israel is the site of 15 percent to 20 percent of the global venture capital raised by cybersecurity companies, aiming to defend critical infrastructures, while preempting rogue regimes. On January 30, 2018, General David Petraeus, former CIA Director, stated: “the [US-Israel] collaboration reaches new heights, far beyond what is being published in the media…. Our cooperation has harmed significantly Iran’s nuclear program….”

In 2018, Israel is the chief source of intelligence for the US on the volatile, tectonic Middle East, which has been a highly-complex platform of global terrorism, inherent instability, unpredictability, tyranny, domestic and regional intra-Arab/Islamic violence and intolerance, tenuous and shifty regimes, and consequently tenuous and shifty policies and agreements.

The reference to Israel, as “the largest US aircraft carrier, deployed in a most critical region, with no Americans on board” – made by former Supreme Commander of NATO and Secretary of State, the late Alexander Haig – reverberates with an assessment made in 1923 by British Col. Richard Meinertzhagen, a top intelligence officer in the western region of the Middle East: “I’ve always considered the Land of Israel to be the key to the defense of the Middle East…. When a Jewish State will be established, Britain shall benefit from air force, naval and land bases… as well as Jewish fighting capabilities… which will secure its long-term regional interests…. Unlike the Arabs, Jews are reliable and do comply with agreements…. The British policy in the Middle East bets on the wrong horse, when appeasing the Arabs….”

Will President Trump adhere to – or ignore – past experience?

Will President Trump defy the State Department’s and “elite” media’s traditional quid-pro-quo (and self-defeating, artificial connection) between the enhancement of the mutually-beneficial US-Israel strategic cooperation, on the one hand, and Israeli retreats from critical terrain, which would exacerbate regional instability, intensify threats to pro-US Arab regimes and undermine US national and homeland security?

Will President Trump continue to expand US-Israel strategic cooperation, by focusing on the wider strategic context of the Middle East, or will he follow in the failed footsteps of Europe, which has largely sacrificed Middle East geo-strategic reality on the altar of oversimplification, quick-solution state-of-mind, appeasement and the misperceived role of the Palestinian issue?!

Yoram Ettinger, former minister for congressional Affairs at Israel’s Embassy in Washington, is now a consultant to Israeli and US legislators.