Army soldiers use their radios during an exercise in South Africa.

It’s all part of a wider effort to rebuild the Army’s command, control, and communications (C3) networks for war against a high-tech great power. Speaking at a cyber and networks conference held here Aug. 2 by the Association of the US Army, Bassett said the Army will conduct operational testing of new command systems — including two lower-complexity alternatives to complement the current mainstay, JBC-P — and start fielding them, he said, “this fall.” 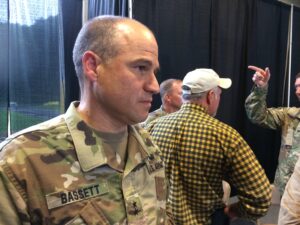 Why the rush? Army systems like WIN-T (Warfighter Information Network – Tactical) worked adequately as long as we had big bases in Afghanistan and Iraq, with plenty of time to set up extensive infrastructure and minimal enemy interference. China and Russia, however, have cutting-edge cyber and electronic warfare attackers to hack the network software, powerful electronic warfare units to jam its transmissions, and long-range precision guided missiles that can easily target large, stationary command posts. So last year Army Chief of Staff Mark Milley ordered a crash program of improvements, cancelling planned WIN-T upgrades in favor of new technologies, many from the thriving commercial IT sector.

“It was kind of a shock to the system,” the Army’s Chief Information Officer, Lt. Gen. Bruce Crawford, told the AUSA conference. “The Army came forward and said there were some programs it wanted to halt and some things it fundamentally wanted to do differently.”

Gen. Milley’s announcement met with initial resistance, including on Capitol Hill, but inspired intense interest from industry. Maj. Gen. Bassett himself had come to the AUSA conference from a meeting in Raleigh, one corner of North Carolina’s thriving “research triangle,” where he had briefed 400 representatives from some 126 companies. 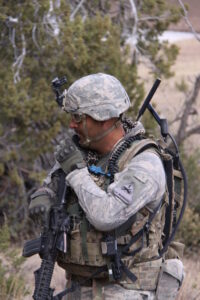 Traditional Army procurement relied on specialized defense contractors to develop bespoke solutions to military specifications, which created a patchwork of incompatible and hard-to-update systems for different purposes, some as narrow as running the network infrastructure on a single base. So the new approach is for the Army to set common standards, preferably ones already in wide use commercially, and then to open competition to all comers whose products meet the standard. This kind of open architecture allows the military to plug-and-play the latest technology as needed, without having to overhaul the underlying infrastructure every time.

Since frontline troops can’t spool out miles of fiber optic behind them as they maneuver, battlefield networks have to be wireless. That brings us back to radio waveforms. While old-fashioned radios had their settings largely hardwired in, modern Software-Defined Radios (SDR) can change how they operate just by loading a different program. A waveform is a set of software instructions governing things like wavelength, encryption, rapid frequency changes to avoid hostile jamming, and how to add and subtract radios from the network as they turn on and off, get jammed, or move.

The Pentagon spent billions developing bespoke waveforms like Soldier Radio Waveform (SRW) for small ground units and Wideband Networking Waveform (WNW) for large formations of both air and ground vehicles. But the commercially developed TSM waveform scales up better to large numbers of users and is generally less complex, more robust, and more capable, Bassett told me after his talk.

But can commercial systems hold up on the battlefield against high-powered jamming, a threat that doesn’t exist in the civilian world? “If you’ve got a strong enough jammer you can take down any com systems,” Bassett told me, “but you’ve got to be close to do it and you’ve got to have enough power.”

The solution is two-fold. First, Bassett said, “we want to make it so those systems are harder to take out from a distance,” so the enemy jammer has to either get close, ramp up the power, or both, making itself an easier target. Second, he said, “they can’t jam you everywhere all the time, (so) it’s also about having multiple redundant means of communication.” That’s another reason to change Army procurement to be able to buy a wide range of commercial products.