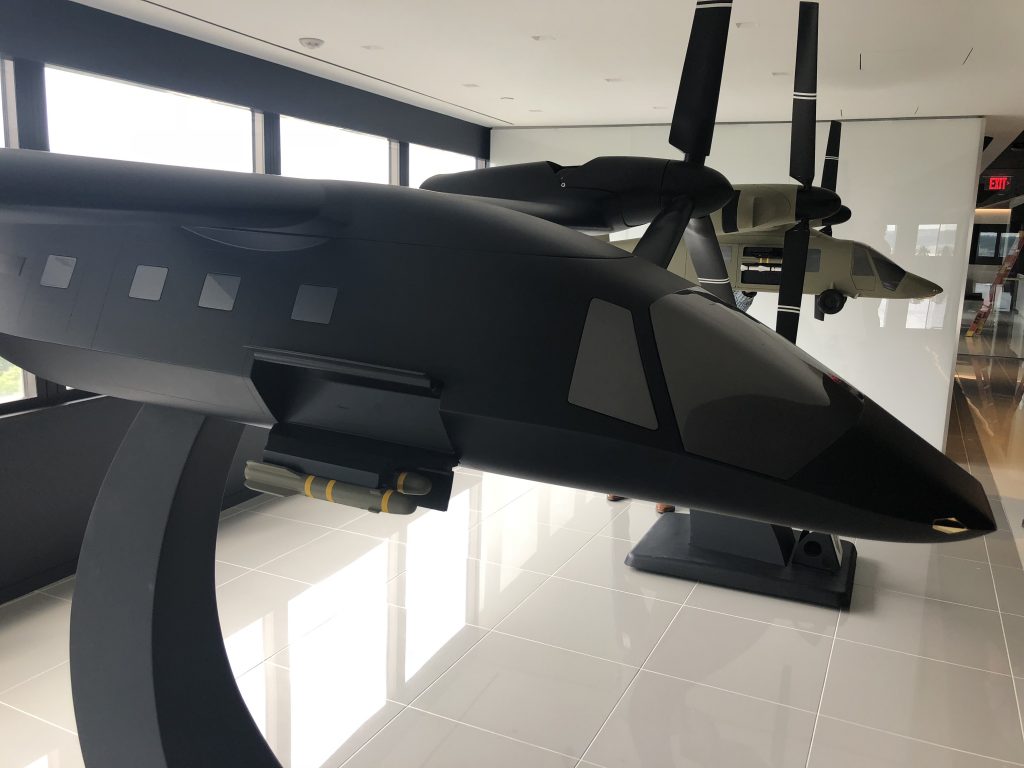 ARLINGTON: How new is Bell Helicopter’s shiny showroom — excuse me, Advanced Vertical Lift Center — minutes from the Pentagon and the Capitol? Between the time I arrived this morning and the time I headed out, they installed two huge mockups of their high-speed V-280 Valor tilrotor. But these aren’t land-based troop transports like the prototype Bell’s already flying for the Joint Multi-Role (JMR) demonstration program. They’re heavily armed gunships. 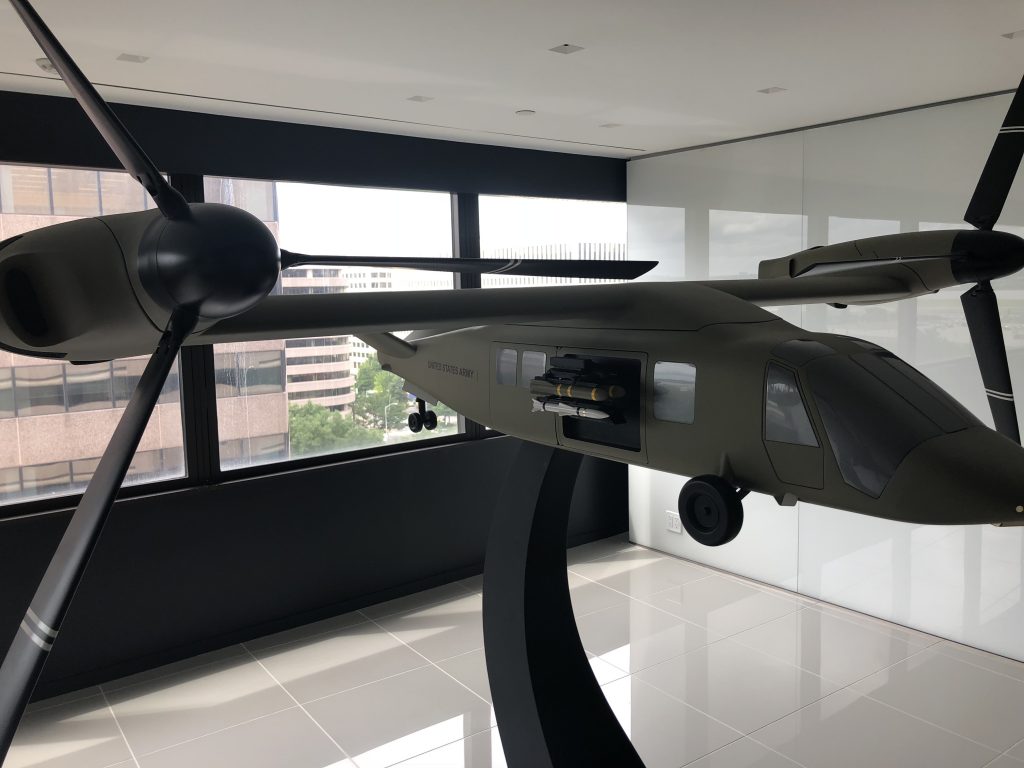 V-280 attack variant, the easy but ugly way: fill the passenger cabin with missile racks sticking out the doors.

One, in Army colors, has missile racks sticking out of what was originally the passenger cabin — a conversion that units could potentially install or remove as needed in the field. The other, with Marine Corps markings, is a sleeker thoroughbred gunship with internal weapons bays, stealth features, and folding wings to fit in shipboard hangars.

Bell showed off these mockups before, but there’s almost no imagery available online, so when executives said I was free to take photos, I had my phone out at once. Equally interesting was what they said about another design they’ve still got under wraps: Bell’s contender for the Army Future Attack Reconnaissance Aircraft (FARA), a scout light, small, and agile enough to avoid detection by flying down city streets. 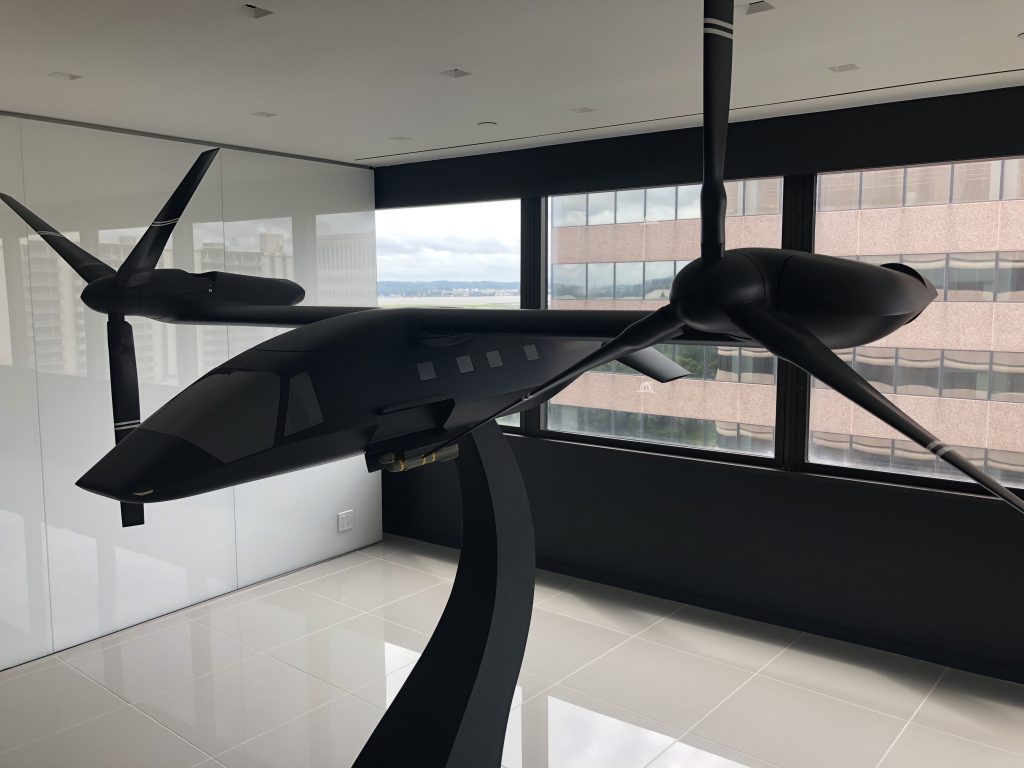 The V-280 variants and the FARA concept all embody a shift in emphasis for both Bell and the Pentagon. In recent years, the military, Bell, and the rival Sikorsky-Boeing team have emphasized a mid-sized transport — officially, Future Vertical Lift (FVL) Capability Set 3 — to replace helicopters like the Army UH-60 Black Hawks. The Bell V-280 tiltrotor and Sikorsky-Boeing SB>1 compound helicopter would perform the same missions as current choppers — air assault, resupply, medevac, and so on — but with the much greater speed and range required to defeat 21st century anti-aircraft defenses. 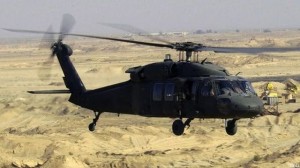 What about a gunship version? The Army’s in no particular hurry to replace its repeatedly-upgraded AH-64 Apache, so they’ve not issued a requirement for an attack aircraft in the Capability Set 3 size range. The Marines, however, are very interested in something with the firepower, speed, and range to accompany their unarmed V-22 Osprey tiltrotor transport.

Then, just this March, the Army announced it urgently needed a new armed reconnaissance aircraft, a light scout to replace its retired OH-58 Kiowas. (The official name FARA came later). While the service had repeatedly tried and failed to replace the Vietnam-era OH-58s in the past, their decision to take another shot — and make it their top aviation priority in the process — was unexpected. 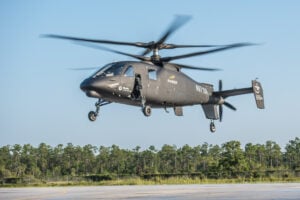 At least some commentators thought this was bad news for Bell. Like Sikorsky and Boeing, Bell had invested millions of its own money in developing the larger but less heavily armed FVL Capability Set 3 assault aircraft. Unlike Sikorsky-Boeing, Bell had already started flying its Joint Multi Role demonstrator, effectively an FVL prototype, putting Bell in the lead. But the Army’s refocus on FARA meant it wanted something smaller and more nimble, much like the S-97 Raider that Sikorsky had been flying since 2015. Indeed, Sikorsky partisans argued that their “compound helicopter” design — which combines conventional horizontal rotors with a pusher propeller for speed — is inherently more maneuverable than Bell’s tilt-rotor technology — in which the whole rotor assembly pivots from horizontal (for takeoff and landing) to vertical (for speed and distance). 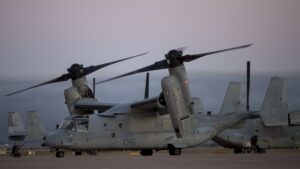 Bell’s not ready to share their FARA concepts yet, in part because they’re not sure which one will best match the final Army requirement. For example, the Army wants to use the ITEP (Improved Turbine Engine Program) engine, but the final decision hasn’t been made on whether to use one ITEP or two, which would have dramatic, cascading effects on weight, complexity, and cost. 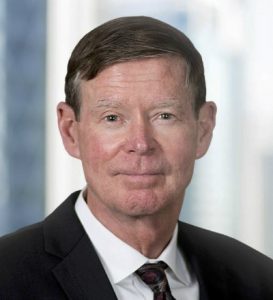 Perhaps most important, the current document specifies a cruising speed of 180 knots (207 miles per hour), with short dashes up to 205 knots. You don’t necessarily need a tiltrotor to do that, Schloesser told me. “It’s at the far edges of a conventional helicopter (design), as far as the speed, but it’s not impossible,” he said, especially if you add a pusher propeller to create a “compound” design like Sikorsky’s. On the other hand, if the Army decides in the final analysis to increase that speed requirement even slightly, you may need a very different aircraft.

Bell is confident it can meet whatever speed the Army wants: They had an experimental tiltrotor, the XV-15, flying at 300 knots way back in the 1970s. The real challenge, however, and where Bell really thinks it can shine, is the sustainability.

High-performance aircraft can easily become maintenance-hungry hangar queens, but that won’t do for an Army or Marine Corps frontline combatant operating out of dusty, muddy ad hoc airfields. Without contractors or advanced equipment on hand, and with demands for multiple missions flown per day, you need something that’s both high-performance and highly rugged. To get that combination, “it’s going to have to be high-tech,” Schloesser said — not just the aircraft itself but also the manufacturing process. 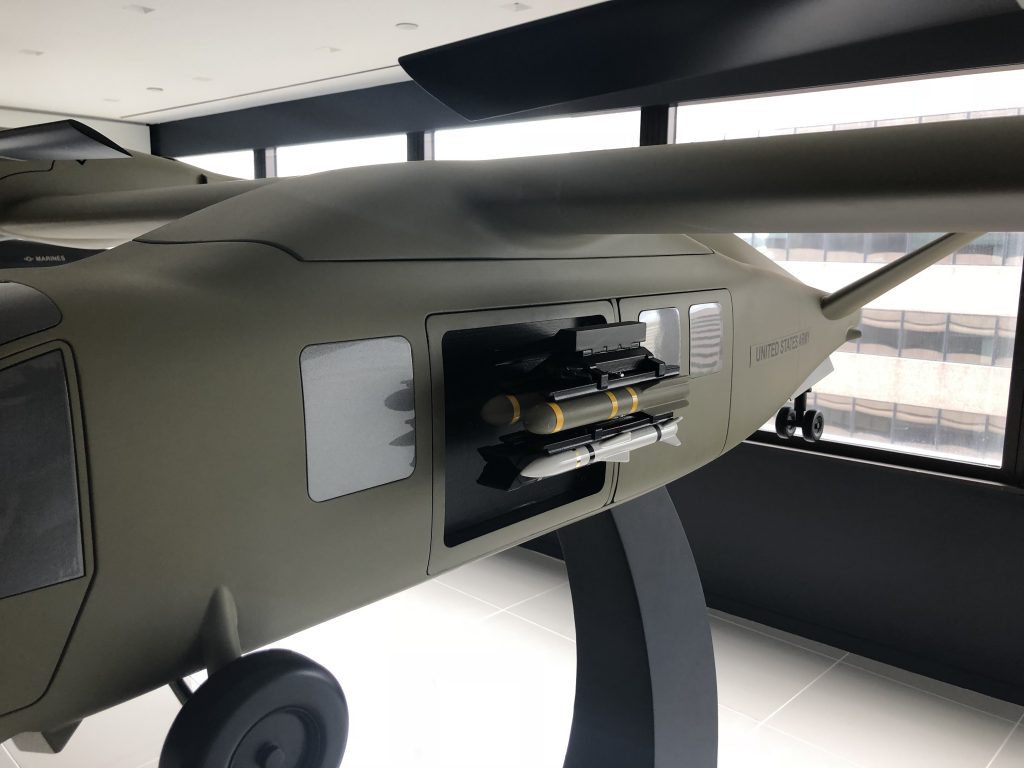 Close up on the missile racks installed in the passenger cabin of the V-280 to make it a gunship. Bell says this conversion could be done in the field.

Bell is intensely proud of how they’ve streamlined the manufacturing of the V-280 compared to the V-22. While they have 11 partner companies providing various components, Bell manufacturers the wings, rotors, and drive train entirely in house, using new technology that allows them to radically reducing the number of parts and the complexity of assembly. They’ve reduced the time it takes to make a set of rotor blades by a third, for example, the time to make the wing by half, and the time to make the yoke (which holds the rotors together) by two-thirds. These simpler components in turn make maintenance much easier for troops in the field.

Part of the difference is that’s due to new technologies that didn’t exist in the 1980s when the V-22 was first being built, such as composite carbon-fiber materials to replace painstakingly assembled pieces of metal and 3D “digital thread” design to replace libraries of paper blueprint and field manuals. Part of that’s due to lessons learned from more than three decades of building, flying, and maintaining the V-22. The V-22’s wing, for example, has a graceful curve that makes it easier to fold up for shipboard storage but much harder to manufacture. By contrast, the V-280 wing is so painfully ruler-straight, a nun could rap your knuckles with it. 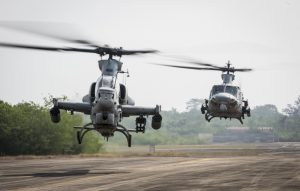 Another way to save both money and time in both production and maintenance is having multiple types of aircraft with common parts. Bell’s model here is its work on the Marine Corps AH-1Z gunship and UH-1Y transport, which have totally different roles and very different shapes but share 84 percent of their spare parts. The company wants to do the same thing for its V-280 variants.

In fact, mechanics at a forward base could convert a transport V-280 into a gunship by installing a weapons rack in the passenger/cargo bay — and then convert it back if needed. It’s the same principle as the UH-60L DAP (Defensive Armed Penetrator), a Black Hawk turned gunship used by the Army’s 160th Special Operations Aviation Regiment (SOAR), Schloesser’s old command.

This arrangement isn’t exactly elegant. You have to open (or remove) the side doors to stick the missile launchers out so they can fire, which increases drag, in turn reducing speed and fuel efficiency. But it’s easy to design, build, install, and remove again, which might overcome the Army’s lack of interest so far in a Capability Set 3 gunship. 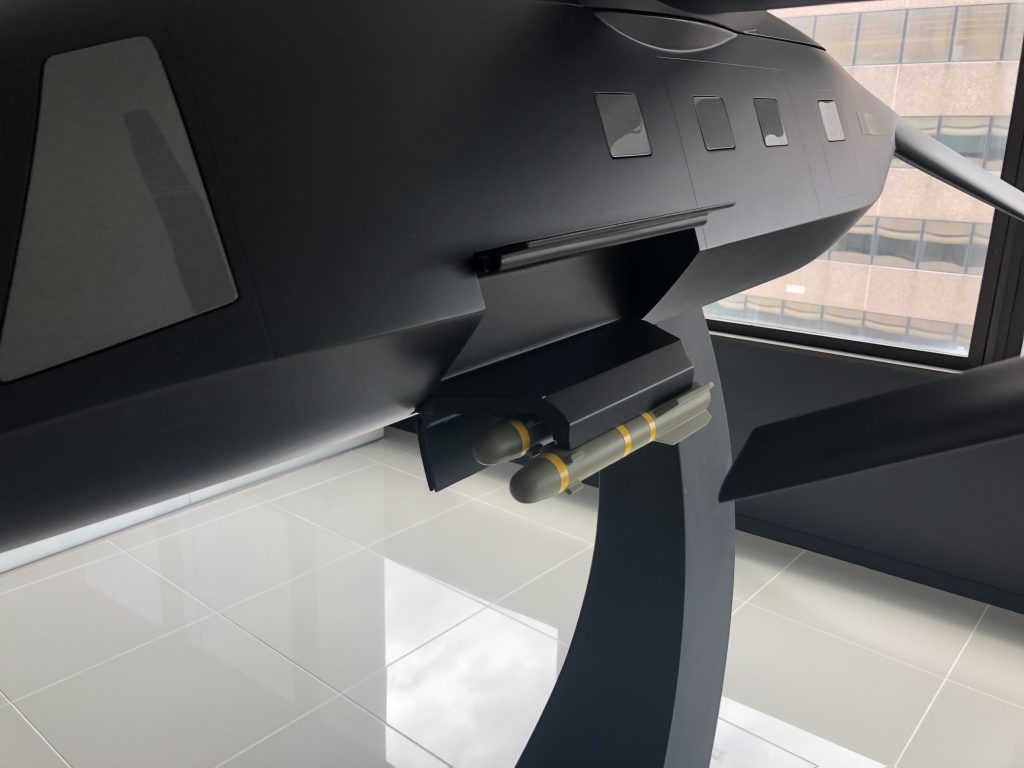 The thoroughbred gunship version — for the Marines — would have internal weapons base that only open to fire, streamlining the aircraft for higher speed and lower radar cross-section. It could also have some room for a few passengers, although not a full squad, a hybrid attack-transport concept that the Marines are curious about. (The Sikorsky S-97, for example, carries six passengers). 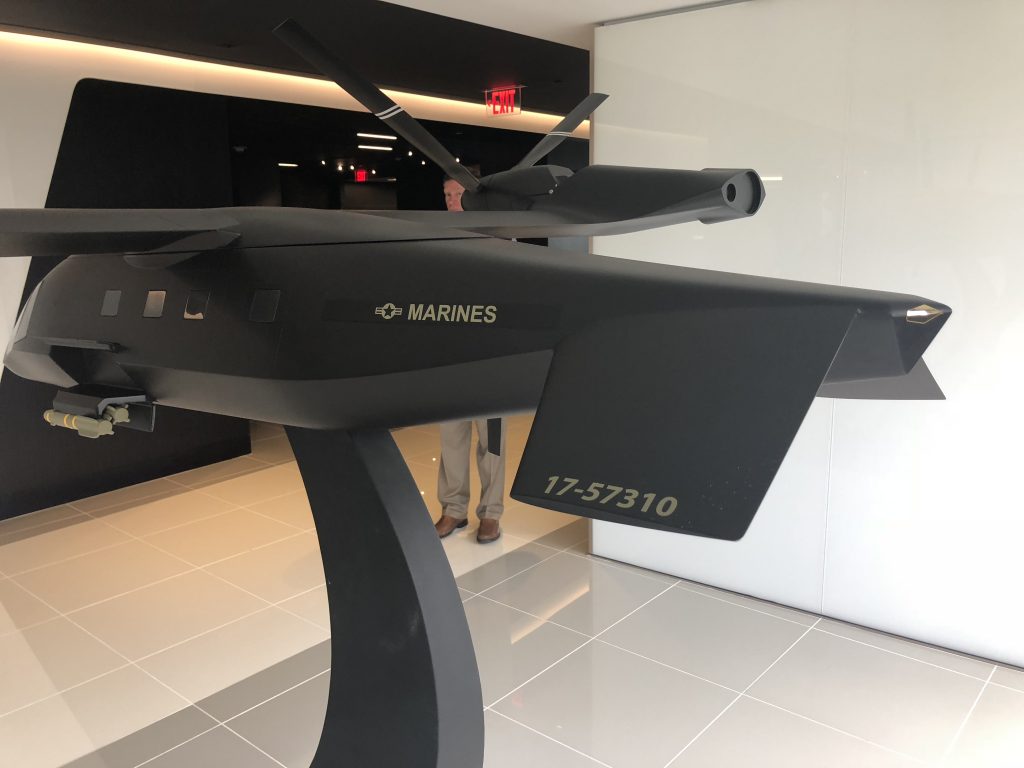 Rear of the “marinized” V-280 gunship for shipboard operations — note the inverted-V tail, allowing the wing to fold over it.

The concept model also has some “low observability” features to make it harder to detect on radar, although Bell is leery of using the word “stealth.” It also has a number of special features for shipboard use. Most visibly, the V-shaped tail points down, not up, so the nothing smacks into it when you fold the wings up. Bell says their “marinized” V-280, wings folded, could go not only in the large hangars aboard an amphibious assault ship but the much smaller ones aboard an Aegis destroyer.

While Schloesser didn’t elaborate, being compatible with destroyers would open a wide range of missions for the V-280, allowing it to replace not just Marine assault aircraft but Navy utility aircraft and sub-hunters as well. That kind of versatility is very attractive to both military operators and Pentagon budgeteers — and the extra sales, of course, would be more than welcome at Bell. 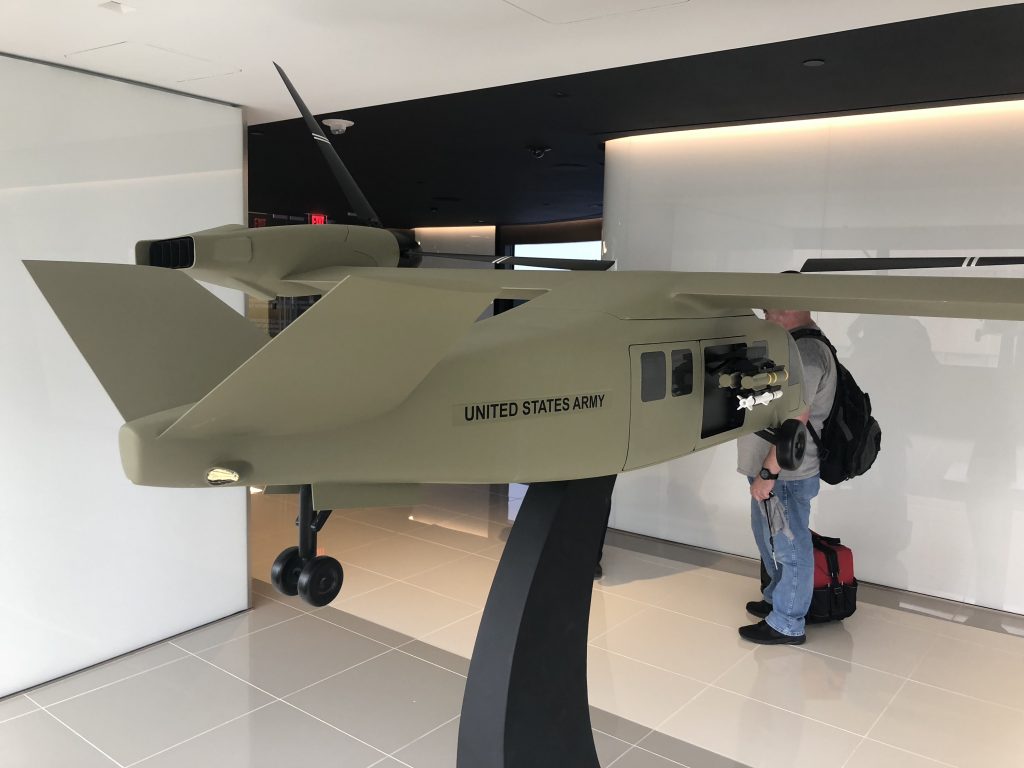 Rear view of the land-based gunship version of the V-280, showing the V-shaped tail and missile racks projecting from the side doors.