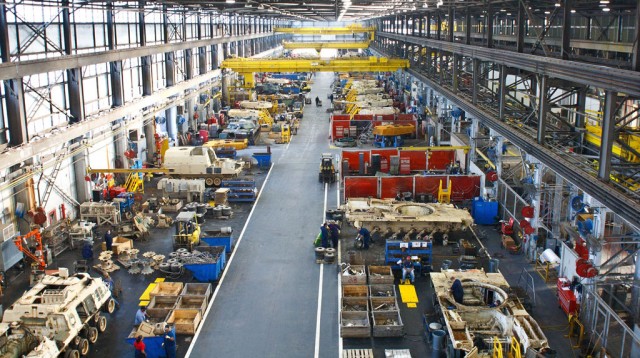 AUSA WINTER, HUNTSVILLE, ALA.: Fear is in the air.

“The commercial base will disappear,” Boeing executive James Moran believes. It’s not just sequestration, the retired brigadier general said this morning at the Association of the US Army’s winter conference. There is real anxiety among defense contractors that as budgets tighten, the Army will starve private sector companies of work to keep feeding its in-house government facilities, the depots and arsenals whose employees are so popular with Congress.

But maybe it’s Congress that should be worried. Yes, the Hill has consistently blocked a new Base Realignment And Closure round, the process that has governed cutbacks in military facilities throughout the post-Cold War era. But largely forgotten laws actually give the Defense Department authority to close facilities without a BRAC — without, in fact, even getting permission from Congress. If the Pentagon and the White House were willing to take the political risk, they could shut down facilities unilaterally and dare a gridlocked Congress to undo it.

Buried in Title 10, the chapter of the US Code that governs the Defense Department, is Section 2687. “It does give the services authority to do closures, and it only requires notification to Congress,” said House Armed Services staffer Vickie Plunkett this morning at the AUSA conference.

“It’s notification with time for Congress to act” before the closure is carried out, Plunkett noted. But, the veteran staffer went on — emphasizing that her opinions were her own, not committee policy — “Congress is basically dysfunctional right now.”

“The authorities only require notification. Take your chances,” she said to an eruption of laughter, “because it’s going to require us to get our act together to stop it.”

The Pentagon is in an even stronger position when it comes to the Army’s arsenals, the government-owned manufacturing facilities for military equipment. Section 4532 of Title 10 — portions of which predate the Civil War — is the Arsenal Act. The statute’s usually seen as protecting the arsenals, because it requires the Army to produce all its supplies “made in factories or arsenals owned by the United States”  — unless the private sector can do it cheaper, which is of course an enormous loophole. But there’s another line in the Arsenal Act, Plunkett pointed out:

“The Secretary may abolish any United States arsenal that he considers unnecessary.”

“Now the issue is, will the services…take advantage of those statutes?” she asked.

No one is suggesting that the Pentagon should try to slip something past Capitol Hill. As a matter of constitutional law, at a very minimum, any such actions need to be included in the annual budget, which has to be passed by Congress. As a matter of practical politics, the military informs Congress when it lets go even a handful of arsenal or depot employees, even people fired for misconduct, because it just takes one angry person to call their congressman to bring all sorts of hell down on the Army’s head. As one Army official told me, “You never know whether it’s going to be a a blip or a bomb.”

All politics aside, there are also national security reasons to keep certain “organic” industrial capabilities in government hands.

“There is a requirement to preserve a certain level of skill-set within the organic industrial base,” said Gen. Dennis Via, who heads the Huntsville-based Army Materiel Command. “We have to preserve some of those unique skill sets, to preserve the ability to surge in the future.”

For example, the military ran dangerously low on ammo early in the post-9/11 wars, said James Shields, the Army’s deputy program executive officer for ammunition. (The Army buys bullets for the other services as well). Commercial munitions firms were and are vital partners, Shields told the audience at Huntsville. But, he said, certain niche capabilities like ammunition propellant have to be government-owned: “I don’t think there’s enough business out there in the propellant world for a commercial business to stay in business and to keep that capacity we need open and ready for any contingency.”

There are other areas where the private sector did carry the lion’s share of a rapid ramp-up, notably the production of Mine-Resistant Ambush-Protected (MRAP) trucks to replace the all-too-vulnerable Humvee. “We cannot argue with the fact that the industrial base has surged two-fold, sometimes three-fold in these two wars,” said James Rogers, a retired two-star general who runs Army programs for mega-contractor Lockheed Martin. But precisely because both the private sector and government-owned facilities grew so much, it’s equally undeniable “that we are way over capacity in our depots and our industrial base,” he said. “We have to partner.”

The crowd-pleasing solution is so-called public-private partnering, especially the kind where private companies pay the government to use its already-paid-for infrastructure instead of paying to build their own. “All of our facilities are open for business,” enthused James Dwyer, a senior AMC civilian. “Why should you depreciate it, write it off, and make your stockholders buy it, when we’ve already got it and they’re there for partnering?

But partnering only divides the pie: It doesn’t make it stop shrinking.

“We won’t be able to sustain the level of workload that we’ve had when we’re supporting two wars,” Gen. Via said flatly. “There has to be balance” between private-sector and government-owned facilities, he said, but it’s awfully hard to plan it out when the budget is not only shrinking but uncertain. December’s budget deal pushed off sequestration (mostly) for two years. But, he said,  “after ’15 we don’t know exactly where we’ll be.”