PENTAGON: Yesterday’s $244 million missile defense test didn’t just hit an IBCM-like target for the first time in the history of the system: It hit a cutting-edge IBCM modeled on future North Korean weapons, complete with decoys to confuse defenders. 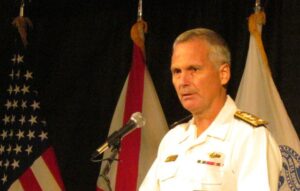 “It actually replicated — without getting into classified details — an operational scenario that we’re concerned about,” Vice Adm. James Syring, currently at NORTHCOM HQ in Colorado Springs, told reporters gathered here around a speaker phone. While the Missile Defense Agency director didn’t explicitly say the threat yesterday emulated a North Korean missile, he did say tests replicate threats “from North Korea or Iran. In this case it was a Pacific scenario.” (Protip: Iran is not in the Pacific).

In fact, MDA tests against the intelligence community’s best estimate of where the North Korean and Iranian missile programs will be “three years” from now. “What we see in 2020…was very well replicated in the tests that we conducted yesterday,” Syring said.

That cutting-edge threat includes a high-performance target. “It flew at a higher altitude and a longer range and a higher velocity” than any target in previous tests, said Syring. It’s the first time the US missile defense system has actually been tested against a target with the performance characteristics of an ICBM, which is the threat that inspired its creation in the first place, three decades and at least 123 billion dollars ago.

The threat also included decoy warheads, splitting off from the rocket booster alongside the real one and designed to look as identical as possible on radar and infra-red. Adding just one decoy per live warhead doubles the number of interceptors defenders have to launch to ensure a kill — unless they can tell real and fake apart as they coast through the vacuum of space. This “discrimination” challenge is more demanding than detecting the missile launch in the first place, since the rocket’s red-hot exhaust is visible from orbit. Syring said this is not the first time MDA has tested the system against decoys and defeated them.

With a twinge of exasperation, Syring also refuted suggestions that the test was a set-up, with the defenders knowing exactly when to fire and where to aim. “The target absolutely does not have a homing beacon on it, despite what some have written,” he said. The missile defense system “was not notified when the target was launched,” instead having to rely on radars and satellites to detect the missile’s take-off and compute its path, just as they would in a real-war scenario.

The missile defense crews did know the test was happening yesterday and the rough time window when it would occur, Syring said, but such things have to be scheduled and made public well in advance for safety reasons: “We’re launching an interceptor hundreds of miles north of LAX (Los Angeles airport, to) Hawaii,” he said. “That requires us to shut down large parts of the ocean (to) ship traffic and air traffic.”

Location of Reagan Test Site on Kwajelein Atoll in the Marshall Islands.

In a real-life attack, obviously, keeping Hawaii, Los Angeles, or Seattle from being obliterated would override the risk of a wayward interceptor hitting a jetliner or falling on a ship. The sensors involved would also be different, Syring acknowledged, but mainly because we have more sensors watching North Korea and the Western Pacific than we have in the peaceful Eastern Pacific where tests take place. Army AN/TPY-2 radars in Japan and Air Force radars in Clear, Alaska would play a major role against any incoming from North Korea, he said, whereas a target firing from the Kwajalein test site in the Marshall Islands is tracked instead by a lone TPY-2 on Wake and the Sea-Based X-band radar (SBX). That said, Syring emphasized, the system can detect the target and discriminate between warheads and decoys without using the SBX.

These future technologies should help missile defense stay ahead of the threat for at least a decade, just as the technology tested today is intended to defeat the threats of 2020. “I was confident before the test that we had the capability to defeat any threat that they would throw at us,” Syring said, “and I’m even more confident today.”