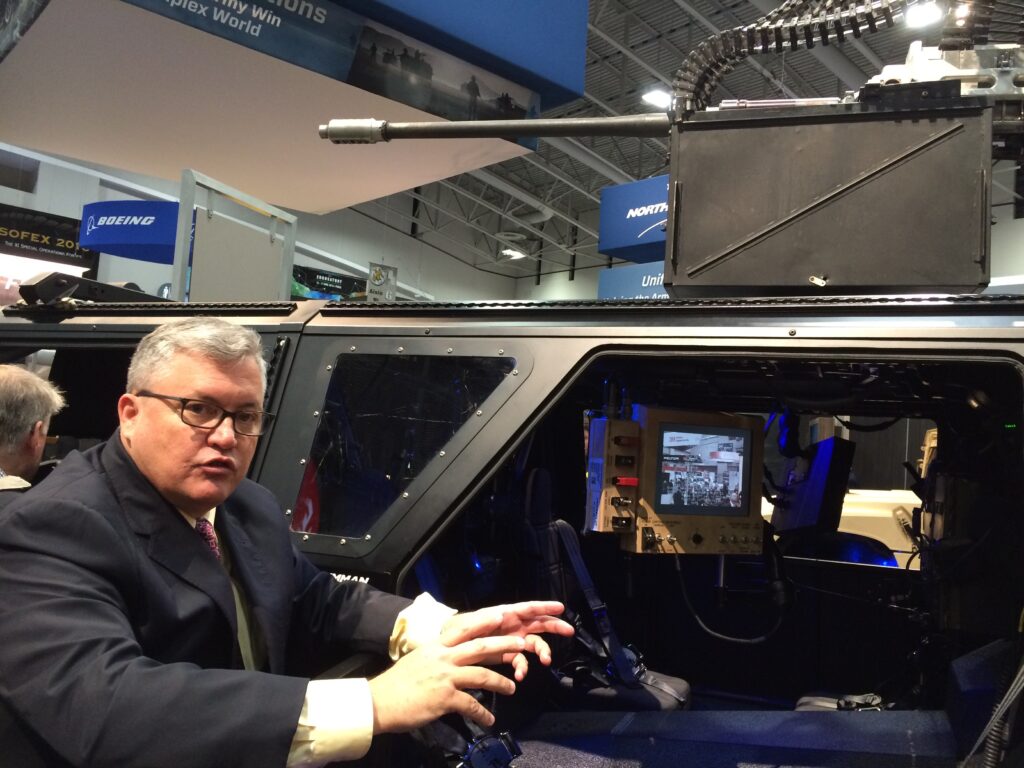 AUSA: “There’s never been that much power on a vehicle this small,” said Jeff Wood, showing off Northrop Grumman’s new Hellhound scout car. In fact, he told reporters, standing amidst the buzzing chaos of the exhibit space at Washington’s biggest defense conference, “I can power this entire hall with this vehicle.” In a disaster scenario, he said, the Hellhound could power a blacked-out hospital; in a war zone, it could power a command post. Or, Wood said, you could power a laser beam.

Developed for the Army’s Light Reconnaissance Vehicle competition, the Hellhound is a mid-sized off-road truck that can generate more electrical power for radios, sensors, defensive jammers, and other gear than much larger vehicles using older technology. The 30-ton M2 Bradley generates less than 20 kW, leading some variants to get brown-outs when fully kitted for Iraq; the 6.5-ton Hellhound, however, generates a whopping 100 kilowatts (kW). 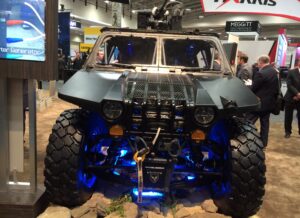 That much power even makes laser weapons possible, Wood said. In fact, Northrop is already designing one to go on the Hellhound, a 10kW weapon capable of shooting down small drones. (Electrical energy doesn’t turn into laser energy with perfect efficiency — that would violate the Second Law of Thermodynamics — so a 10-kW beam draws about 30-40 kW of power).

Admittedly, the Army hasn’t actually asked for a laser on the Light Reconnaissance Vehicle: Lasers are currently envisioned as defensive weapons against incoming rockets and drones, as on the Marine Corps’ Humvee-mounted GBADS (Ground-Based Air Defense System), which is not a reconnaissance role. For the scout mission, the Hellhound prototype mounts a 30 mm automatic cannon instead. But the Hellhound’s 100 kilowatts could also operate a wide range of power-hungry sensor, electronic warfare and communications kit, which are essential to reconnaissance.

The 100 kW could also power an active protection system (APS) to shoot down incoming projectiles before they impact the Hellhound’s minimal armor. When the Army launched the Light Reconnaissance Vehicle and its infantry-carrying cousin, the Ground Mobility Vehicle, it made a difficult choice. It very deliberately decided to sacrifice heavy protection — which has slowed down current vehicles — in order to keep LRV and GMV light enough to deploy easily by air — including inside a CH-47 helicopter — and maneuver quickly cross country. Giving the lightly armored vehicles an Active Protection System might make them much less vulnerable. 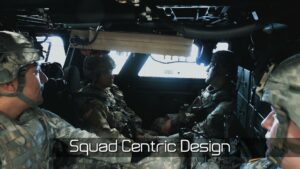 The two vehicles are part of a package intended to improve the mobility of airborne and light infantry formations. The Light Reconnaissance Vehicle scouts ahead, while the Ground Mobility Vehicle carries the bulk of the infantry squads. Some of the competing companies are offering the same basic design for each, modified for the specific mission. That allows for easier maintenance and, potentially, allows them to refit for one role or the other. But Northrop has no entrant in the GMV fight and argues the LRV mission requires a dedicated, specialized design.

“The Light Reconnaissance Vehicle is going to have a very unique mission,” Wood said. “It’s more an ISR [intelligence, surveillance, and reconnaissance] platform than it is a truck.”