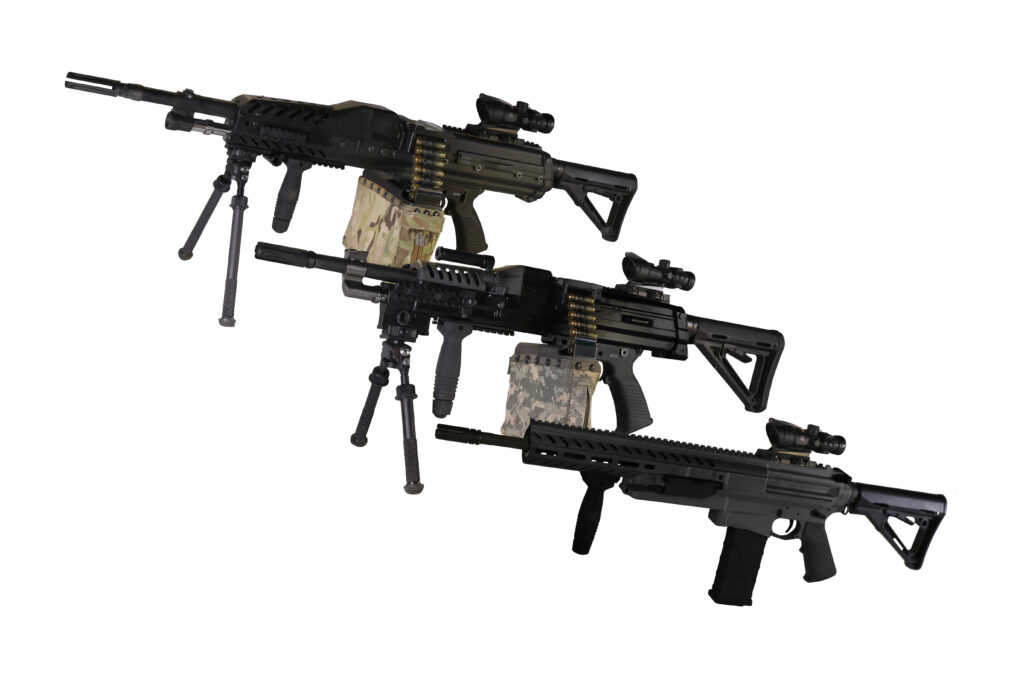 Early prototypes of Textron’s telescoped cased ammunition weapons. The company would not release photos of the 6.8 mm models now headed for Army testing.

WASHINGTON: Textron has partnered with global gun-maker Heckler & Koch to mass-produce new rifles for the Army and with ammunition giant Olin Winchester to churn out the high-powered yet lightweight 6.8 millimeter rounds.

Textron still has to beat both General Dynamics and Sig Sauer for the right to build the Next Generation Squad Weapons (NSGW). All three companies won awards last Thursday to build prototypes for troops to test, starting this coming spring and continuing through late 2021. No follow-on production contract is guaranteed. But Textron is watching the Army’s urgent push to modernize across the force, from assault rifles to hypersonic missiles and wants to be ready to sprint to mass production if it wins.

Textron could do everything in house, senior VP Wayne Prender said. But, he told reporters this morning, by working with Olin Winchester and H&K, which are experienced with largescale manufacture of ammo and weapons respectively, “we are preparing ourselves for a high rate of production.”

The Army wants to start fielding two variants of NGSW to tens of thousands of close combat troops — infantry, scouts, special operators, and so on — in 2022. Support troops and vehicle crews will stick with the current M4 carbine for the indefinite future. But frontline ground combatants will get more than just a gun.

Linked wirelessly with electronics all over the soldier’s body, including Microsoft HoloLens-derived targeting goggles called IVAS, the Next Generation Squad Weapon is meant to be just one lethal component of a larger, high-tech system. It’s like the Hellfire missiles on an Apache helicopter or the 120 mm Rheinmetall smoothbore cannon on an M1 tank, except this “weapons platform” moves on foot. This approach is part of a wider push, begun by former Defense Secretary (and Marine Corps rifleman) Jim Mattis, to improve the Close Combat Lethality of the military’s most exposed members.

The American grunt has accumulated more and more high tech over the last two decades. Designing a new weapon from scratch is a chance to streamline the scopes, cables, batteries, and other impedimenta festooning modern foot troops.

“All of those are now part of an integrated weapon system, versus a rifle that then has something else strapped onto it with wires hanging off,” Prender told reporters. “We can make some smart decisions early in the design process that enable it to be cleaner.” That should make the new weapon easier to use, lighter, and even better balanced, since the center of gravity is now calculated with installing add-ons in mind.

While troops will test the first prototypes this spring, each contender has 27 months to deliver a total of 53 NGSW assault rifles — potential replacements for the M16/M4 family in service since Vietnam — and 43 automatic rifles — replacing the M249 SAW — along with 850,000 rounds of 6.8 mm ammunition.

Like the M16, M4, and M249 with the 5.56 mm cartridge, the new NGSW family will all share a common 6.8 mm round, which is supposed to deliver longer range and greater body-armor-penetrating power without increasing weight much. Each competitor has their own spin on how to deliver the new rifle bullet.

The Army’s new modernization strategy — after decades of cancelled programs and incremental changes to aging weapons — is to try such great leaps forward but then test prototypes ASAP with real troops in the field.

The service has been “opening the doors of the Army to the contractors to get that feedback early and often,” Prender said approvingly. Each round of user feedback is meant to help the contractors improve their product, and the military to refine their specifications, until the service can confidently choose a refined design.

Now, the Army isn’t locking itself in. Whoever does best in testing, the Army hasn’t promised the winner a production contract. But Textron is betting they can convince an eagerly modernizing Army that their product is not only superior but ready to field without further R&D.

“Whether [to] move right into an initial Low-Rate Initial Production, followed by fielding and first unit equipped, or [to do] additional prototyping and maturation of the weapon system… all that will be determined by the Army,” Prender told reporters. “We have high confidence that our weapon system will meet all of the requirements that the Army has laid out… so we’re looking forward to at the end of those 27 months to move into production.”