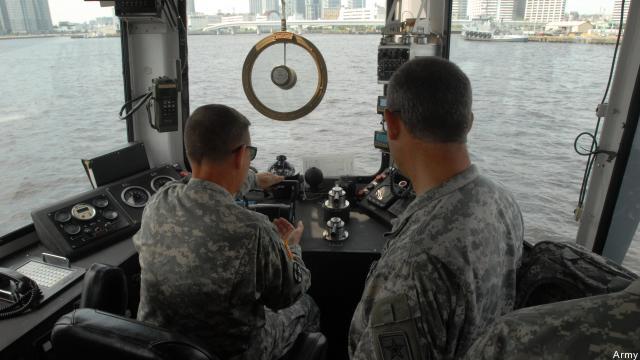 ARMY WAR COLLEGE: For the last decade, the Army has emphasized “boots on the ground.” Large numbers of foot troops slogged through valley and village, field and town, to safeguard civilians and hunt insurgents. Now, as the largest service looks beyond Afghanistan, a classified wargame about a hypothetical Korean conflict shined a spotlight on high-speed, long-range assets such as air defense missiles, guided artillery, and the Army’s own fleet of boats.

“When you think about landing craft, like Saving Private Ryan, most of those reside in the Army, actually,” Maj. Gen. Bill Hix, director of concept development at the Army Capabilities Integration Center, said in a conversation with reporters here.

“It’s not terribly sexy,” Hix said, “but there’re some new Army watercraft [that] we’ve used to maneuver forces around in this operation very agilely.” In a hypothetical scenario involving weapons of mass destruction, Hix said, the Army’s mini-Navy “allowed us to get after a series of key places where WMD was suspected to be, very rapidly… while at the same time splitting the focus of the enemy” with simultaneous strikes at multiple points along the coast. What’s more, when coupled with a kind of movable harbor called the Joint Logistics Over The Shore (JLOTS) system, the Army’s small, fast watercraft allowed US forces to reduce their dependence on large and easily targeted seaports.

“This is not something magic,” Hix told reporters. “This is something we could buy in the next eight years with no problem.” (Giving Washington’s inability to figure out the budget, though, the Army may not be able to afford to train the forces it has, let alone acquire anything new).

While Hix declined to name the nuclear-armed failed state in the classified scenario, the particular value placed on watercraft was another clue that it was North Korea, a narrow landmass with two long coastlines, rather than Iran or Pakistan, whose core territories are well inland.

More globally applicable were insights about long-range artillery and missile defense. Both arms were largely neglected in the last decade of guerrilla warfare; in 2008, a trio of artillery officers even referred to their once-preeminent specialty as “a dead branch walking.” But they’d both be essential against an adversary armed, not with roadside bombs, but with SCUD-style missiles and main battle tanks.

“There may be armored vehicles that an adversary might have, but mixed in with the population,” said Hix’s boss, Lt. Gen. Keith Walker, director of the Army Capabilities Integration Center and deputy chief of the Training and Doctrine Command, TRADOC. Whether the adversary is a nation-state that seeks to shelter its forces from US firepower by hiding them in densely populated cities, or a non-state group with heavy weapons like Hezbollah, such a “hybrid” enemy mixes aspects of guerrilla and conventional warfare.

“It is a very different problem set,” Walker said, and it requires a very different kind of training. After years in which the Army’s celebrated combat training centers focused on painstaking simulations of counterinsurgency in specific areas of Afghanistan and Iraq, Walker said, they will now replicate a kind of hybrid threat. Even units assigned primarily to advisory, humanitarian, and partnership-building operations in a specific part of the world — the new regionally aligned brigades — will first go to the training centers for these “decisive action” wargames, as the Army is calling them.

One particularly painful problem of the hybrid-war scenario is the limitations it places on close air support. In Afghanistan and Iraq, ground troops in trouble could count on rapid response from bombers, fighters, drones, and helicopters. An adversary with anti-aircraft missiles, however, could fend those off and force soldiers to rely on artillery instead. So, in the Army War College wargame this week, the simulated Army units used upgraded communications networks to quickly call in long-range fire support from land-based weapons like the Guided MLRS, a precision-guided version of the venerable Multiple Launch Rocket System.

The frontline units themselves will be redesigned. Army officers confirmed the service will reorganize its infantry and tank brigades, adding an additional battalion of combat troops while centralizing some support functions now handled by brigades at higher levels, like division and corps. With more “tooth” and less “tail,” Hix said, “that brigade design gives you more punch and follow through.”

That said, while amateurs talk strategy, professionals famously talk logistics, and keeping supplies flowing in the new style of operations won’t be easy. Since 2003, Army forces have remained relatively static, each brigade assigned to secure a specific area of Afghanistan or Iraq. In a future operation, especially one to forestall an attack by weapons of mass destruction, brigades would have to move with lightning speed. That puts a premium on mobility at all levels, from uparmored trucks like the Joint Light Tactical Vehicle (JLTV) for the infantry to rapid and reliable transport for large quantities of fuel, food, spare parts, and ammunition.

“We had some significant logistics challenges” in the wargame, Hix said, “which happily CASCOM is working on now”: The Fort Lee, Va.-based Combined Arms Support Command will hold their own future concepts exercise, on “global logistics,” in April.

Playing such wargames is serious business in the armed services. The Army has a whole series of simulations, studies, and seminars planned out as part of its annual “Unified Quest” program. The highlights are this week’s “Winter Wargame,” set in 2020, and a “deep future” wargame set in the 2030s. The more you sweat in peace, the saying goes, the less you’ll bleed in war.